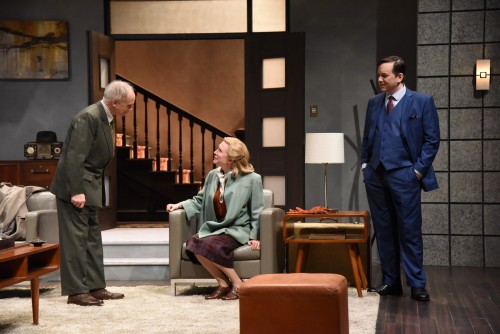 A perfect murder is hard to achieve. Lord knows I’ve thought about it.  In Frederick Knott’s gripping play, Dial ‘M’ for Murder, which in 1954 was adapted to the screen with Alfred Hitchcock at the helm, it appeared that the perfect murder had been crafted…but not so fast. Nothing is perfect, just like nothing is for free.

The Olney Theatre Center is presenting Knott’s classic play in a taut, well-staged and performed mystery under the masterful direction of Jason King Jones. Dial ‘M’ is not the typical whodunit since the audience is already primed on how and why the crime was committed.  Its strength lies with how Inspector Hubbard (played superbly by Alan Wade, a 44-year veteran of the Olney Theatre Center) puts the pieces together to eventually solve the case.

…the building drama and tension will leave you at the edge of your seat.

Even if you saw the movie version, the building drama and tension will leave you at the edge of your seat. The play has its share of blackmail, greed, jealousy, deception and a considerable amount of brandy consumed by the characters.  Keys, love letters, stockings, hand bags, an attaché case, scissors, and a rotary telephone all play a hand in this edgy mystery with a little dose of well-placed comedy sprinkled throughout.

Set in 1952 London, ex-tennis pro Tony Wendice (Ashley Smith) plots to off his cheating wife, the wealthy socialite Margot Wendice (Nisi Sturgis) to inherit her money. He follows an acquaintance from Cambridge University Captain Lesgate or the alias C.A. Swann (James Konicek) to gather the goods on him so that he can blackmail him into killing Margot in an intricately detailed scheme.

Of course, the murder doesn’t go off as planned. If it had, the play would have ended in less than an hour.  The twists and turns, the circuitous route Inspector Hubbard takes to solve the case and the outstanding technical support make this a must-see occasion.

All the action takes place in the mid-century modern living room of the large London flat belonging to the Wendices. Charlie Calvert designed an attractive and functional set whereby every piece of furniture, every lamp, every door and, of course, the bar, has a role in the play’s visual appeal and action.  There is a secondary set consisting of a staircase outside the front door that serves as a “key” part of the plot.

Then there is Sonya Dowhaluk’s lighting design, which effectively utilizes fading, blackout and brightening techniques as well as the mysterious silhouette effect outside the front door to augment the dialogue and action.

Adding to the dramatic atmosphere is the mystery-style background music similar to what is heard in cinema. It’s a great touch and Sound Designer Roc Lee pulled it off brilliantly.  Mr. Lee also provided the sound of off-stage voices including those from the other side of the phone.  The performers are mic’d well with their lines heard with clarity.

A good play with superior technical elements deserves solid acting, and the ensemble cast of Dial ‘M’ for Murder does not disappoint.  Thanks to dialect coach Zachary Campion, the performers consistently maintain British accents throughout their on-stage adventures.

Ashley Smith convincingly plays the antagonist Tony. His exchange with Captain Lesgate/ (James Konicek) when he conjures up one Lesgate/C.A. Swann misdeed after another to blackmail him is one of the play’s highlights.  Mr. Konicek is splendid in that scene, which helps to make it work so well.

On stage through most of the play, Mr. Smith demonstrates the poise and confidence of the former professional athlete that he plays and a command of virtually every scene with his dialogue and movements.

Nisi Sturgis, as Margot, wins the audience over. Though she had been involved in an extramarital affair with American murder mystery novelist Max Holliday (Cameron McNary), Ms. Sturgis’ Margot elicits sympathy as the intended victim in this caper and the one who is ultimately wrongly accused. Mr. McNary does a good job as Max.

Alan Wade shines as the intrepid Inspector Hubbard. Toying with his suspects (first Margot then Tony) and feeling them out as the investigation proceeds, Mr. Wade elicits fond memories of TV’s Columbo character (“One more question, please”).  Tenacious and clever, Mr. Wade gives heft to Hubbard.

All in all, the Olney presentation of Dial ‘M’ for Murder is a riveting experience and patrons are sure to have a jolly good time even with a killing on the stage.