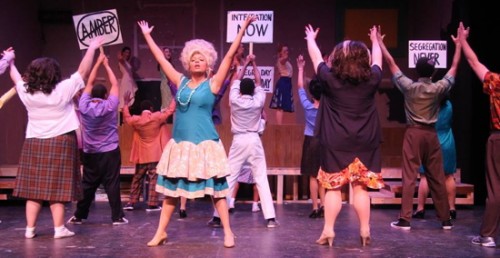 The Port Tobacco stage is set in 1960’s Baltimore, when rock and roll was steadily becoming all the rage and a new scene was ready to begin. Tracy Turnblad (Emily Gilroy) awakes from her slumber to start a new day and a bit of commotion in this Broadway musical based on the John Waters film and directed by Suzanne Donahue.

The interesting thing about this show is that there is still relevance of the two main conflicts in this show in modern-day society, racial conflict/equality and body image/judgments. I wish I could say this was a glimpse into a much different past. But, I think everyone following the news today knows that these are still two very ugly truths in our world.

The relationships between the characters are genuinely played and fun.

The story takes us through Tracy’s obsessions with dancing on the Corny Collins Show and winning the love of the show’s heartthrob, Link Larkin (Taylor Scott Hines) despite the fact that he is already romantically involved with the show’s favorite, Amber (Emmeline Jones.) Then, there’s Amber’s evil racist mother, Velma Von Tussle (Amy Wathen Cooksey) who does everything she can to sabotage Tracy and her ridiculous ideas of starring in or integrating the dance show.

A lot of the real heart of the show is introduced when Tracy gets sent to detention (and “special ed”) with the colored kids, where she meets the smooth moving Seaweed J. Stubbs (Charles Watley) who teaches Tracy his signature move, which ends up being her ticket onto the dance show. But, that’s not all she learned. She also learned about the talented kids left behind because of the color of their skin and vows to do her part to end segregation on the show.

The relationships between the characters are genuinely played and fun. But, the award for show stopping duo onstage goes hand down to Tracy’s parents, Edna and Wilbur played flawlessly in brilliant comedic fashion by Quentin Nash Sagers as Edna and Benjamin Simpson as Wilbur. Their duet “You’re Timeless To Me” deserves a standing ovation and was worth the price of admission for that song alone.

There are also several other stand out performances I feel compelled to mention. Frankie Brown (as Motormouth Maybelle) has a very moving performance of “I know where I’ve Been” and Emmeline Jones’ naughty mean girl performance of “Cooties” was spot on terrific. Melody Bishop’s performance as Tracy’s airhead bestie, Penny was priceless, especially with her coupling with Seaweed, much to the dismay of her neurotic, racist prude mother, Prudy Pingleton, played in absolute hilarity by Brenna Prestidge. Tessa N. Silvestro also contributes a montage of zany characters including a hardcore jail matron and a psychotic, racist lesbian gym teacher.

The costumes by Carol Russell are spot on along with makeup and hair, designed by Jen Branham. The sets by Chris Magee were simple but perfectly executed.

I sat behind a young elementary school child, who seemed to be enjoying the show. During intermission, I decided to ask him what he thought about the show. Jasper, of LaPlata, Md. said that he thought it was really funny and that his favorite character was the mom (Edna, played by Quetin Nash Sagers.) Evidently, Jasper attended Port Tobacco Players’ annual summer camp, Camp Mockabee and Sagers was one of his counselors. So, I imagine that would be pretty funny getting to see him up on the stage, in drag no less!

I spoke to another young lady after the show, Jackie Halickman, a 4 year old from Waldorf, Md. She was anxiously waiting to meet Emmeline Jones, who played the villain, Amber. I asked why she liked the mean girl so much. She simply replied,” Cause she was pretty and wore a crown!” Just proves my point, from the mouth of babes- what is touted as acceptable, a beautiful face – regardless of attitude and prejudice, kids look up to that. So, we kind of need to take that message away from this show! I’d like to think we have evolved a bit in the last 50 years!

The play is produced through special arrangement with Music Theatre International (MTI). The book is by Mark O’Donnell and Thomas Meehan. Music is by Marc Shaiman with lyrics by Scott Wittman and Marc Shaiman.