Theatre Review: ‘Harry and the Thief’ at Strand Theater Company 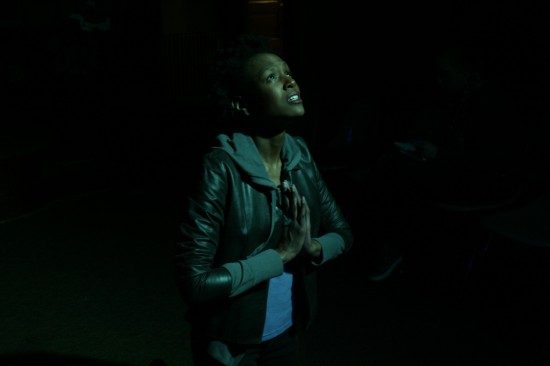 We think of Harriet Tubman as the brave woman who risked her life to lead hundreds of slaves to freedom along the Underground Railroad. At least, that’s what we’ve read in our history books. What if Harriet, or Harry for short, was a little lonely at times? What if she was a bit conceited? Perhaps she was fed up with some of her charges and wanted to quit to find a new life? These are the questions posed by Harry and the Thief, a time-twisting comedy by Sigrid Gilmer, brilliantly produced and performed by Strand Theater Company in Baltimore.

…Strand Theater has done an excellent job in casting this ensemble.

Strand Theater produces plays that celebrate women’s voices. Harry and the Thief is no exception, with two strong female characters from different eras, Mimi and Harriet Tubman, driving the events of history. Mimi, who lives in modern America, has just been bailed out of jail by Jeremy, her eccentric cousin. Jeremy has developed a time machine, and wants Mimi to go back in time to supply Harriet Tubman and her followers with guns, inciting a rebellion. Opposed to the idea at first, Mimi agrees to the job, and travels back in time to find Harriet.

We are soon introduced to the zany cast of characters living and working on a Maryland plantation in 1858. After a series of hilarious incidents in which the slaves on the plantation dupe their masters, they join Harriet Tubman on a journey to freedom. When Mimi finally catches up with the crew, she is surprised to find that Harriet doesn’t want to be the leader of this rebellion. In fact, she wants something quite different. Gilmer has managed to weave together a variety of absurd and endearing sub-plots, including one in which Orry Main Scarlet (the plantation owner, played by Frank Mancinco), accidentally ends up in the present with Jeremy.

The play opens with a trailer for Harry and the Thief, which is actually performed as if it were a TV show in front of a live audience (us). Anita (Samy el-Noury), the show’s director, is everywhere at once, giving acting direction and handing out props, all while delivering a hilarious side commentary for the audience. Characters on the TV show occasionally drop character and speak directly to the audience. One poignant instance is when Overseer Jones (Alexander Scally) breaks down and assures the audience that he is not, in fact, racist.

Harry and the Thief is a knot of a play, and it would be easy to lose track of the various intertwining plots and ideas if it weren’t for the inventive direction and talented cast. Director Susan Stroupe has actors running around the audience hiding in nooks and crannies, and chasing each other around the balcony. The action surrounds the audience, which makes for an exciting and lively performance. Sound design by Max Bent creates a cinematic feel to the play, with sweeping adventure film music and time machine sounds. Lighting Design (Adrienne Gieszl) and Sets/Props (Kate Smith-Morse) switch deftly between present day and 19th century Maryland wilderness. Costumes by Mika Eubanks are extraordinary, especially those of Anita, who seems to be wearing a new fabulous outfit every time she enters the stage. Maddox’s pants are also to be applauded, along with more comfortable-looking outfits the women change into on their journey to freedom.

Harry and the Thief is all about its quirky ensemble, and Strand Theater has done an excellent job in casting this ensemble. Monique Ingram is enchanting as Harry, playing her with a soft-spoken strength and depth. Opposite Ingram is Aladrian C. Wetzel (Mimi), whose energy and spirit are fun to watch, especially in scenes with Ingram. Madison Sowell as the smooth talking Maddox and Trustina Fafa Sabah as the cheerful cook Shilo are another engaging duo, whose love story is both charming and amusing. Alexander Scally stands out as the blundering Overseer Jones, who runs after Vivian (the lively Zipporah Brown) in a futile attempt to win her love, all while carrying their ill-gotten baby to his chest in a 19th century baby bjorn.

Harry and the Thief is an ambitious play that challenges the way we think about American history. I hope Strand Theater will continue to produce plays like this one in the future.