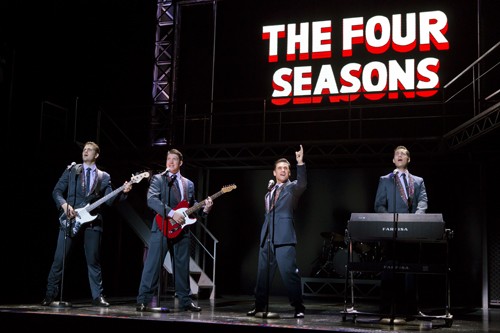 The juggernaut of Jersey Boys – the Tony and Grammy Award-winning musical based on one of the most successful American pop groups of the last century, The Four Seasons – shows no signs of stopping. It is the winner of 57 major awards worldwide. To paraphrase what lead singer Frankie Valli says about himself towards the end of the show: like that bunny on TV with the battery, it just keeps on going and going and going.

Last year the musical celebrated its 10th year, riding up the charts as one of the longest running shows on Broadway. There are standing companies in Las Vegas and London. Since 2007, the Jersey Boys tour has been crisscrossing the United States, Canada and the world, garnering accolades along the way. And Frankie Valli is still on the road. (He will be coming to D.C. in October). From rap covers, TV shows, movies to commercials, the music of Frankie Valli and the Four Seasons has been – and still is – the soundtrack to many of our lives.

…Jersey Boys is a brilliantly constructed piece of theatrical entertainment.

Lucky for Washington, D.C. theater goers, the “boys” are back in town for a third visit. Previously, the First National Tour had successful runs in the nation’s capital in 2009 and 2011. This time around, the Second National Tour comes with a new cast and the same tight, fast-paced production, chock-full of showstoppers that still bring the audience to its feet.

Often labeled a “jukebox musical,” the story is solidly based in fact and, but for a few liberties, the music the group produced is chronological. The plot is not fabricated to fit the songs as in the musical Mama Mia that used the hits of Swedish super-group ABBA. In this case, fact is better than any fiction. Skillfully written by Marshall Brickman and Rick Elice and stylishly directed by Des McAnuff with choreography by Sergio Trujillo, Jersey Boys is a brilliantly constructed piece of theatrical entertainment.

But it is the music of original member Bob Gaudio, a man with as much business sense as talent, and lyrics by producer Bob Crewe (often considered the Fifth Season) that drives the plot. It is the rags-to-riches-to-rags-to-riches rollercoaster ride of four guys from the New Jersey projects where the only options were joining the army, getting mobbed up or becoming a star.

As befitting their name, the story is told through the point of view of each of the band members, often speaking directly to the audience. Each section is cleverly done in the colors of the four seasons of the year (with beautiful costumes by Jess Goldstein to match) starting with spring and Tommy DeVito (a solid Matthew Dailey). Tommy is already a minor criminal, at the beck and call of mob boss Gyp DeCarlo (Thomas Fiscella in a fabulous turn). With his trio that includes the Eeyore-like and self-professed “Ringo” of the band Nick Massi (a very funny Keith Hines) on bass, Tommy discovers little Francis Castelluccio, AKA Frankie Valli (Aaron De Jesus, who performed the role of Joey for three and a half years with the Las Vegas company) and his amazing falsetto. But the group doesn’t gel until Joey (Jonny Wexler) – I won’t spoil the surprise of this character – hooks the guys up with Bob Gaudio (a charming Drew Seeley) who already had a teen hit with “Short Shorts” at 15 years old. When each of the boys joins Gaudio in “Cry for Me” for the first time, the blend of voices is pure magic.

Fortune starts to change when the group meets up with the marvelously flamboyant music producer Bob Crewe (the wonderful Barry Anderson). After paying their dues as backup singers and finally landing on a permanent name for the group, what follows is an amazing trifecta of hits – “Sherry,” “Big Girls Don’t Cry,” and “Walk Like a Man” ­– that shoots the boys to the top. It is only the beginning of the parade of astonishing chart-toppers recorded by Frankie Valli and The Four Seasons. There are approximately 30 in this show and there are many more that couldn’t fit in this production.

Young Bob Gaudio was a shrewd businessman from the start and forward thinker. He and Frankie formed a partnership on a simple handshake that has lasted for over 45 years and counting, splitting the earnings they each made outside the group. It is no surprise that with the band’s meteoric rise and the pitfalls of fame, things started to fall apart. Problems with women, money, rivalries and tragedy touch them all and Frankie Valli takes on a huge debt and has to rebuild his career, thanks to the shady dealings of Tommy DeVito. Eventually it all paid off with the road leading the group to the Rock and Roll Hall of Fame.

As Frankie Valli, Aaron De Jesus has earned his wings. He is both a fine actor and singer, honoring the sound that made Valli such a pop icon. This is such a demanding role, you can also see local boy, Miguel Jarquin-Moreland who is a veteran from the First National Tour and a Catholic University grad, perform as Frankie in several matinees during the run.

Hats off to the Jersey girls – Kristen Paulicelli as Mary Delgato, Frankie’s first wife; Leslie Rochette as Francine, Frankie’s daughter; and swing Jenna Nicole Schoen (who performed on press night) as Lorraine, Frankie’s girlfriend. Together they play 46 female roles between them. It is also important to note that most of the cast members play multiple characters and many also perform their own instruments as well as move set pieces and props. It is a testament to the energy and talent of this group of actors – and the dressers!

The only thing that suffers with this tour is a fast-food version of the set originally designed by Klara Zieglerova. Perhaps it is a cost-cutting measure, and/or it has been trimmed down for smaller theaters and shorter runs. The projections – which started out as lively, visual punctuations of songs and action using the comic strip style of contemporary pop artist Roy Lichtenstein – have been expanded to replace many set pieces. Other set pieces have also been downsized. It may not make a difference to the novice, but for those who remember the first tour or have seen the show on Broadway, it is, at times, disappointing. That said, it is the story, the music and multi-talented cast and crew that buoys the production to great heights. There is no doubt that the appeal – and run – of Jersey Boys will continue to endure and leave audiences singing in aisles as they leave the theater.