Theatre Review: ‘Journey to the West’ at Constellation Theatre Company 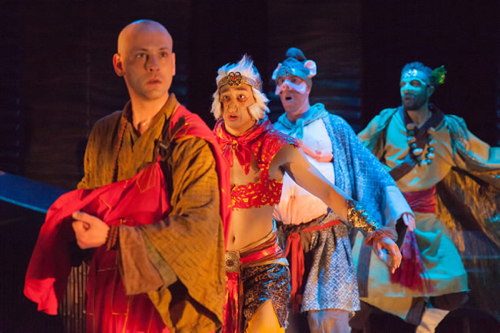 For many of us who got our start on the Washington, D.C. theater scene back in the 1980’s, it really is amazing to return to the Source Theater on 14th Street.  The once-gritty, cavernous, drafty old space is now intimate and well-appointed, and the jaw drops at all the trendy bars and eateries nearby.

But the best part by far is the shows themselves.

If you think the bloom is off the cherry blossom trees, guess again:  Journey to the West is a delightful bouquet, well worth savoring.

Over the years Allison Arkell Stockman, Constellation’s Founding Artistic Director, has attracted many of the city’s most talented young performers and honed their skills to near-perfection.  We now have a number of companies – Synetic, Flying V and Faction of Fools to name just three—that have re-energized the theater scene with their emphasis on movement, offering an alternative to the traditional spoken drama (which is OK, mind you, but is not everything that theater can be).  Stockman has the ability to pluck some of these small company’s finest movers and shakers from all over town, and create performance teams that look as if they’ve been together for years.

No production reflects Stockman’s exciting artistic vision better than her latest effort, Mary Zimmerman’s epic play Journey to the West.  Based on a legend that grew out of the transmission of Buddhism from India to China, Journey is a delightful, action-packed show that will be a delight to young and old alike.  With a new, live musical score composed and performed by Constellation company member Tom Teasley, you will be treated to a magical tale.

For the kids, Journey will be a great introduction to one of Beijing Opera’s most famous characters, the Monkey King, who tumbles, fights and farts his way through many a grand adventure.  As the Monkey, Dallas Tolentino cements is reputation as one of the city’s great movers (complete with an ‘origin story’ to rival any of those Marvel Comics heroes).  Tolentino’s energy and good humor are infectious and carry the show from start to finish.

Journey follows the fortunes of Monkey and the monk Tripitaka, played here with touching simplicity by Ashley Ivey.  Tripitaka has been given the Herculean task of traveling many thousands of miles to the Holy West (i.e., India) to retrieve three sacred scrolls through which the wicked empire in the East (i.e., China) can reform itself and achieve salvation.  Joining him on this journey are three unlikely superheroes—Monkey, Pig (the hilarious Ryan Tumulty) and Sha Monk (the energetic Michael Kevin Darnall).  Together this foursome overcome obstacles and fantastical monsters galore; but this being a play about Buddhism, often the greatest obstacles to Tripitaka’s success lie within.

[An aside:  if at this point you are detecting traces of Dorothy in Oz, that’s hardly coincidental.  Just remember that Tripitaka came first, by a long shot.]

There are many stand-out performances here, too many to count, but let me just mention Lilian Oben’s statuesque Guanyin and Jacob Yeh’s sober Jade Emperor among them; the supporting cast for Journey deserve a special shout-out, constantly changing costumes and creating some truly hilarious vignettes, with vaudeville-like schticks galore.  And Kendra Rai, who has already proven her talents several times over, truly out-does herself with a myriad of costumes and finely-executed masks.

If you think the bloom is off the cherry blossom trees, guess again:  Journey to the West is a delightful bouquet, well worth savoring.