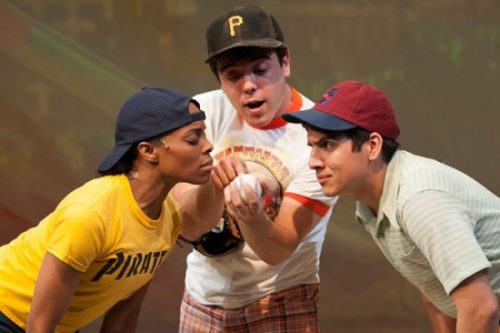 Musicals about baseball and particularly baseball players as a rule have never been totally successful as stage pieces. Damn Yankees is of course an exception but that show invented a story around a real baseball team. In 1981 there was a musical about Jackie Robinson called The First and while there were some great things in it musically and performance wise, the show as a whole did not work and only ran 37 performances.

Imagination Stage’s current offering Looking for Roberto Clemente is another attempt to make a musical about a famous baseball player hit a home run and like The First the musical sections and performances are ultimately what knocks it out of the park.

It is 1972 in Pittsburgh and Puerto Rican born baseball player Roberto Clemente (Jaysen Wright) is about to get his 3,000th major league hit while playing for the Pittsburgh Pirates. Among the fans listening on their radios (before live streaming people sat in front of this box that had sound coming out of it) that day is Sam Kowalski (David Landstrom) who wants to play baseball but doesn’t think he is good enough. Sam has two friends. There’s Charlie Gunston (Eben K. Logan) who although she is female, has a mean swing and is as good at baseball as any male and Peter (Phillip da Costa) who despite his attempts and great attitude isn’t necessarily cut out for baseball. Everything changes for Sam when Clemente’s 3,000th hit lands in Sam’s bedroom..literally. With this baseball, it appears that Sam is now a fantastic pitcher and along with Charlie is drafted by the number one Little League team called the Barracudas. The team consists of Captain Joe (Calvin McCullough) who has a winning is everything attitude, Noah (Ian Anthony Coleman) who is Joe’s yes man and pitcher and Tommy (Scott Callahan Lesmes at my performance) who is Noah’s brother and batboy who just wants to play rather than just carry the bats. When Charlie is asked to leave the Barracudas just because she is a female, she starts her own team with Peter and Tommy called Los Amigos (The Friends.)

Because this play is set in 1972, certain things in the script by Karen Zacarias feel very uncomfortable by today’s standards. The biggest one is the way that the character of Tommy is talked about. In the script Tommy is described as “different” without explaining what the difference is. Also, the pivotal moment where the Barracudas and Los Amigos meet in a championship game never has a payoff. This is due to the events of that day in which Clemente was flying a mercy mission to Nicaragua to help earthquake victims. His plane vanished and was never found.  I understand what Zacarias is trying to do in showing the effects it had on the people of Pittsburgh but I did want to know who ultimately won that game.

While the script hits a double at best, the performances are all home runs. David Landstrom’s portrayal of Sam is endearing and shows all the want that the character is yearning to have.

Eben K. Logan as Charlie has that tomboy I can do anything spunk and totally takes charge when she has to.

Phillip da Costa as Peter has that go-get-em attitude that just makes him totally endearing. His support of his friends never wanes.

Calvin McCullough and Ian Anthony Coleman as Captain Joe and Noah give us strong portrayals of characters whose thinking about what women can do is prehistoric.

While the stereotypically drawn character of Noah bothered me it didn’t stop me from enjoying Coleman as a performer. In other words, don’t shoot the messenger.

Scott Callahan Lesmes only has one line in the show that is repeated throughout. However his “I want to play” speaks volumes and puts out a message about acceptance of all that everyone should follow.

Last but not least, with Jaysen Wright’s powerful performance as Roberto Clemente, we see the man behind the legend and what a great humanitarian Clemente was. I actually wanted the script to delve even further into this element but can’t have everything I guess.

Deborah Wicks La Puma has once again given us a lively and fun score with Zacarias providing the equally strong lyrics.

I especially enjoyed Ivania Stack’s 1970’s wardrobe choices featuring bellbottoms and begs the question, “What were we thinking?

There are many good things in this production that you and your family will enjoy but overall, Looking for Roberto Clemente swings for the fences but  falls short of a home run just like the stage productions about baseball that have come before it.

Looking for Roberto Clemente runs through May 22nd 2016 at Imagination Stage, which is located at 4908 Auburn Avenue Bethesda, Maryland 20814. For tickets, click here.