Theatre Review: ‘Mystery of Love and Sex’ at Signature Theatre 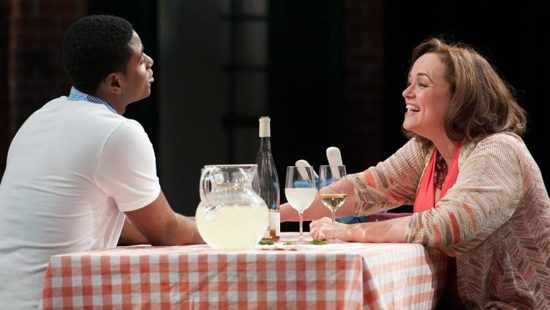 The play revolves around Charlotte, a young woman about to graduate from college whose burgeoning sexuality is complicating her relationship with her best friend, Jonny, and her mother and father.  The play explores the nature and morality of human sexuality, but more than that it explores the nature of all human connection. The way that Jonny takes Howard’s literature apart, and discovers everything wrong with it, is analogous to what the characters do to each other throughout the play. In spite of this evisceration of relationships, the play never veers too far away from the humor of humanity. The words are masterfully crafted and the theatre artists handle them with finesse, on building relationships that transcend the bounds of our “census identity.”

The connections of this stellar cast are real. Shayna Blass creates a believable human character in Charlotte, a young woman struggling with her sexuality, and with her relationship with her best friend. Her emotion and self-evisceration is palpable throughout the play, but the moment where she really cuts to the bone is when she describes to her mother her decision to attempt suicide.

Xavier Scott Evans’s Jonny blossoms before our eyes from a timid college virgin, to a mature young man finally comfortable in their own skin. Evans brings an intelligence to the character, and a compelling physicality to this character that dwells very much in the interior realm.  The confrontation scene at the climax of the play between him and Howard is phenomenal. He can be seen on Netflix’s new show The Characters.

Jeff Still, fresh from Broadway’s Fish in the Dark with Larry David, adds gravity as Howard, Charlotte’s father who is also a detective novelist. He serves as the character that each of the other characters set their emotional foundation on, and he falters in a way that is distinctly human and raw. Emily Townley is Lucinda, Howard’s wife and the disenchanted mother of Charlotte.  She was previously seen in Totalitarians, which earned her a Helen Hayes nomination for best actress. She eases into the role, like a cat eases into a spot of sunlight. A true joy to watch.

David A. Schmidt, previously seen in Henry V on the Shakespeare Theatre stage, has a comedic cameo as Howard’s Father.

The Technical team is full of District of Columbia stars as well. Their designs emphasize the intimacy of the play, and mirror the inner conflict of the characters. For example, the three-quarter thrust stage was challenging in the beginning scenes—at one point each quarter of the audience had a character’s back staring at them. But just like the characters, James Krozner’s set design opens up to the audience.

Asta Bennie Hostetter’s costume design worked to establish the characters’ arcs. From the free-flowing numbers of Lucinda that echo in Charlotte’s design, to the evolution of Jonny’s costume, from a loose consuming outfit into the more fitted design of his wedding outfit.

Jesse Belsky, whose work includes the recent Folger Theatre production of A Midsummer Night’s Dream, orchestrated the lights, from the moustache Christmas lights of a college dorm, to the sunlight strewn by the backyard trees, and the lovely decorations of backyard wedding. James Bigbee Garver’s sound design included gorgeous music bookending the scenes, and lovely birds and outdoor sounds of a Georgia backyard.

All in all, this play was unexpected, humorous, and most importantly, truthful. A perfect blend of comedy and drama, and a truly memorable theatrical experience. For a theatre that prides itself on immersive musicals, it has truly hit the nail on the with this intimate production.