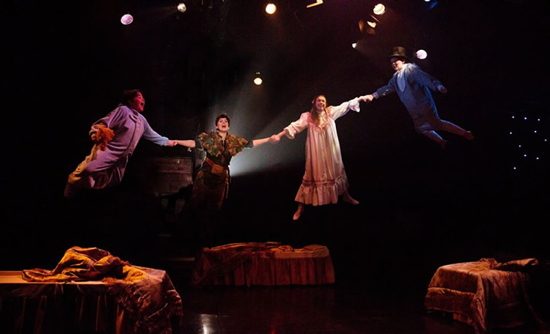 An evening of flying through the sky, thrilling dance steps, robust voices and captivating actors can be found in the musical Peter Pan at Toby’s Dinner Theatre in Columbia.

This timeless musical is based on James M. Barrie’s 1904 novel about a young boy who refuses to grow-up, yearns for the love of a mother and has a spirit powered by adventure. When Mrs. Darling catches Peter in the Darling’s nursery, he frightens her so much that she rips Peter’s shadow from him and hides it in the dresser drawer. Peter flees but returns for his shadow the next night, only to find the Darling children, Wendy, John and Michael.

An evening of flying through the sky, thrilling dance steps, robust voices and captivating actors…

When Wendy (an energetic and fun Katie Tyler) first meets Peter, he is trying to reattach his shadow with soap. Wendy agrees to help and sews his shadow back on. Wendy wakes her brothers, and during the song, “I’m Flying,” the children see Peter fly through their room. They want to fly as well, and after they hear of Neverland, Peter’s home, they want nothing more than to go with Peter.

Peter teaches the children to fly (flying effects created by Hall Associates Flying Effects), but only after first obtaining Wendy’s promise to act as surrogate mother to Peter’s friends in Neverland, The Lost Boys, and tell them stories every day. The adventure then begins as Peter leads the three little Darlings to Neverland, via the second star to the right and straight on ’till morning. In Neverland, they run into trouble when they meet Captain Hook, his crew of pirates, Indians and a man-eating crocodile.

With Toby’s following Broadway tradition, a woman, MaryKate Brouillet, plays Peter Pan. She is one of the best Pans I’ve seen on stage, and I’ve seen a lot. The energy, eagerness and voice come together to form what I always thought Peter Pan would be if he ever flew through the night and took me with him to Neverland.

The Lost Boys, AJ Whittenberger as Slightly, Jordan Moral as Tootles, Scean Aaron as Curly, Chris Rudy as Nibs, RJ Pavel as Dibly, are fun to watch as they dance and sing through musical numbers. The Indians, lead by Amanda Leigh Corbett as Tiger Lily. emphasize the strong chorography. The pirates, David James as Smee, Jeffrey Shankle as Starkey, Anwar Thomas as Cecco, Darrren McDonald as Noodler, Brook Urquhart as Mullins and Andre Hinds as Jukes, also wow as they dance along the decks of the pirate ship Jolly Rodger.

The overall magic in this show has a lot to do with the production staff. Co-directors, Toby Orenstein and Mark Minick use the theatre-in-the-round space well so that each and every audience member has the best seat in the house. Choreographer Mark Minnick’s dance steps keep up with the energy of the songs and add to the fun.

Lawrence B. Munsey and Mary Quinn’s costumes were wonderfully made and designed. I especially like the Indians’ dresses. Each performance is accompanied with a live orchestra that enhances all the vocals.

I obviously enjoyed this show tremendously and recommend it highly, and to top it all off, there is all the food you can eat. It doesn’t get much better than that!