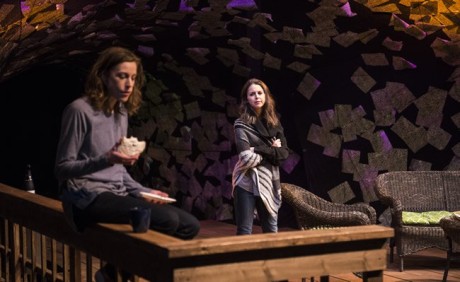 Almost everyone has lost someone they love. The aftermath can be bewildering. Playwright David Auburn’s Proof delves headlong into the repercussions of loss, love, genius and madness for one Chicago family. Replete with accolades, Proof won the 2001 Pulitzer Prize for Drama and the Tony Award for Best Play, among others.

Proof’s opening tableau features Catherine (Katrina Clark) asleep on her family’s deck after midnight. It’s the eve of her 25th birthday and the day of her dad Robert’s (Ray Ficca) funeral. Catherine is lost after years of caring for Robert, a legendary, mentally unstable, mathematician. Catherine’s grief is further compounded by the arrival of her dad’s meddling former student Hal (Sam Ludwig) and her well-meaning sister Claire (Liz Osborn).

Astonishing epiphanies, new loves and old family grievances dissect Catherine’s person as Proof soars fluidly back and forth throughout the years. It soon becomes clear that Catherine has inherited her dad’s tendencies towards genius and madness; but just how much has Catherine inherited?

The University of Chicago in Hyde Park served as Auburn’s inspiration for Proof’s physical setting. The play’s fixation with the correlation between age and academic productivity was bolstered by legends surrounding Hyde Park academics who had “slipped off the tracks” as age descended upon them. Proof’s characters typify the University of Chicago’s proclivity towards eccentricity and academic anxiety.

Auburn’s characters confront each other on Robert’s deck. Set & Costume Designer Kathryn Kawecki’s set is provocative; dreamlike yet realistic. The focal point of Kawecki’s set is a large, brown, wooden deck, complete with the kind of deck furniture I would find on my parent’s back deck. A net sporadically covered in sheets of loose-leaf paper, surrounds the deck like a halo, funneling inwards towards the back of the stage. As characters walk into the house, they are walking into the mouth of a cyclone. Provocative, evocative and illusory, Kawecki’s set is concurrently redolent of trees overhanging a deck, symbolic of the instability of Catherine and Robert’s household, and suggestive of the flow of time. More than that, it is just beautiful and further enhanced by Lighting Designer Robbie Hayes’ colorful and expressive light design. Together, Kawecki and Hayes manage to effortlessly shift time, place and atmosphere. Only the geniuses at 1st Stage could craft a set that is simultaneously so many different worlds.

Proof affords Clark very little downtime. As Catherine, Clark plays many different roles; devoted daughter, exultant lover, erstwhile student and estranged sister. Up against so many obstacles, Clark’s Catherine is exhausted but explosive. Despite the challenges Clark faces as Catherine, Clark aptly exhibits an impressively versitile kaleidoscope of emotions. Ludwig’s Hal is a lovable, likeable nerd and Clark’s perfect counterpoint. The entire cast is making their 1st Stage debut and yet, not halfway through Proof’s run, they have already found an demonstrably comfortable balance among one another and worked out any awkward kinks.

There is very little not to like about Proof. In the capable hands of 1st Stage veteran Director and current Artistic Director Alex Levy, Proof captivated for a very swift moving two hours. Rife with allusions to mathematics, Proof remains accessible as long as you know the definition of a prime number (wink, wink). Now in its eighth (stellar!) season, 1st Stage has become one of my favorite DC area venues for consistently thought-provoking and compelling plays, minus any pesky, disingenuous gimmicks.