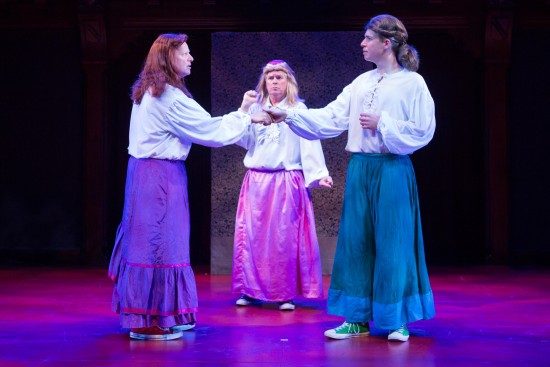 You may gain new appreciation for the old saying, “practice makes perfect,” while watching the Reduced Shakespeare Company’s performance of William Shakespeare’s Long Lost First Play (abridged), co-written and directed by Reed Martin and Austin Tichenor, and performed by the same, along with Teddy Spencer. Even Shakespeare, as this (fictional) play presents him, evidently had a lot to learn from writing that very first work—a monstrous mash-up of just about every other Shakespearian production imaginable. But surely our three actors who took on the herculean act of performing the thing could not have done so without an extra measure of practice themselves. Even their severely abridged version still left them with at least 10 characters to portray—each.

…this is gateway Shakespeare that may lead to a lifelong addiction.

The discovery of a long-lost play would be the Shakespeare enthusiast’s dream. This play not only humors that dream, but infuses it with humor. Think Shakespearian Into the Woods, only with more contemporary commentary, more hilarity, and (thankfully) a lot less singing. Many of your favorite characters are there—Hamlet, Juliet, Malvolio, Macbeth’s three witches—and they’re interacting with each other in the same tumbled together world. Loosely centered on a brewing magical feud between two of Shakespeare’s most arcane, mystical creatures, Puck from A Midsummer Night’s Dream, and Ariel from The Tempest, this play pulls some of Shakespeare’s most intriguing characters together as you’ve never seen, and places them center stage.

Martin, Tichenor and Spencer are a beguiling, hysterical trio who, unlike traditional Shakespearian actors, don’t take themselves too seriously. Mocking the early tradition of male-only actors, they take on characters of both sexes with boisterous enthusiasm, to the delight of the audience. While all were extremely animated, Spencer probably showed the most alacrity of the three. This cast gave new meaning to the word versatility, constantly swapping into and out of costumes that seemed surprisingly elaborate given the few seconds taken to don them, but never missing a beat. They also appeared seemed quite comfortable veering off script at times, purposefully breaking character, or cracking new jokes about recent events, the venue, or that night’s audience. Patrons in the front row should be especially vigilant—they may find themselves the butt of one.

The acting, costumes and props dominate this performance, leaving an almost entirely empty set, evidenced by the fact that there is no set-designer listed in the playbill, having been appropriately replaced by a costume designer, a wardrobe head, a three-person props team and a puppet and mask manager. *See the full crew list below. The single piece of set visible to the audience is a decorated partition in the center-rear of the stage, behind which our three performers frequently took refuge to swap costumes, props and masks between characters. Props and masks were appropriately applied, amusingly wielded, and always delivered on time—a tricky business with this production. I especially enjoyed the two-actor version of the three witches.

Like the set, sound and lighting were also lightly used, careful to accentuate and not overpower the acting, and gave just enough of a flavor of familiar Shakespearian scenes and characters as to make them recognizable. Even so, the show’s rapid fire pace demanded a nimble crew.

Martin and Tichenor obviously worked hard to cram as much content from Shakespeare’s 39 (give or take) plays into this script as possible. And while this may charm its target audience of Shakespeare aficionados to no end, it risks coming off as overbearing and esoteric to those, like me, who are not as familiar. Still, a lighter-than-normal dose of 16th century English and a generous mix of contemporary and local allusions take the edge off, making this production a sweeter deal for more diverse audiences.  At worst, this is Shakespeare that even your disinterested teenager will be hard pressed to sleep through. At best, this is gateway Shakespeare that may lead to a lifelong addiction.

Running Time: Approximately one hour and 45 minutes with intermission.