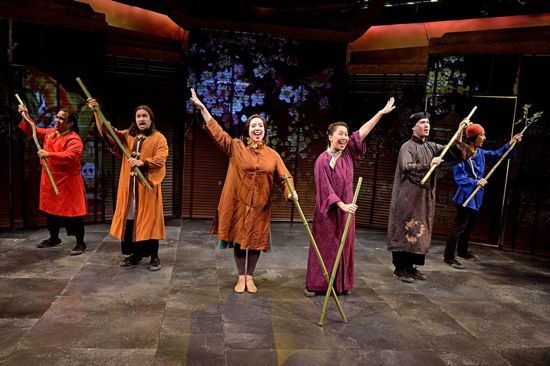 The Cast of ‘The Emperor’s Nightingale.’ Photo by Bruce Douglas.

A World Premiere Play, The Emperor’s Nightingale, sings it’s way to Adventure Theatre-MTC through May 30, 2016. This charming musical is based on the 1843 fairytale by Hans Christian Anderson, but is adapted by Damon Chua, who was selected to pen this adaption after a year national search. Natsu Onoda Power as Director helms the entire Asian cast and production staff of Nightingale.

The whole cast effortlessly displayed their joy in their characters and the story.

In The Emperor’s Nightingale, the story carries the same message of love, acceptance and truth, but Emperor does it in a way that all ages can relate to. It gently guides the viewer towards the importance of choosing a life path that benefits all.

In this updated version, set in eighteenth-century China, the nightingale does have a song, but with that song comes news of the Emperor’s people throughout his empire, and most of the news is not good. When the Emperor introduces a competition between his two sons to decide which of his sons is the best one to succeed him, the younger brother (Prince Bao) realizes the importance of finding this nightingale. His older brother (Prince Hongshi), however, tries to trick him with a mechanical bird that gives Bao misleading information. Through stumbles and triumphs, the younger brother wins by protecting those who are less fortunate. Prince Bao’s character is based on the one of China’s greatest Emperors, Emperor Qianlong.

The whole cast effortlessly displayed their joy in their characters and the story. Brett Messiora as Prince Bao played well against his older brother’s (Andrew Quilpa as Prince Hongshi) more comedic and frivolous view of running an Empire. Jonathan Frye as Minister Wu is very funny, and so is Sue Jin Song as the Empress Consort. Nadine Rousseau as the Nightingale moves gracefully around the stage and adds to the beauty of the show.

I don’t want to forget that there are Pandas (Mikey Cafarelli and Sue Jin Song) and a delightful Chinese tiger (by Properties and Puppets Designer Andrea “Dre” Moore) made in the style of the Chinese dragons seen in parades.

The Emperor’s Nightingale is part of the Asian-Pacific American Heritage Month celebration, and it is a wonderful peek into Chinese history and culture.