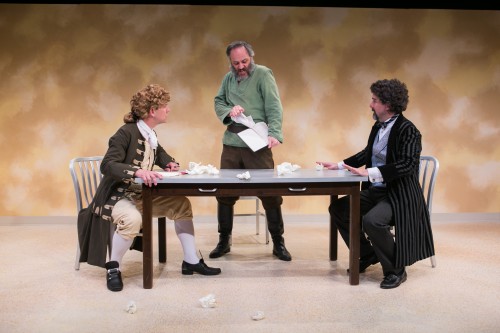 One favorite parlor game to play is let’s meet a famous person. If you could pick someone to have dinner with, who would it be? Scott Carter’s thought provoking play The Gospel According to Thomas Jefferson, Charles Dickens and Count Leo Tolstoy: Discord gives us an imaginative new twist, a sort of “Bill and Ted’s Excellent Adventure” of the meaning of life with a captive audience.

This work, the brainchild of screenwriter Scott Carter of HBO’s “Real Time With Bill Maher,” came to life after he had a near death experience. Subsequent exploration of his faith and life’s meaning brought him to study the viewpoints of these 3 literary giants.

In this Washington Stage Guild performance, the setup is that is that these three luminaries are brought together and are now together, confused, and unable to leave. Placed in a nondescript holding room, a sparse place with a table and three chairs, we begin a celestial experiment.

Discord has naturally drawn comparisons to Sartre’s existential masterwork No Exit but is sprinkled with playful comic overtones. When you have Keanu meeting Jean-Paul, one is in for a wild, mind expanding evening.

It soon becomes clear that each man had died, albeit at different times in history, and have entered this room directly after his demise. As they ponder their predicament, they bandy about the reason for their confinement and search for a connection. When formalities are put aside, the next question posed is the same one on the minds of everyone in the audience: why these three?

After a few false starts, they eventually discover what they all have in common: each man had taken it upon himself to write his own gospel. More accurately, to adjust the existing one which explains the life of Christ.

Thus begins the discourse and discord, if you will, in which we hear all three characters’ individual takes on the authenticity of the Bible, the nature of God and free will.

Brit Herring as Jefferson strikes a grandiose pose as statesman who has been described as a deist. His reason based approach wiped out the miracles as against natural law. Herring portrayed courtly gravitas and, though starting out slowly, reimposes his will and at the end provides an achingly true confession of his life–the infidelity, the slave-holding, the double standards.

Peter Boyer’s Dickens was an energetic force, full of both opinions and of himself. As Dickens the entertainer, his version of the gospel mined the grandeur of the story, the majesty of the occasion.  Boyer is well acquainted with the writer’s life and his style, performing Broadway Christmas Carol oh so many years.  In a preening sarcastic demeanor he constantly defends himself as the perfect husband and preeminent novelist of his time.

…one is in for a wild, mind expanding evening.

Steven Carpenter as Tolstoy was electric as a brooding Russian, whose socialist bent was a wonderful counterpoint to the others. As Tolstoy advocates non-violent, yet anarchist ideals, the point counterpoint is fast, furious and frivolous. “As I told my dear friend, Anton Chekhov, as I kissed him good-bye on his deathbed, ‘I hate Shakespeare’s plays but yours are worse.’”

The production, directed by director Bill Largess is nimble and at times crackles. It you were concerned with being presented with highbrow philosophical concepts, fear not. The most engaging part of the discourse is the interplay between these 3 men, the hilarious clashes of ideals and ultimately, their internal glances. With no single philosophy taking hold, the three are forced to put aside the hubris of their public life to face their personal failures.  Kelvin Small’s costumes are starkly effective as they unmistakably reflect the iconic characters.

At some point in our lives, we all ask ourselves these two simple, life-altering questions: “Why are we here?” and “Does God exist?”  We don’t get them answered, but have a heaven of a lot to think about.

The Gospel According to Thomas Jefferson, Charles Dickens and Count Leo Tolstoy: Discord  is playing at Washington Stage Guild from March 31 to April 24, 2016, at 900 Massachusetts Ave NW Washington, DC  20001. For information or tickets to this or upcoming shows, call (240) 582-0050 or online.