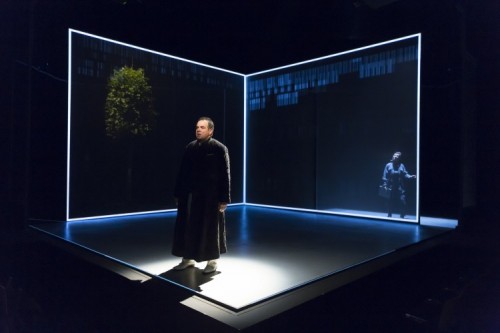 Playwright Jennifer Haley’s The Nether is set in 2050 when Earth is a dystopian wasteland and humanity seeks refuge in the Nether, an interactive wonderland where anything and everything is possible. Some people spend the majority of their lives in the Nether, acting out their darkest fantasies in virtual anonymity.

Detective Morris (Gabriela Fernandez-Coffey) investigates a popular world within the Nether, aptly dubbed the Hideaway. Lovingly curated by a man known affectionately by his virtual “children” and guests as Papa (Edward Gero), the Hideaway is a stylistically immaculate haven for nostalgic pedophiles. It’s all very creepy. Papa maintains that verified adults are the users behind all of his “children.” With their consent, the “children” interact with guests of the Hideaway. Does this knowledge make the Hideaway any less perverted?

Papa’s “daughter,” Iris (Maya Brettell), lightheartedly trips across the stage. There is no comfort in Brettell’s flawlessly childlike portrayal of a 9 year-old girl. Although there are no overt sexual encounters, Haley’s script and Brettell’s unapologetic performance supply ample fodder for the imagination. Is it any comfort to know that the actress is an adult?

The entire cast of The Nether is flawless. Joining Gero, Brettell and Fernandez-Coffey onstage are Tim Getman as Mr. Woodnut and Paul Vincent O’Connor as Mr. Doyle.

Woolly Mammoth has never been shy about deconstructing their audience space in the name of innovative stage construction and The Nether is no exception. The stage juts out disconcertingly into the audience. Moveable walls and vivid Matrix-esque light projections are employed alongside whimsical Victorian-era props. The Nether’s landscape is unpredictable, futuristic and intimidating. I could never accuse Woolly Mammoth of cutting corners or being boring.

The Nether has no hero, mountains of character development and plot twists, but no hero. Haley introduces a never-ending sequence of cringe-worthy questions without answers. The lack of a hero is disconcerting and the unfamiliar landscape left me feeling disconnected from the tragedy at the heart of The Nether. Fundamentally unsettling, The Nether nonetheless flies by in a series of snappy, succinct scenes.