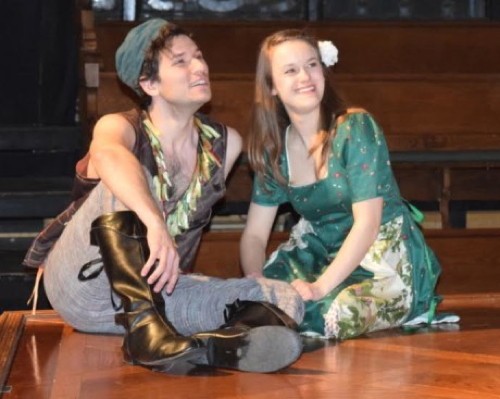 In the 400 years since Shakespeare’s death, it’s easy to see why so many theatre companies try to do something new with his plays–whether it’s updating the language, changing the time period, or adding puppets. Companies want their shows to stand out among the rest. Baltimore Shakespeare Factory (BSF), however, does something old, and to great success!

BSF is committed to performing one show a season in Original Pronunciation (OP), the way Shakespeare’s audiences would have heard his plays. In this season’s OP production, BSF performs The Winter’s Tale in the beautiful Great Hall at St. Mary’s Church in Hampden.

…The Winter’s Tale at Baltimore Shakespeare Factory is well worth your while.

I’ll admit, I was worried I wouldn’t be able to understand a word of it. After all, Shakespeare wrote in Old English, practically another language, right? Wrong. In an entertaining pre-show information session, three actors explain a few of these misconceptions and fill us in on why their company chooses to perform in Original Pronunciation. They even demonstrate what Old, Middle, and Early Modern English sounded like (the latter being Shakespeare’s English). OP, then, is the way this Early Modern English was pronounced. I was surprised to find that OP actually heightened Shakespeare’s language and made it sound more natural. The cast’s careful handling of this pronunciation, along with natural lighting and lovely costumes, transport you back to a 17th century production of The Winter’s Tale.

In keeping with the philosophy of re-creating Elizabethan theatre conditions, BSF intersperses The Winter’s Tale with music. Modern music. The play opens with the Cat Steven’s song, “Wild World,” sung beautifully by actor Brendan Edward Kennedy. Though the music is relevant to the plot and characters, it would have been interesting to hear some of the music Shakespeare may have used. This is, after all, a chance to hear how performances would have sounded. In any case, the cast showcases their many talents, with members switching instruments and singing renditions of “Behind Blue Eyes” and “Here Comes the Sun.” Kennedy (Florizel, Servant 1) and Kathryn Zoerb (Perdita, Mamillius, Dion, Emilia) open the second half of the show with a particularly charming duet.

The first half of The Winter’s Tale introduces us to Leontes, King of Sicilia, who seems to be blessed with a lovely bunch of family and friends. BSF has done an excellent job in casting this talented ensemble. Actors switch seamlessly between two, three, and even four roles, and many women play men. Chris Cotterman is fantastic as the tortured soul, Leontes. We sympathize with him as his emotions shift between jealousy and compassion. Director James Keegan brings the stage to life by allowing scenes to play out simultaneously. True to an Elizabethan/Jacobean performance, actors play in the aisle, and speak directly to the audience, encouraging us to get involved.

Events in Sicilia turn ugly when Leontes accuses his wife, Hermione (Valerie Dowdle), of having an affair with his good friend Polixenes, (Terry O’Hara), and bearing Polixenes’ child. Valerie Dowdle plays Hermione, and shows a real mastery of Original Pronunciation, gliding through highs and lows of intonation with ease. Leontes throws Hermione in jail, where she gives birth to a daughter. The stoic Paulina, played with grace by Marianne Gazzola Angelella, brings Hermione’s newborn to Leontes in a failed attempt to win his sympathy and forgiveness.

During Hermione’s trial, word comes to the court that Leontes’ and Hermione’s son, Mamillius (Kathryn Zoerb), has died. Suffering from grief, Hermione dies and leaves Leontes heartbroken. Hermione’s friend, Antigonus (the buoyant David Forrer), takes her newborn daughter to the shores of Bohemia, to be rescued and raised by a Shepherd (Craig Allen) and his son, known as Clown (Rena Marie). In my favorite Shakespearean stage direction, Antigonus is chased off the stage by a bear (a well-crafted interpretation and design by Zac Lawhon).

The second half of The Winter’s Tale is so different in tone and energy from the first, it could almost be another play. In Bohemia, shepherds and villagers play music and dance. There’s a lover’s quarrel between two shepherdesses (Valerie Dowdle and Shira Concool) and Clown. Props must be given to the ladies playing men, who are the most fun to watch. Rena Marie as the spirited Clown and Jess Behar as the thieving Autolicus are especially skilled physical actors. Brendan Edward Kennedy (Florizel) and Kathryn Zoerb (Perdita) give strong performances as helpless lovers. Terry O’Hara is a powerful presence as Polixenes, especially when reprimanding his son, Florizel, for his attempted marriage to Perdita.

April Forrer’s costumes shine, especially those of Bohemia. Most outstanding are Perdita’s many floral dresses, Clown’s magical boots, Florizel’s vest, Autolicus’ voluminous cape, and the beautiful white, gold, and purple costumes of Sicilia. Music Directors Jamie Horrell and Jim Stimson create mood with an ominous drum beat in the balcony, and later a lute that lends a romantic feel to the performance.

The cast’s command of OP and the production staff’s whimsical creations whisk you back in time to kingdoms where storms rage, lovers dance in fields, and statues come to life. If you want to see Shakespeare in a new (and old) light, The Winter’s Tale at Baltimore Shakespeare Factory is well worth your while.

Running Time: Two and a half hours, with intermission.