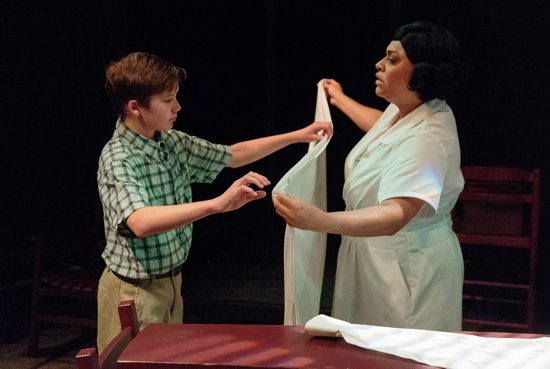 The Creative Cauldron has brought Broadway to the humble town of Falls Church Virginia in their incredible production of Caroline, or Change. Matt Conner directs a cast and crew of absolutely inspired theatre artists. With a book and lyrics by Tony Kushner, of Angels in America fame, and music by Jeanine Tesori, Fun Home, this musical is a tour de force.

The story revolves around African-American maid, Caroline Thibodeaux, who struggles to make ends meet after divorcing her husband, and Noah Gellman, the son of her employers, who decides that he is going to start leaving his pocket change in his pants for Caroline to find after his mother decides that she gets to keep any money that she finds in the laundry. The play deals with race, religion, prejudice and grief in a way that few other plays dare to do, simply and truthfully.

Bottom line: This show is an absolute must-see that hits every possible mark: aesthetic and artistic.

Iyona Blake is the Prospero who conjures the eponymous Caroline, a tempest of a character. When she is on stage, you feel like you’re there in the 1960s in the only basement in Louisiana.  It’s hard to pick a favorite out of her array of powerhouse performances, but her penultimate musical number “Lot’s Wife” is the most truthful and raw moment in the play, a true privilege to watch. “Gonna Pass Me A Law”

Noah Gellman is played by DC area actor Ethan VanSlyke. VanSlyke is wise beyond his years, and handles the complexity of the character with the skill of an actor three times his age. His songs “Noah Down the Stairs” and “The Cigarette” are masterfully acted.

Tiara Whaley is absolutely magical as the “shiftless” fourteen-year-old daughter of Caroline, Emmie Thibodeaux. One of many flawless number s in this nearly perfect production is “Roosevelt Petrucius Coleslaw.” In this upbeat schoolyard romp, the children of the play take center stage, explaining their opposing relationships with money. It is pure childish joy. Jeremiah Hasty and Arianna Vargas, who play Emmie’s little brothers Jackie and Joe, respectively, shine in this number as well.

Ashley K. Nicholas is Dotty Moffet, a fellow maid and foil to Caroline. She is exceptionally truthful in “That Can’t Be” and “Sunday Morning.”

Rose Gellman/Stopnick, the aspiring quintessential sixties housewife, is played by Creative Cauldron veteran Carli Smith. She serves as the It would be easy to make this role into a reflection of June Cleaver, but Smith rounds the character out into a complex and deeply flawed human being, which is evident in her interior pieces throughout, especially “Long Distance” and “Rose Recovers”

Something that this play does different that works extremely well is the anthropomorphizing of domestic and symbolic inanimate objects. Awa Sal Secka plays The Moon/ the Washing Machine and every time she sings it is befitting of a supernatural being like the Moon. Malcolm Lee as the Electric Dryer/the Bus, two characters that represent Caroline’s relationship with men. Like Smith, Malcolm serves as the comic relief in the play, his song “The Dryer” is sidesplitting, but also as a character that lends gravity in “The Bus.” The Radio is played by a trio of fabulous singers, Kara Tameika Watkins, DeAndriea Norman, Tiffany Byrd that serves as a kind of Greek chorus. Their bluesy “Salty Teardrops” is especially riveting.

Other notable performances include Harv Lester as Stuart Gellman, Noah’s estranged father, whose part culminates in the heartbreaking and beautiful “There is No God, Noah;” Robert John Biederrman and Jane Petkofsky, as Stuart’s parents and grandparents serve a similar purpose as the animate inanimate objects; playwright and actor Joe Palka plays Noah’s Grandfather Stopnick whose “A Twenty Dollar Bill and Why” is hilarious.

The play is mostly sung through, and the Creative Cauldron has gathered together some of the greatest vocal talent in the DC area. Walter “Bobby” McCoy, serves as music director and pianist for the show.  If for some reason you still don’t want to see the show after I’ve explained everything else, go for the music. Go for the chance to hear the lovely cadences of Secka’s Moon in “Moon Change” or the feisty Ronette style numbers of the Radio.

Margie Jervis pulled double duty as the set and costume designer. The set design was simple, but innovative, allowing the characters to negotiate with the different set elements to create the Gellman’s home and Caroline’s home. Her costumes, by contrast, are complex and were straight out of the swinging sixties with fitted, sharp cuts, and flattering lines.  Everything from Caroline’s stark white uniform to the red sequins of the Radio, from the Gellman’s every day outfits to the fantastical elements of the inanimate objects is so purposeful and well done.

Lighting designer Lynn Joslin played with color, which contrasted well against the mostly black set, with gobos to denote trees and windows. The colorful and playful design for “Roosevelt Petrucius Coleslaw” was especially well done.

Bottom line: This show is an absolute must-see that hits every possible mark: aesthetic and artistic.  This is a story that must be told, and a production that has to be experienced. So please, go experience it!