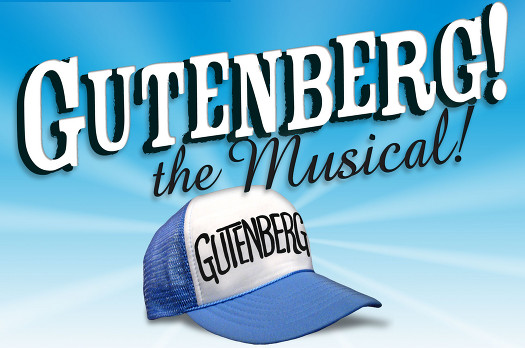 “Ok! Here we go!  Welcome to Gutenberg! The Musical!” Meet Doug Simon and Bud Davenport, the authors and stars of this audition for big Broadway Producers in NYC!  In this two-man musical spoof, a pair of aspiring playwrights perform a backers’ audition for their new project – a big, splashy musical about printing press inventor Johann Gutenberg.  With an unending supply of enthusiasm, Bud and Doug sing all the songs and play all the parts in their crass historical epic, with the hope that one of the producers in attendance will give them a Broadway contract – fulfilling their ill-advised dreams.

Now, you’re probably sitting there and thinking to yourself, “OK, so it’s their second show, but what am I going to see?” Well… here’s the plot!  The play is performed as a backer’s audition by Bud Davenport and Doug Simon, the authors of a musical about Johannes Gutenberg, which they are pitching to producers who might put their show up on Broadway. Because the minimally-talented and starry-eyed authors don’t have a cast or an orchestra, Bud and Doug play all of the roles themselves, wearing hats with the characters’ names on them and frequently switching said hats to indicate different characters. Minimal props, such as a cardboard box, pencils, and a chair, are used as well.

Since Bud and Doug’s research into the life of Gutenberg (aka a quick Google search) revealed that information on his life is “scant”, they take a historical fiction approach, by which they mean that they just made stuff up.

In the play-within-a-play, Johann Gutenberg is a wine presser in the medieval German town of Schlimmer, a happy and cheery place except for the fact that the town is horribly dirty and depressing and no one except Gutenberg can read. Intent on saving the townspeople from their own ignorance, Gutenberg turns his wine press into a printing press (he accomplishes this in one night). His beautiful (but dim) assistant Helvetica is in love with him, but Gutenberg is unaware of her feelings. Meanwhile, the show’s villain, Monk, an evil monk who worships Satan, attempts to keep ignorance alive so he can control the townspeople through inaccurate readings of the bible and seeks to destroy the printing press. The inept show-within-a-show parodies various musical theater conventions, such as the cheery opening number, a high-octane rock song for the act one finale, kick lines, emotional ballads and an irrelevant “charm song” about biscuits sung by two supporting characters.

Despite their ineptitude, Bud and Doug’s high-energy and optimistic performance of their show may be enough to launch their dreams of stardom.

But I’ve never heard of Gutenberg! The Musical… is it a good show?  Here’s what New York publications said!

“There are lots of genuine LAUGHS in GUTENBERG!” –New York Post

Justin Calhoun (Bud Davenport) is thrilled to be a part of this production! He is a proud graduate of James Madison University with a BA in Musical Theater. Some recent credits include: Forever Plaid (Sparky), Into the Woods (Rapunzel’s Prince), and Ragtime (Willie Conklin). Sending love to his family and friends!

David C Jennings (Doug Simon) is co-founder of Epic Productions Inc.  Director/Choreo credit include I Love You, You’re Perfect, Now Change at Ciao Bella Restaurant, Pirates of Penzance at Park School.  Acting credits include Lancelot in Spamalot (2015 HH Award Winner), Pirate King in Pirates of Penzance, Chad in All Shook Up, and Gaston in Beauty and the Beast.

Join us May 20 – 29th at St. Mark’s on the Hill, 1620 Reisterstown Rd, Pikesville MD 21208.  Fridays and Saturdays the show begins at 8pm.  Sundays the show starts at 3pm.  Tickets are $25 General Admission, $20 for Children Under 12 and Seniors.  Running time: 90 mins.  Tickets available in advance through EPICSTAGE.ORG, or you can get them at the door!

Epic Productions has great plans for a future in Pikesville!  Come help them kick it all off with this hilarious musical comedy.