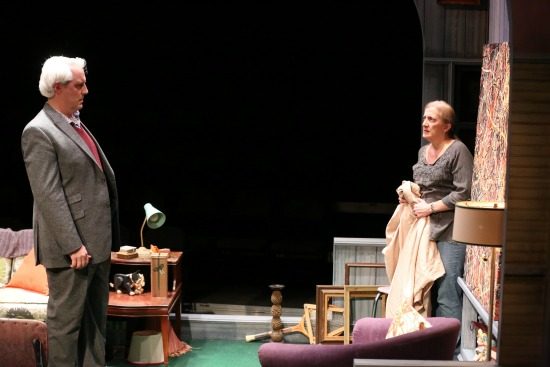 Set in a present day trailer park, Bakersfield Mist by Stephen Sachs reveals the tensions between the sophisticated upper class and seemingly uneducated hillbillies. Maude Gutman (Donna Migliaccio) a long-time resident of Bakersfield Park, has what she and others believe to be a previously unknown Jackson Pollock painting. Enter Lionel Percy (Michael Russotto), art connoisseur and Jackson Pollock expert. He has been sent from New York to inspect the painting and determine its authenticity. The two characters clash the minute they meet.

On first impression, Maude is a cynical woman who collects the junk others have thrown out; and Lionel is a condescending man who will not hear anyone else’s opinion. But it does not take long for both to prove that first impressions can be completely unreliable. As the action unfolds, the audience learns pieces of the past that enlighten the current situation.

Migliaccio expertly expresses the desperation of Maude’s circumstances while coming up against the formidable force that is Russotto as Lionel. He thwarts her at every turn and feeds off her energy to fuel his passion for art and authenticity. The play brings up the questions of what is authentic and what is art’s purpose. Migliaccio and Russotto provide answers from their perspectives and leave the audience pondering their own answers.

Director John Vreeke takes the audience deep into the psychology of the characters, shedding light on their pasts and how they still affect the present. Costume Designer Seth M. Gilbert helped to develop the characters through his choices. The costumes are appropriate and well-chosen, but were not a highlight and nor do they need to be. Lighting Designer Colin K. Bills makes the audience feel as though they are standing directly outside Maude’s home and just peeking through the windows.

The set is a pink trailer that splits the audience in two sections. Most of the walls of the trailer have been cut away in order for the audience to see inside. It is full of knick-knacks and collectibles straight from the thrift stores Maude frequents. Scenic Designer Daniel Ettinger magnificently creates Maude’s world and draws in the audience to her home and her mind. Sound Designer Christopher Baine rises to the challenge of an almost theatre-in-the-round. The modest music and effects are not overwhelming but heighten the reality the audience enters into.

Advisory: Suggested for ages 13 and older for strong language and sexual references.

Maryland native who loves theatre and the written word.