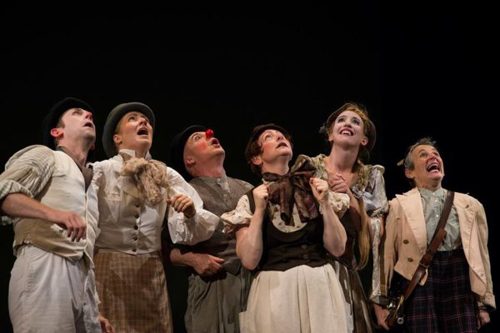 In a show that was part of last year’s Capital Fringe, D.C.’s brilliant Happenstance Theater, is again gracing the stage at Baltimore Theatre Project. Unlike their previous productions, the company has gone back to basics with virtually no set except a concave back wall, painted in a muted, rusty gold, and effectively utilizing the talents of lighting designer Kevin Boyce.

It is always a sheer pleasure to watch this group of actors perform.

A collaborative effort, each actor has only one character, one costume (Edwardian-influenced and again beautifully designed by Artistic Co-Director Sabrina Mandell), and one suitcase. The cast, however, comes with an abundance of talent rooted in physical comedy, pantomime and just plain clowning around.

Is this the end or isn’t it? Happenstance cites inspiration from “images of refugees fleeing on foot, Edwardian workers,” films like “La Strada and The Seventh Seal, and the existential comedy of Samuel Beckett.” The end of the world is not so tragic in the hands of this very talented troupe. Each actor is a distinct character – the stern and strung-too-tight Edith (Gwen Grastorf); a childlike and flighty Rose (Sabrina Mandell); sweet Pandora (Sarah Olmsted Thomas) who often breaks into brief moments of song; simple but not-so Big Wanda (Karen Hensen, with only a trumpet and accordion instead of her usual multitude of instruments); the often put-upon, Ralph (Mark Jaster, sporting a red clown nose and bowler hat); and the take charge and sometimes literally manipulative Roland (Alex Vernon, a master at pantomime and sound effects).

Many end-of-existence options are played out but everyone bounces back cheerfully to the next possibility – whether it be a flood, a comet, or machine gun fire from a plane – and starts anew. One thousand butterflies fly out of Rose’s stomach and there is a solemn funeral for one butterfly. There are very funny sketches about who gets to the front of the line that is almost a dance routine and complications with hats. Is that ticking sound in the makeup case a bomb? Ralph bravely confronts it with hilarious sound effects from the rest of the cast as he steps on the wrong spot – verbal land mines, if you will.

There is plenty of audience interaction (although the audience was uncharacteristically small this performance). The characters ask what kind of drink you would like served up from the Apocalypse Bar (and deliver it) but also pose a more profound question – what is the one thing you want to do if the world was ending that night? These characters choose to approach the possibility of the end with humor and fun.

If you are not well versed in the existential influences (or find them esoteric), it doesn’t matter. It is always a sheer pleasure to watch this group of actors perform. Thank goodness Theatre Project consistently brings the company here to the Baltimore area to share their magical and thoughtful productions.