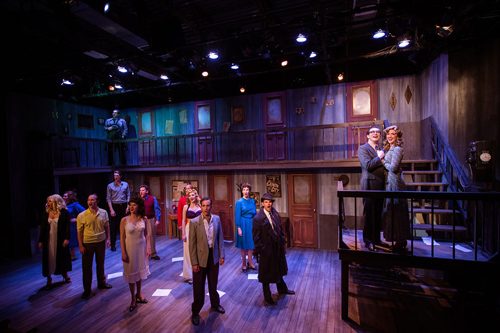 City of Angels won six Tonys including Best Musical, Best Book of a Musical by M*A*S*H creator/writer Larry Gelbart and Best Original Score by the legendary Cy Coleman (Sweet Charity, On The Twentieth Century, Barnum, The Will Rogers Follies) with lyrics by David Zippel. Despite all of its accolades and pedigree, this brilliant comic homage to the film noir movie classics of the 1940s (and Hollywood’s legendary treatment of writers) is rarely produced. A road trip was in order from Baltimore to a hidden gem in a former industrial warehouse in Herndon, VA.

… a rare treat – ‘City of Angels’ is a snazzy, jazzy  production and definitely worth the trip.

This is the third year of the NextStop Theatre Company’s status as a professional company. It began life as a community theater group known as The Elden Street Players in 1988. This is quite possibly the D.C. area premiere of this show and high praise goes to this small theater for taking on such a structurally and vocally complex musical as City of Angels. With a smart script that crackles and a rich, jazzy score packed with showstoppers, this production requires a strong cast and creative team. NextStop delivers under the direction of Evan Hoffmann. The voices in this company are as good as you will ever hear in musical theater, supported by a small but mighty orchestra under Elisa Rosman’s musical direction.

In this “movie-within-a-musical” (or the “reel” and “real” worlds) the young, timid writer Stine (Bobby Libby, with a powerhouse voice) has gotten his big Hollywood break. He is turning his novel about a hard-boiled gumshoe, Stone (Ryan Burke), into a screenplay. Unfortunately his over-the-top director/producer Buddy Fidler (a tad heavy-handed though funny John Loughney) has an ego the size of the Hollywood sign and keeps asking for changes to the script. There are some clever moments when the actors in Stine’s story rewind themselves as he rewrites the scene.

All the familiar and memorable Hollywood characters of the two worlds are here. With the exception of Stine and Stone, the small cast plays multiple roles and, for the most part, handles them with aplomb. There is plenty of deceit, infidelity and mystery in both worlds to go around and they often mirror each other.

Stine’s character and literary alter ego, Stone, is a composite of world-weary screen detectives in the tradition of Sam Spade and Philip Marlowe. The plot spoofs the Raymond Chandler classics – Murder My Sweet and The Big Sleep with a dash of Double Indemnity. Larry Gelbart’s dialogue and Zippel’s lyrics are masterful, paying homage to the quick wit and racy, double entendres that made these films so memorable in an age of strict production codes.

In the real world, Stine’s wife, Gabby (Katie Keyser) is disillusioned with Hollywood and how it is compromising her husband’s writing. She returns to New York and without her, the loneliness causes Stine to stray into the arms of Buddy’s secretary, Donna. In her dual role as Donna and Stone’s trusty girl Friday, Oolie, Katie McManus is a gem as is Keyser who also plays Bobbi – the love that broke Stone’s heart in another life. McManus manages to pull off both roles in the same scene in “You Can Always Count on Me.” and Keyser handles “With Every Breath I Take” with haunting beauty.

In the world of the screenplay, the sexy Mrs. Alaura Kingsley (Teresa Danskey, who as Buddy’s wife will also play the role of Alaura in the movie) needs a detective to find the missing stepdaughter of her much older husband – and Stone needs the dough. And of course, all is not as it seems. In the hands of Ryan Burke, Stone is no cliché or cartoon. This young actor has the gravitas beyond his years to breath life and depth into this iconic character. He possesses a beautiful baritone and his voiceovers, a staple of film noir detectives, are spot on.

The action is also moved along with a chorus – a quartet of singers known as the Angel City Four (Zac Brightbill, Carolyn Burke, Ward Ferguson and Shaina L. Murphy) who scat and tackle Coleman’s lush jazz harmonies as well as performing smaller roles. There is also the Hispanic police detective, Lt. Munoz who has it in for Stone. He is played by Mark Hidalgo who has a delightful turn in “All Ya Have To Do Is Wait,” along with his “backup dancers” in the form of a couple of officers and the coroner. As the long lost step-daughter, Mallory, Mackenzie Newbury steams it up as a sexy femme fatale and Scott Harrison has fun with his roles as crooner, Jimmy Powers and the daffy Dr. Yamoto.

Not having the space in this black box theater for elaborate sets akin to the Broadway show, Evan Hoffmann and Jack Golden created a two-level set with four doors on the top-level and three on the bottom and descending stairs with a landing – every inch is maximized. Though the actors are a little cramped on the narrow second level, they make it work.

Lighting designer, AnnMarie Castrigno and costume designer, Kristina Martin, are stars on their own, creating the “reel” world of black and white tones, and the “real” world, full of color and brightly lit, sometimes at the same time. Stone and Stine have a show-stopping duet, “You’re Nothing Without Me,” at the end of the first act that not only showcases the voices of the two actors but is a technical marvel to watch as the two worlds coexist.

Thanks to NextStop, theatergoers are given a rare treat – City of Angels is a snazzy, jazzy production and definitely worth the trip.

Advisory: Contains adult content and themes, which may not be suitable for all audiences.