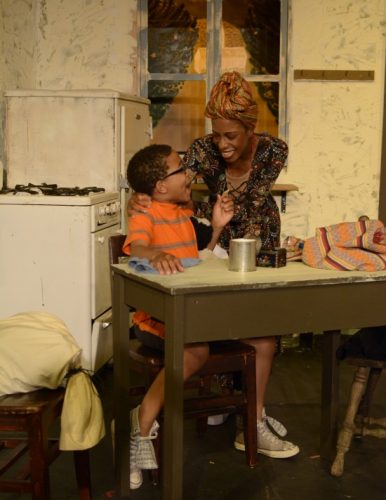 Justice Ervin as Mannetijie and Ivana Alexander as Veronica. Photo by Michael deBlois.

In the early years of the new South Africa, with Apartheid buried away and Nobel laureate Nelson Mandela elected President, there was ample room for optimism and hope for the future.  The great South African Playwright Athol Fugard, whose work had vividly portrayed the injustices of the old system, could be forgiven for giving into the euphoria of Mandela’s years as President. He wrote a domestic drama, Valley Song that introduced audiences to a young singer, Veronica, with dreams of fame and fortune in the big city.  The play, among other things, spoke to the optimism and vision for upward mobility felt by so many young people at that time.

But when Mandela handed the reins of power over to Thabo Mbeki, it became clear that the ANC leadership was corrupt and indifferent to the suffering of South Africa’s poorest and most vulnerable.  Fugard’s response to the disillusionment of the Mbeki years, Coming Home, is a sobering sequel that features Veronica returning to her small farming village, young son in hand.  Her secret – shortly after giving birth to her son, she contracted HIV; she has come home to die and, she hopes, find a step-father to take care of her boy once she is gone.

Eleanore Tapscott has courageously brought Coming Home to Alexandria’s Port City Playhouse, a compelling domestic drama which takes on issues that—although set in today’s South Africa—resonate with our own community.  Michael deBlois’s set is well worth walking through, creating as it does the interior of a humble township shack while evoking the hard-scrabble farm that once belonged to Veronica’s grandfather, Oupa.  The English of South Africa, inflected as it is with the Dutch of the Boers and the patois of native Africans, is complex, and it’s great to see that Charles and Adri Lourens helped the lead performers create the unique dialect that truly brings Fugard’s words to life.

Ivana Alexander exudes charisma as Veronica, who has to struggle to maintain a happy exterior even as she brings her son Mannetijie (theatrical newcomer Justice Alexander Ervin) to a home he clearly can’t stand.  Mack Leamon, meanwhile, gives an endearing performance as Alfred, her hometown flame and the first to discover her dark secret.  The rapport between Alexander and Leamon is endearing, and they navigate the difficult path towards Veronica’s fate with grace.  Art Green makes his theatrical debut as the ghost of Oupa, Veronica’s beloved grandfather, whose house and farm are her inheritance.  Green captures the quiet dignity of a small-town farmer, and his engaging (imagined) dialogue with his grandson Mannetijie brings the show to a touching close.

This is a rare opportunity for neighborhood theatergoers to get acquainted with one of the world theatre’s guiding lights; if there is one thing that might enhance the production, it would be to stage the dialogue in a more naturalistic way.  Fugard, for much of his career, was an openly political writer who never shied away from direct address to the audience; this play, however, benefits from a realistic approach in which the characters address each other instead of the audience, offering us a slice of life in a humble South African home.

Coming Home plays through May 14, 2016, at Port City Playhouse, performing at The Lab at Convergence – 819 North Quaker Lane, in Alexandria, VA. For tickets purchase them online.