Theatre Review: ‘Girl With Diamonds in Her Eyes’ at Pumpkin Theatre 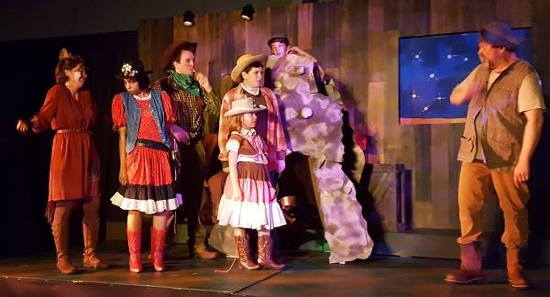 The cast of ‘Girl With Diamonds in Her Eyes.’ Photo provided by Pumpkin Theatre.

Pumpkin Theatre’s production of “Girl With Diamonds in Her Eyes” – with an original score and story by Jason Tinney and Holly Morse-Ellington — will keep the little ones entertained.  The show is accompanied by a harmonica and ukulele (and both are explained before the production begins).

…will keep the little ones entertained.

Buttons McGee (so-called because of the jar of buttons she collected) is an orphan on a mission.  Her goal?  To travel from Baltimore to Nevada to find gold and silver at Broken Tooth Pass.  Along the way, she meets a gang of three who travel around stealing candy.  She also meets Smudge (Steve Sagan), a pan miner, and his (talking) horse, Sally (Rebecca Kenton).  After a long trip, Buttons arrives at the mine at Broken Tooth Pass.  She and Smudge are able to take the gold right out of the mine.  Unfortunately, the head of the candy gang (Reese Bruning) can’t get the gold because she needs to learn to share with others before the mine will share with her.  Well, what would a children’s play be if there wasn’t a lesson involved?

The best part of this play is that the audience is kept involved.  At the beginning, Buttons (Rachel Reckling) asks different audience members, “Can you keep a secret?” and “Do you know how many miles it is from Baltimore to Nevada?”  There are also ghosts running in the aisles at one point; the rumors of the ghosts keep people from coming to Broken Tooth Pass.  And the coyote (Samantha McEwen Deininger) addresses the audience in rhyme, explaining her claim to the mine and that Buttons isn’t really searching for gold and silver… she’s searching for friends (another lesson to the kids thrown into the production).

The stage is small, basically just a backdrop painted like wood with a framed ‘painting’ in the corner (by Heather Mork).  This ‘painting’ is later used to show motion while Buttons is walking from Baltimore to Nevada; it also switches between day and night.   A large stretch of blue fabric held by two of the cast members signifies water.

The costumes (by Kendra Svach Shapanus) are simple and cute.  Buttons wears a red cowgirl outfit my kids loved (although they wondered how she could have such a nice outfit if she was coming from the orphanage).  Smudge looks like your typical pan miner in his ratty trenchcoat, vest and hat.  And Sally wears a simple brown dress with a patch on it (but you can still tell she’s a horse thanks to great makeup and black hooves).  In a children’s production, there’s no need to have over the top costumes or scenery.

Although the songs, set, and costumes are simple – and the lyrics and lessons are somewhat corny for adults — “Girl with Diamonds in Her Eyes” succeeded to keep my kids entertained for 45 minutes.  And really, what more can you ask for?

Running Time: 45 minutes with no intermission.