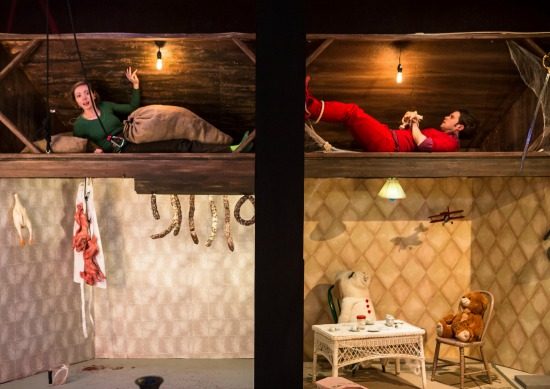 Happy Hour, Spooky Action Theater’s innovative new production in collaboration with the Goethe-Institut Washington, is currently playing at their usual home inside the Universalist National Memorial Church on 16th street. An interactive performance, it blends aspects of live theater with video game aesthetics, narrative and interaction, but don’t be put off, if – like me – participatory theatre makes you slightly nervous, or if – like me – you’re not a ‘gamer’. Happy Hour is extraordinary fun, and a vitally engaging experience, before it is anything else. Originally conceived and performed by Berlin based theatre company machina eX, a collective of media and theatre artists noted for creating immersive experiences, the American production has been adeptly adapted by two of its members Lasse Marburg and Jan Philip Steimel.

There’s a certain comfort to having curtains in a theatre. In dividing the performance space, actors from audience, curtains also demarcate time, a clear start and end to performance. There’s a palpable temporal dimension to Happy Hour created by a simple digital clock counting backwards to zero, but the show also plays with its ‘lack of curtains’, the uncertainty of where performance begins, of who is acting, and when. I was, to begin with, unreasonably suspicious of my fellow audience members, not knowing whether they were just friendly, curious individuals, or if I was being drawn into the script by an undercover actor.

Happy Hour is extraordinary fun, and a vitally engaging experience…

Trust and team work, however, go a long way in Happy Hour. Audience members, divided into two teams, must work together in order to find their way through the piece. The cast in this production have worked with their German counterparts to realise the work, and teamwork is evident in myriad other ways, too. Co-directed by Yves Regenass and Gillian Drake, Co-conceived by Steimel and Marburg, it’s only through an extraordinary team effort that such a detailed experience is realised so elegantly. With Set Design by Kim Sammis, Lighting Design and Tech Consulting by Gordon Nimmo Smith and Sound Design by Mathias Prinz the digital and analog elements come together into a beautifully blended hyperreality. It is, no doubt, a technically complex performance, but the technical and creative team have created such a seamless experience in the theatre, that there seems no trace of this intricacy.

After the game (is the performance still going?), my team’s human avatar, having left his ‘computer screen’ and taken a seat next to us, tells us that the cast rotates with each performance. Last night Carolyn Kashner and Matthew Marcus played their roles as avatars convincingly and endearingly. Able to respond in limited ways to limited instructions from their audience-team, they captured the pleasing, often amusing literal-mindedness of traditional computer game heroes. Stephanie Tomiko was welcoming, at ease, and engaging as our friendly bar-tender – drinks are served during the performance as it is Happy Hour, after all – and Robert Bowen Smith was captivating as the unnerving game-master.

There’s a nice mismatch between the common popular image of gaming – a physically solitary practice – and the way Happy Hour brings complete strangers together in a physical space to engage in the same type of play, if you’ll excuse the pun. Go see it. Go see it twice. It will reward more than one ‘playing’, I suspect.

As I was leaving I heard an enthusiastic audience member say “I really enjoyed that, but is it Theatre?” Absolutely it is. I lost myself in Happy Hour and if the best theatre can take you away from yourself, then that is exactly the experience of Happy Hour. Some of the rules of theatre might be different, but all the better for it. If there is a certain comfort to a curtain, there is an absolute thrill to tearing it down too, and that’s what Happy Hour does. Where does theatre begin and where does it end? Who cares. Go and see this “original adventure” and let Theatre take care of itself. You’ll be pleased you did.