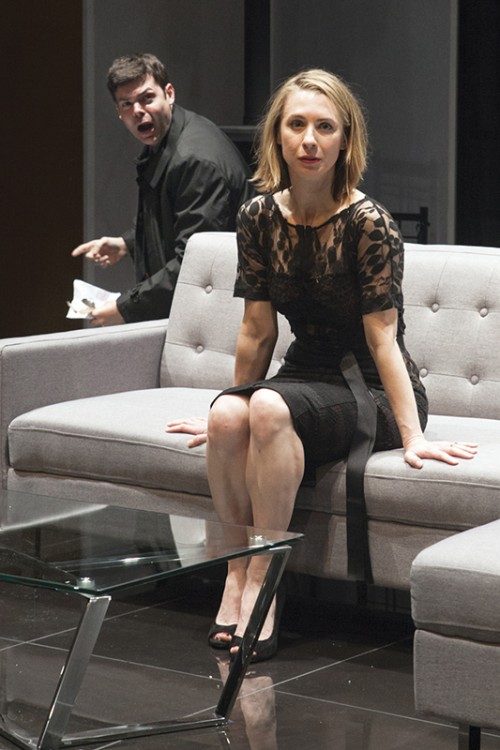 Hedda Gabler (Julia Coffrey) returns from her honeymoon to her “dream” home. Very quickly, it becomes apparent that she is unhappy in every way; unhappy with her husband, Jorge Tesman (Avery Clark); unhappy with her in-law, Julie Tesman (Kimberly Schraf); even unhappy with her timid maid, Berte (Rosemary Regan). Old friends and lovers are subjected to her wrath, her boredom, her vain attempts to take control. She flirts reflexively with family friend Judge Brack (Michael Early) while visits Tesman’s academic rival Ejlert Lovborg (Shane Kenyon) and his lover Thea Elvsted (Kimiye Corwin) push Hedda to the brink. Watch as she self-combusts…and takes everyone down with her.

Hedda Gabler is a bundle of contradictions; she is unpredictable, meddlesome, manipulative and just plain sad. Hedda fights against the labels heaped upon her person by countless friends, family and acquaintances. Hedda is a broken woman, bored and troubled. A well-known dramatic figure, Hedda Gabler enraptures and contradicts. Objectified for over 100 years, everyone really does have his or her own perception of Hedda Gabler. In a way, Hedda is a woman for every woman.

Coffrey’s portrayal of the titular character is multi-dimensional, almost unbearable, and somehow uncompromisingly sympathetic. A bit awkward at the outset, everyone onstage comes alive as they interact with Coffrey’s Hedda. Kenyon’s Lovborg is energetic and divisive, if only he wasn’t rendered a hipster; it’s hard to take a hipster seriously. Clark’s Tesman is likable and Early’s Judge Brack is evil; everyone plays their role aptly as the play swiftly progresses.

Director Matt Torney and Set Designer Luciana Stecconi work in conjunction to subtly highlight Hedda’s gilded cage. Hedda never leaves her home, traveling only as far as her own garden. Costume Designer Murell Horton’s Hedda is attired in a complementary array of sleek, subtly rebellious outfits. Tourney’s actors rove about the stage. Coffrey’s Hedda is acrobatic, almost violent. This clever staging ensures that all two and a half hours of Hedda Gabler flies by.

O’Rowe’s modernized Hedda Gabler is brilliant because it is really no less shocking today than it would have been to Ibsen’s 1891 audience. Not entirely modernized, O’Rowe’s Hedda Gabler retains remnants of 19th century formalities. By masterfully blending past conventions with modernized language, O’Rowe’s audience lives simultaneously in the past and the present. Observing this dichotomy onstage, it is easy to see just how little has really changed. O’Rowe’s modernized Hedda Gabler lends a new layer of complexity to a play that has left generations of theatergoers enraptured, scandalized and stumped.

The last in the Main Series of Studio Theatre’s triumphant 2015-2016 Season, Hedda Gabler is a think-piece, lovingly and carefully crafted for an undoubtedly appreciative audience. That being said, I look forward to seeing a production next year at Studio Theatre whose core theme does not revolve around family conflict, no matter how well-done.