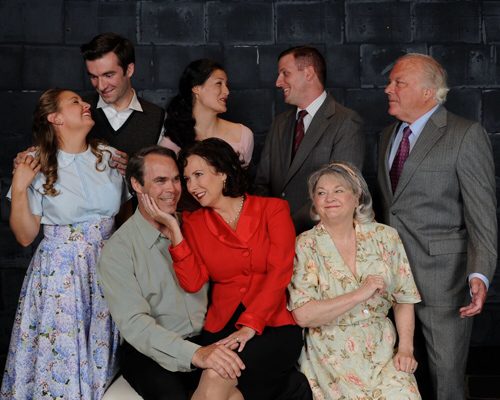 If you are looking for some rollicking good fun at the theater and about theater, look no further than Vagabond Players’ Moon Over Buffalo – a perfect ending to the theater’s centennial season. Also of note is that this is John Desmone’s 100th production and he does a marvelous job of directing his actors in this high energy, madcap comedy.

For an evening full of fun and laughter, Vagabond’s ‘Moon Over Buffalo’ is just the ticket!

Written by Ken Ludwig (Lend Me a Tenor, Crazy for You), the play marked the return of Carol Burnett to Broadway in 1995 after a 30-year absence. She subsequently received one of the play’s two Tony nominations. It was described as a “love letter to live theater,” and indeed it is. Anyone who has ever performed in a play, whether in grade school or on Broadway, can relate to the comic backstage pitfalls and pratfalls that can occur when everything that can go wrong, does.

George and Charlotte Hay (the delightful real life married couple Greg and Michele Guyton) are fading stage actors on the road performing Cyrano de Bergerac and Private Lives in repertory. It is 1953 and they are currently in Buffalo, New York. It is also the dawn of the new medium of television. While George feels that theater is the only place to be a true actor, Charlotte has dreams of being a movie star. (Both made a stab at Hollywood and ended up in a few B films that bombed).

Wearing several hats in the company is Charlotte’s nearly deaf mother, Ethel (Carol Conley Evans in a gem of a performance). She makes no secret of her dislike of her son-in-law and is the cause for much of the hilarity and confusion.

Although all seems well in the Hays relationship, it is soon revealed that George has had a dalliance with the young ingénue of the company, Eileen (Jessica Kim) and she has some unwelcome news. The couple’s lawyer, Richard (a fantastic, completely effortless turn by Richard Manichello), declares his love for Charlotte.

Into the mix is a surprise visit from the Hays’ daughter, Rosalind (the lovely Caroline C. Keibach), who left the theater to lead a normal life. In tow is her slightly geeky TV weatherman fiancé, Howard (a very funny Henry Reisinger, Jr.) who also turns out to be a big fan of her parents. But they are never properly introduced, which causes more comic misunderstandings and mistaken identity. Also Rosalind’s former boyfriend, Paul (Jim Baxter) is the company manager and it is apparent that the spark is still there.

George receives a phone call that could change their fortunes. In need of replacements for his stars (Ronald Coleman who broke both legs and Greer Garson who walked out) in his upcoming film, The Twilight of the Scarlet Pimpernel, acclaimed film director Frank Capra will be attending the matinée. Charlotte thinks George is lying in an effort to make her stay and she leaves with Richard. Distraught, George goes on a bender of epic proportions and the comedy shifts into high gear as the company (including Charlotte who returns when she sees the story in Variety) tries to find and sober up its star to perform in the matinee – but is it Cyrano or Private Lives? To reveal too much would spoil all the fun! Greg Guyton is brilliant as the very drunk George.

The production team does a great job staging the play, from Maurice “Moe” Conn’s detailed, retro 1950s backstage set to the work of Bob Dover’s lighting design. Special note should be made of Robert W. Oppel, the fight choreographer, for his playful duel between the Hays. For an evening full of fun and laughter, Vagabond’s Moon Over Buffalo is just the ticket!