Theatre Review: ‘The Man In The Iron Mask’ at Synetic Theater 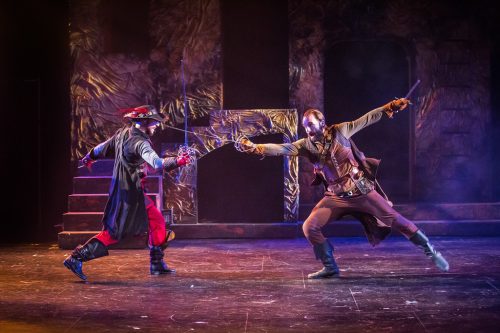 Shu-nan Chu as D’artagnan and Ben Cunis as Athos. Photo by Johnny Shryock.

Chock full of the mind expanding calling cards that are Synetic Theater, The Man In The Iron Mask bursts onstage to give us an altogether immersive experience.  From its beginning as the Musketeers astoundingly reenact galloping horses switching places as they race onward, to the swordplay ballet, this is a literal work of art.

Musketeers, you say? Oh, yes, and unlike the tasty candy confection, there are four of them–true to the classic story, one is added at the end of “The Three Musketeers.”

All for one, and one for all! Get to the theater before there are no tickets at all.

Based on the Alexandre Dumas’ series of tales, Iron Mask is set in 17th Century France and follows the original storyline, but several years later. Our original 18th century X-men, Athos (Ben Cunis), Porthos (Nicklas Aliff), and Aramis (Ryan Sellers) are now retired and off to other pursuits, and D’artangan (Shu-nan Chu) still active, is captain of the Musketeers-the special palace guard, if you will. Beloved King Louis the 13th is dead, and in his place is Louis the 14th, the pompous and grandiose “Sun King.”

Alas France once again is in turmoil, with Louis ruling the land,  completely oblivious of the rest of the world–having to deal with budgets when he would rather have grand parties and canoodle with courtesans.

To arms, men! Well, first, subterfuge. Locked away in a tower is Louis twin brother, masked and half mad in isolation. Synetic veteran Alex Mills plays the pompous and cruel King Louis, and his twin brother Philippe with textured, multi-layered performance. Throw in his harsh treatment of his mother Louise (a fine, brooding Irina Kavsadze) and he exemplifies a spoiled rich king. Philippe does make a remarkable recovery after suddenly being thrust into the world after years of imprisonment behind the “Iron Mask.” But theatre is theatre…it is a frantic B newsreel mixed with ballet.

Taken almost for granted are the subtle shaping of the Musketeers, well-defined personas who have carved out separate lives for each other and must give that up to rejoin the cause. Cunis and Sellers, previous Musketeers, move easily in their roles, all as light as cats on their feet. Cunis provides script adaptation and swordplay along with Vato Tsilurishvili–quite a triple threat. Sellers, as Aramis, a local talent seen recently in West Side Story and Jarry Inside Out, was a study in nuance and Cunis’ acrobatics are unseen on a stage outside of Synetic.

Nicklas Aliff as a portly Porthos, a performer of grand scale added gravitas with a booming voice and unbridled energy to the cause. Quite nimble himself, he blended in well as the unstoppable force of the foursome. Nathan Weinberger’s scheming confidant Colbert was a much needed gasp of hilarity, with pompous pointed wig and oft sounding voice.

Of course, this is a time when a man is measured by his steel, and a blade is a rite of passage. The swordplay, both stylish and scarily realistic, was singularly impressive. All the Musketeers had their own fighting styles—classical (D’artagnan) acrobatic (Athos) counterattacking (Aramis) or stark physicality (Porthos). The use of sword and dagger simultaneously in each hand was an eye opener. In particular, is one battle against the King’s men where instantaneously it was turned into a slow motion time walk, replete with smoke machines. On the edge of camp, and wonderful.

Paata and Irina Tsikurishvili (direction and choreography, respectively) the founders of Synetic, have their regulars back for this show, and it is right up their proverbial lets wow the audience alley. Scenic design was replete with a revolving structure that allowed action to continue to flow. The music, piped in from the front only, was a not so subtle mix of bombast, soaring horns and teasing sequences.

All for one, and one for all! Get to the theater before there are no tickets at all.

Running Time: 2 hours 30 minutes with one intermission after Act II.