Theatre Review: ‘The Merry Death of Robin Hood’ at LiveArtDC 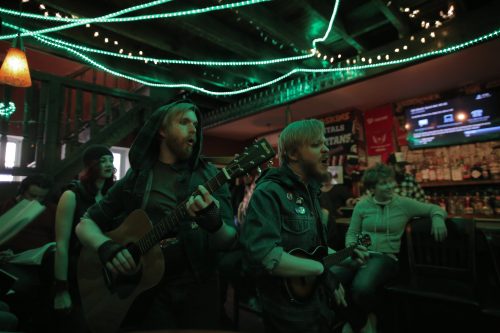 Ceramic plates and pint glasses banged and clanged in the bar above my head. It could have been wildly distracting but nay! I couldn’t look away from the madcap performance mere inches from my face. I was in a bar. Petworth’s DC Reynolds, to be exact. And I was there to see LiveArtDC’s newest production, The Merry Death of Robin Hood, written by Paul Reisman, directed by Jason Schlafstein, the Artistic Director for Flying V Theatre and Director of the 2014 Capital Fringe Festival smash-hit You, Or Whatever I Can Get, and produced by Heather Whitpan, whose list of acclaimed Fringe Festival credits extends a mile long. DC Reynolds is a Capital Fringe Festival venue veteran, probably best known for hosting Three Day Hangover’s wildly popular R+J: Star-Cross’d Death Match at the 2014 Capital Fringe Festival. If there was anyone who could manage a full-length, action-packed, successful theater experience in a small bar it’s LiveArtDC and DC Reynolds; the proverbial dream team.

The Merry Death of Robin Hood is the tale of how Robin Hood (Matthew Aldwin McGee) met his Merry Men, Wilhelmina “Will” Scarlet (Emma Lou Hebert), Friar Tuck (Steve N Bradford), Much (Jon Jon Johnson), Maid Marian (Kaitlin Kemp), Little John (Christian Sulllivan) and Alan Adale (Seth Rosenke) and foiled the divisive plots of that legendarily tax-collector, the Sheriff of Nottingham (John Stange) and his lackey, Sir Guy of Gisbourne (Josh Adams). The Sheriff’s servant Steve Steve (Jon Jon Johnson) is often caught in the crosshairs. Prior to the performance the actors mingled with the audience. Surly and standoffish, Robin Hood’s Merry Men are kitted out as British punks; a little mod, a little garage and a little horror. Their sadness is apparent and justified, for we begin at Robin Hood’s funeral. The play hurdles back and forth through time. McGee’s dead Robin Hood is our narrator and our best source of constancy as the play progresses.

The audience plays a crucial role throughout The Merry Death of Robin Hood. I was so happy because it was exactly the theatre experience in a bar that I longed for. We drank to the tune of “oo-de-lally” and sang along whenever Rosenke’s pensively charming Alan Adale strummed his ukulele and actors regularly seized chairs from audience members citing “right of imminent domain.” If you’ve been craving an opportunity to participate in a theater production, well come on down. Part of the reason that The Merry Death of Robin Hood works so well is that the actors never pretend to be anywhere but where they are: a bar. Actors cleared tables, walked along the bar, refereed drinking contests and awarded celebratory pints for deeds of honor. It’s a lot of fun. Relying heavily on pantomime and improvisation and drawing from a wealth of experience working in challenging environments, the cast of The Merry Death of Robin Hood excelled in a challenging environment.

McGee’s Robin, Hebert’s Will Scarlet and Kemp’s Marian are a convincing love triangle but McGee and Hebert have particularly strong chemistry. Hebert was the closest cast member to me throughout the entire production and I was impressed by her commitment to her insecure, yet bull-headed character. Adams’ Sir Guy of Gisbourne is exceptionally well-developed and excels when he could so easily shrink from the lights.

Fight Choreographer Jonathan Ezra Rubin deserves recognition for the numerous, realistic and oh-so-close-up fight scenes. Stage Manager Katherine Offutt was nothing short of saint for those who were teetering on the edge of obtaining a seat as she whisked around pre-show ably responding to all requests big or small. Reisman’s script is peppered with British idioms and he bravely inserts retro-modern jargon into the very mouth of a revered English legend. Luckily, we were not forced to suffer though any truly horrible English accents.

The Merry Death of Robin Hood is an emotional rollercoaster and by no means a shallow comedic romp through Sherwood Forest. The characters are intricate, empathetic and relatable. Throughout the play I periodically watched the bartenders. They were always watching the play unfold and that’s a wonderful way to test the mettle of a production. The bartenders have seen it before (I presume) and they want to see it again. I kind of do too!

So here’s the deal. It’s a bar so it’s essentially a theatre-in-the-round experience. Get there early or you’ll be standing for almost two hours. If that’s not possible wear comfortable shoes. It’s uncomfortable but not unbearable and totally worth it. Even if you find a chair you may be asked to move, actively participate or be the butt of a silly, silly joke. Buy your tickets now, you don’t want to “look back and say, could have been me.”