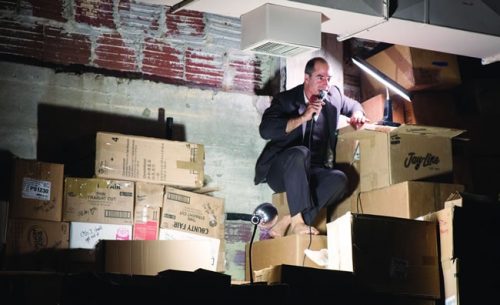 Geoff Sobelle’s The Object Lesson is at once of the strangest and yet most heartwarming pieces of theatre I have ever seen. Directed by David Neumann, the show is vivid, imaginative, funny, and slightly uncomfortable. It manages to explore not only human nature and the stories we all carry, but the boundaries of theater as well.

The Object Lesson is essentially a one man show performed by Sobelle himself that mixes a measure of audience participation into the performance for some slightly unpredictable additional characters. It is the story of one slightly eccentric man who collects…everything…but especially, stories.

Walking into the black box of Studio 4 is an experience itself. Tickets are all general admission, and you literally have to “find a seat.” No, really. The room is staged as a warehouse, with an installation of boxes of stuff which audience members are encouraged to explore in addition to finding a “seat” to pull out and claim. Designed by Steven Dufala, the installation-meets-stage made me feel like Aladdin in the Cave of Wonders. Boxes of old files and letters, of the complete Harry Potter series, a sweet little cap gun, some questionable substances, and much, much more are stashed everywhere. You can even take pictures of it all! It is hard to know where to pull your seat up to without a traditional stage or any indicators, but not to worry; Geoff utilizes the whole studio space and you soon discover the boxes are one part of the installation; you are the other.

Lighting design by Christopher Kuhl was pretty perfect. In fact, you spend a significant amount of time sitting entirely in the dark, with not even Sobelle in a spotlight. Certainly enough time to consider the possibility of an apocalyptic event occurring and realizing you are trapped in a room with a bunch of zombies and a slowly changing traffic light (another slightly surreal aspect of the show).

But the room full of strangers (or zombies) slowly transforms as the show moves forward and the audience realizes no seat is safe from being made part of the show. Anyone may suddenly find themselves holding a box, acting a part, reading into a mic the contents of their pockets or purse, making like Lumiere and holding a chandelier, or being brought out of memory and into the show as the character’s ex-girlfriend.

In fact, at one point in the show, the finding of an old loaf of bread in one box and a slightly chilled bottle of wine in another box resulted in a practically communal effect as the two (and later on some goat cheese, as well) were passed around and around the room and slowly consumed by audience members who didn’t mind a shared snack or swigging down a bottle shared with everyone else.

But more magical than even the installation itself were the stories that Sobelle literally pulled from the boxes. It reminded me a lot of going through my own boxes of memories crated and carried across four continents, except I have never had an audience to hold captive. He would pull a mundane object out, start telling a story, and part way through the telling of it, the story transitioned into actually unfolding. Like the story of the girlfriend, who then gets pulled out of the audience and we watch the story unfold.

All of the acting is done with a certain pizzazz–it is not tedious or weighty “let me tell you a story.” It is magical, comedic, and even involves peanuts (the packing kind) falling like snow or dancing in ice skates like Gene Kelly impressing a girl. Illusion plays nearly a character itself, when you watch him talk out loud, alone, and later on, talk with himself in the same words but now as a completely new conversation. Or the fact that he can pull a whole life out of an empty box. Seriously. He put the box together and then it became a Mary Poppins bag.

The Object Lesson might be uncomfortable if you have a fear of being in enclosed spaces or dread of being roped into a show’s antics (there is no escaping that, I’m afraid). It may also be physically uncomfortable for sitting on backless boxes for nearly two hours and possibly being amongst those who are forced to relocate at points throughout the show. If you have any physical needs, it would be wise to consult with an usher before the show. But it is truly a beautifully evocative, deeply compelling experience, and one I certainly will never forget.