Theatre Review: ‘The Plough and the Stars’ at Eisenhower Theater at The Kennedy Center for Performing Arts 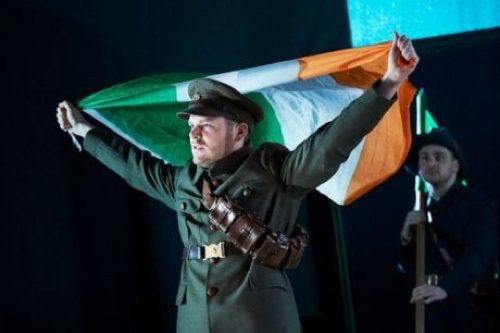 Just when you thought the Irish were going to get all ‘Danny Boy’ on us with the Centenary of the Easter Rising, that ill-fated but auspicious attempt to occupy the General Post Office in downtown Dublin in late March 1916, along comes the Abbey Theatre to take it down a peg. Truth be known, this is something the Abbey has been up to for quite some time. And they do it with a fervor that reminds us of the complex history of the Republic, its troubled emergence into the world of nations, and the load of unfinished business that is Ireland today.

Sean O’Casey’s The Plough and the Stars, first staged a decade after the Rising, famously undercut the patriotic myth-making of the Republic’s early years. It caused a riot with his sympathetic portrayal of the working poor and his unflinching display of the impact the Rising had on those who could least withstand its brutality. O’Casey reminds us that the ‘patriot game’ is as unforgiving as it is alluring.

…the cast does a superb job…

The play offended the elites at its birth and any production today, to be faithful to O’Casey’s spirit, would need to retain an edge that would leave well-heeled customers (the Kennedy Center crowd, for example) a bit uneasy. And director Sean Holmes heightens the squirm factor from the very start; a nervous young girl, standing in front of the fire curtain and blinded by a spotlight, sings the National Anthem before coughing up blood; this, we learn later, is Mollser, a consumptive girl destined to die young from the filth and lack of medical care endemic to the slums of Dublin (or any other modern-day city for that matter). Then the curtain raises, and we are met with Jon Bauser’s bare set; so bare, in fact that the humble Clitheroe apartment doesn’t even have a door; instead we have a piece of bare chunkboard, fresh off the rack from Home Depot, gamely fitted out by local handyman Fluther Good (the amiable, charismatic David Ganly) with a negligible sliding bolt.

O’Casey’s script is chaotic by turns, but there’s method in it; his writing also invites the actors to address the audience directly—a classic Music Hall turn, and a technique made famous by the later German director Bertolt Brecht. There is realism of a gritty sort in the dialogue and the situations of the characters, drawn as they are from O’Casey’s many years as a humble laborer. But his purpose goes beyond simply telling a good story, and Holmes wisely encourages the cast to break us out of our narrative slumber to think critically about what is happening onstage.

Into this bleak world enters Nora Clitheroe—the radiant, passionate Kate Stanley Brennan—who alone among her neighbors dreams of a better life, and longs for her husband Jack (Ian-Lloyd Anderson, in a solid turn) whose attentions are tragically drawn by the revolt, and by the blood brotherhood of military life. She is joined by neighbors Bessie Burgess, profoundly alcoholic and worried sick for her son who has gone off to fight on the British side in World War I. As Burgess, Eileen Walsh is not above giving us the comic-drunk comedienne, with just a touch of Carol Burnett to keep her in our good graces. But Burgess’ character grows to epic and tragic proportions by the end of the play, and it is in the last act that Walsh (along with Brennan) rips your heart out for a good roasting.

O’Casey’s stroke of genius is to put the Rising in the background, always off-stage somewhere; instead he foregrounds the people caught up in its violence. The first two acts take place months before, and we meet a sizeable cast of local characters, a few of whom strike up an interest in rebellion, but not always what you’d expect. In the case of The Young Covey, for example, it’s a Marxist proletarian revolt against the bourgeoisie he’d be having. As Covey, Ciarán O’Brien lights up the stage with a character drawn somewhat sympathetically by O’Casey (himself a man of the left); fortunately for us, O’Casey also knows the folly of intellectualism among the working poor, and he’s fully aware of Covey’s irrelevance to the real action.

Covey’s a brawler, but also an intellectual snob who cheerfully mixes it up with anyone who dares prefer nationalism (that bourgeois plot) to his labor activism. The barroom in Act 2, where a brawl or two nearly occurs, is firmly set in the present day; in the original script, the rally for the Rising is held directly outside, and the brave patriotic slogans of Patrick Pearse come through the window; for this production, the rally is far off but, thanks to the wonders of cable TV, only a remote’s click away. The patrons listen only somewhat attentively as they sip their Harps and whiskeys from plastic cups, which are soon liberally strewn around the floor.

In Acts 3 and 4, the scene shifts to the time of the Rising, and a brutal sequence it is; the humble tenement is now a shambles, as implied by the massive steel structure’s carefully-choreographed tumble to the floor. Nora pleads unsuccessfully for Jack to abandon his comrades-at-arms. Brennan’s ferocity here is searing and unforgettable, and renders her abandonment and miscarriage (she has gotten pregnant in the interim) of far greater import than the patriot games played around the General Post Office with Pearse & Co. Even the sight of a badly wounded soldier in need of medical help leaves Nora un-phased, creating a tableau that has an element of the macabre and here is played for pathos. (In other hands, it would be an opportunity for satire and placing the Rising in perspective; director Holmes will have none of that sort of humor, not that there isn’t any here).

The final moments may seem odd – a sort of coda, with British soldiers; but it’s a reflection of the fact that the Rising itself was a failure, and the city of Dublin shelled beyond endurance. In the end it wasn’t Irish forces that won the day, so much as it was British cruelty and indifference that inspired the final push for independence.

Writing as I am when the production has already moved on, I can only wish it well; the cast does a superb job, and this Plough is briskly paced for a full-length drama.

Running Time: 2 ½ hours, with one intermission.

Performances for the Ireland 100 Festival take place through May 17-June 5 at the Kennedy Center in Washington, D.C. For tickets and more information, click here.