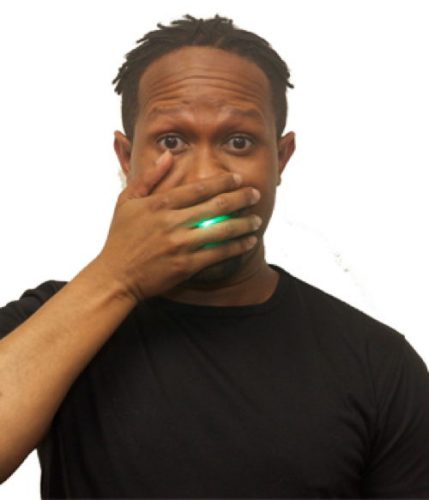 There are plays that move us, and shake us, and inspire us to act, but then there are those that inspire us to be true to ourselves and use our own voice. Voices the play written and produced by local playwright Ebony Rosemond, achieves the latter objective, and calls on the audience to shout in order to completely find and understand yourself.

The play revolves around the stories, both literal and figurative, of the four main characters: Berdette, Sam, Joseph, and Shirley, and their decisions to stop talking. Through a number of vignettes and scenes we see their different reasoning behind this decision that they have all reached separately but that they must now come to understand together. Directed by Jared Shamberger, who most recently worked on the production “Lady Day at Emerson’s Bar and Grill,” the play is truthful and heartfelt at times, more spoken word piece than play. It can also be playful and fun.

If you want to see a show that affirms the human soul, this is it.

The ensemble cast is brimming with local metropolitan talent. Kaisha S. Huguley is Berdette, a woman who has chosen not to speak. She excels in a scene where she gets ready for her wedding, interacting with a mother who is not there. Marlon Russ is Joseph, another patient, who is staying at the hospital against his will. A professional Clown, he excels in the physicality of the character, especially in the “Game of Life” scene.

Wilma Lynn Horton, a recent graduate of Howard University’s Theatre Arts program, is Shirley, a young woman whose lack of connection and identity forces her to retreat inward. Horton effortlessly paints Shirley as a complicated and nuanced character.  Robert Hamilton is Sam, a father and husband whose anger has forced him to retreat as well. He excels in a scene that shows the disparity between an individual’s thoughts and actions, where his inner thoughts are played out by Huguely and Stewart.

Alison Talvacchio plays the Head Counselor Nurse Ryan, who is trying to hold together the patients of the hospital, while keeping herself together too. Eli El, is particularly astounding as Sam’s father, David, in a scene where he tries to convince his estranged son to speak to him.

Shaquille “Shaq” Stewart plays Phil, Berdette’s hapless husband, and Chuck, Joseph’s enviable neighbor who takes care of a local park. In both of these roles, along with his aforementioned personification of Sam’s inner thoughts, Stewart is energetic and delightful to watch.

Stanley Zukeh Freeman is hilarious as Alex, a voice salesman.  Damion Perkins is absolutely charming as Joseph’s wife. They work together to create an adorable middle-aged couple from Ghana, who serve as outside spectators in the play in a very entertaining way.

The Mead Theatre Lab as a venue is intimate and malleable, especially suited to a play such as this.  The technical aspects of the show are simple but deliberate. Lighting Designer, John D. Alexander, a recipient of the Kenan R. William Lighting Design Fellowship, creates a fresh and subtle lighting design that does not take away from the actors.

The costumes, designed by Jasmine “Queenie” Shelton are the most fully realized technical part of the show, which makes sense due to the shows emphasis on character. The costume pieces add to the play instead of take away from it.  In particular, the robes that the four patients wear are all indicative of their different backgrounds and personalities.

Running Time: One hour and 40 minutes, with a 5-minute intermission.

Voices the Play runs through May 22, 2016 at RoseProse Productions performing at Mead Theatre Lab at Flashpoint – 916 G Street, NW, in Washington, DC. For tickets, purchase them online.