Theatre Review: ‘War of the Worlds!’ at Scena Theatre 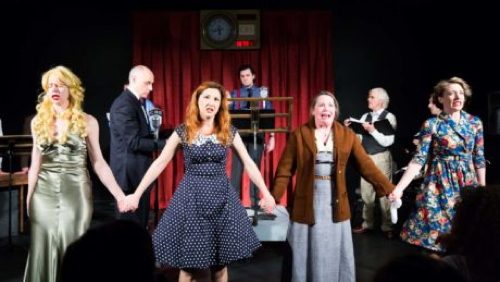 In an age when we are all held hostage by click-bait and personal algorithms—which, as the news keeps reminding us, distort reality for commercial and political gain—it is a comfort to know that we’re not the first generation of Americans to be hijacked, en masse, by the mass media.

Scena Theatre’s Artistic Director Robert McNamara has revived his wacky, somewhat chaotic re-enactment of Orson Welles and Howard Koch’s brilliant War of the Worlds, the famous radio show so realistically staged that people across the United States thought we had been invaded by Martians. (You saw that right – not Mexicans, Martians.) Featuring a large cast of “studio” actors and radio audience members (scattered throughout the house) providing commentary, McNamara celebrates one of American theatre’s most vital eras, and the work of one of the performing arts’ most brilliant, mercurial artists.

…you really should treat yourself to this brief but energetic sci-fi classic.

Led by Zach Roberts, who ably embodies actor-director Welles himself, we are treated to the interior of a radio studio, where Welles stood on a podium, behind his own mike, literally orchestrating the evening’s program. The Mercury Theater cast—led by Jim Jorgenson, Kim Curtis, Buck O’Leary and a small host of others—weave deftly through the space, tag-teaming the mic as they finish each other’s voice-overs and create a small world of characters. (If it helps, keep in mind that no Martians speak; they kill with death rays and poison gas from afar). Meanwhile a chorus of panicked listeners, led by Ellie Nicoll and Charlotte Akin, create an amusing counterpoint to the radio studio, giving you a glimpse of the chaos outside.

Michael Stepowany makes good use of the intimate black-box space at the Atlas, with several period touches from radio’s Golden Era. Meg Holeva has created a wide variety of period costumes, reflecting the diversity of the actors’ fortunes as well as those of the various audience members who—from the cocktail set to the farmlands—were fooled by the broadcast.

If you want a glimpse of one of American Theatre’s great moments, you really should treat yourself to this brief but energetic sci-fi classic. The cast is starting to gel, with most of its bits of stage business ready for prime time; there are a few kinks here and there – the panic among the “audience” members sometimes results in incomprehensible dialogue, and there is potential in a few moments that are not yet fully realized. This production moves on to an international theatre festival in Prague at the end of May, and should be a huge hit there as well.

CRITIC’S EXTRA – THE HISTORY OF “WAR OF THE WORLDS”

If you’re unfamiliar with this classic here’s the back story—one that every theatre aficionado needs to know:

On October 30, 1938 a new radio series, “Mercury Theatre on the Air,” led by the precocious actor-director Orson Welles, produced an updated version of an old Edwardian science fiction novel about a Martian invasion of the planet Earth. “The War of the Worlds” by H G. Wells was a success in its day, and given Mercury Theatre’s reputation for performing classic Western literature in radio form they could have easily given a pleasant, period version of this nostalgic favorite to help everyone celebrate Halloween.

But Welles, with all the malevolent glee of the neighborhood punk hell-bent on egging every house on the block, ditched the original book and asked his house scriptwriter, Howard Koch, to create a version in which the Martians invade the USA, beginning with modern-day New Jersey. Given the low ratings his show usually received – he was up against a variety show starring world-famous ventriloquist Edgar Bergen and his randy dummy, Charlie McCarthy—Welles expected that a small circle of devoted fans might get a kick out of his conceit, and little more.

What Welles didn’t bank on was that Bergen’s fans would be bored out of their skulls by some tenor who hung onto the mike, aria after aria; so after the first 10-11 minutes fans started to change channels – and found “War of the Worlds” already in progress, with an “on the scene” reporter describing a curious extraterrestrial object emerging from the swamps of New Jersey. (Grover’s Mills, to be precise. You can visit there, it’s a real town.)

Because Mercury Theatre had no sponsors, and hence no ad breaks, Welles had a whole 40 minutes in which to stage the Martian’s destruction of the entire eastern seaboard, complete with the spectacularly realistic gassing of all Manhattan. Newcomers to the show had no idea it was just a play, and were completely taken in by the actors’ skillful use of contemporary voices, sound effects, etc.

To say all hell broke loose is an understatement.

Welles tried to get the cast to change their delivery, but that only made things worse. After the conclusion of the show, Welles improvised a little epilogue apologizing to anyone who thought the show was real. At a press conference the next morning (he spent the whole evening across the street with the same cast, rehearsing his next stage production), Welles was incredulous; I mean, we’re talking about Martians after all. After the fuss died down Mercury Theatre on the Air found a commercial sponsor, which ensured the series would continue for a few more seasons. It was a less than glorious partnership, but money being money Welles took it in stride, remarking simply ‘If we can get you to believe in Martians, maybe we can get you to believe in Campbell’s Tomato Soup.”

The notoriety from this production soon propelled Welles to a brief but amazing career in Hollywood, and—when Hollywood soured on him—an even longer career as an avant-garde film director constantly juggling projects, half of which never made it to the screen.

Running Time: 1+ hour, with no intermission.