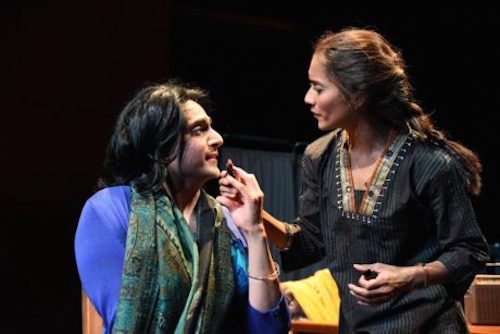 A changing climate—that’s not a bad way to characterize life in America right now. Sure, we (almost) all agree that our planet’s actual physical climate is changing, at best causing intensifying meteorological mood swings.  But our other climates are fast changing too—demographics, culture, technology. The majority of the U.S. population is projected to be composed of minority groups by 2044. That change and others have provoked a swirling storm of responses, perhaps most sharply displayed in the colorful events of this election year. Mosaic Theater Company’s When January Feels Like Summer, written by Cori Thomas and directed by Serge Seiden, rides the cusp of this multidimensional climate shift, inviting viewers to let go, learn, love, and adapt.

Set in Harlem, one of America’s most ethnically diverse neighborhoods and a shifting climate all its own, this play brings together a collection of characters that would have been far less plausible even a decade ago, capturing the strength and richness of modern American urban life and uncovering the humor, intrigue, and profound humanity lying just below the surface of the lives we brush past every day.

An immutable transgender Indian immigrant, a compassionate but lonely sanitation worker, a pair of environmentally concerned fast food employees, and an immigrant woman hanging on to the last thread of her loveless marriage—these are the unlikely characters that Thomas builds this story around. At first they seem confined to their culturally segmented, ethnic “tribes,” but as the play’s climate shifts, the standard boundaries that divide these neighbors give way to mutual discovery and new-found acceptance, appreciation, and yes, love.

In contrast to weightier previous installments of Mosaic’s first season, this production swirls with lighthearted, hilariously awkward, and sometimes downright bizarre moments—both head turners and head scratchers. Though the greater plot arc is fairly predictable, it’s the smaller scenes and one-on-one interactions that shine most brightly.

Jeremy Keith Hunter and Vaugh Ryder Midder earn the most laughs as the hysterical, mutually deprecating pair of pals, Devaun and Jeron, who swap wild work stories, trade jabs at one another’s ineptitudes, and conspire to save the neighborhood from creeps and wacky weather. Hunter and Midder’s antics are endearing, redeeming even their character’s most cringe-worthy moments. Lynette Rathnam and Shravan Amin win plenty of chuckles too, presenting a culturally confused set of desi siblings, each at their own crossroads of identity, and each at odds with the other about what to keep and let go. Rounding out the cast is Joe, the bumbling, softhearted loner garbage man, played by Jason B. McIntosh, who serves as the rock of this production, projecting a steady presence against his colleagues’ more turbulent personalities.

Highly juxtaposed set design by Debra Booth reflected the mixed-up nature of the show, mashing together a train car, a convenience store, a hospital ward, a New York City street, and the characters’ homes all on the same stage. The set pieces that defined each of these scenes are left intermingled for the entire production, perhaps to the slight unease of those audience members who don’t like the food on their plate touching. Ample, targeted lighting by Max Doolittle jumped around the stage, serving to further contrast each of these scenes against the others. David Lamont Wilson, Michelle Elwyn, William M. Woodard, and Allie Roy kept the audience attention where it was wanted, with crystal clear sound, integrated props, and seamless transitions. Robert Croghan appropriately matched each character’s costume to his or her persona—a task complicated by the challenge of convincingly condensing months of a character’s gender transition into two hours.

More mixing bowl than melting pot, When January Feel Like Summer is a real, sometimes unnerving exploration of both individual and communal redefinition. Symbolically presided over by the Hindu deity, Ganesh, known as the great remover of obstacles, it clears a path toward a world where most of the changes don’t feel so stark.

When January Feels Like Summer plays through June 12, 2016, at Mosaic Theater Company of DC performing in the Lang Theatre at Atlas Performing Arts Center, 1333 H Street NE, in Washington, D.C. For tickets, call the box office at (202) 399-7993 ext. 2, or purchase them online.