1. The Man In The Iron Mask at Synetic Theater.

“All for one, and one for all! Get to the theater before there are no tickets at all.” – Brian Bochicchio.

Synopsis: In this follow-up to The Three Musketeers, our hero D’Artagnan finds himself alone in the service of King Louis XIV after his comrades have retired. Unbeknownst to D’Artagnan, his old friends plan to remove the corrupt King, and replace him with his good twin, held captive in the Bastille! The Man in the Iron Maskpromises more swashbuckling blockbuster adventure, rich in bombast and pageantry. This production will have dialogue. 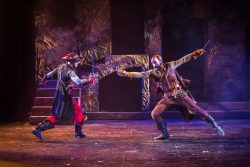 Shu-nan Chu as D’artagnan and Ben Cunis as Athos. Photo by Johnny Shryock.

2. Next to Normal at Silhouette Stages.

“…there is plenty of drama and over 30 songs to keep you going on this emotional roller coaster.” – Pamela Steinik.

Synopsis: Next to Normal is a rock musical with book and lyrics by Brian Yorkey and music by Tom Kitt. Its story concerns a mother who struggles with worsening bipolar disorder and the effect that her illness and the attempts to alleviate it have on her family. The musical also addresses such issues as grieving a loss, suicide, drug abuse, ethics in modern psychiatry, and the underbelly of suburban life. 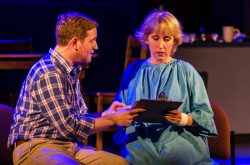 Synopsis: A live video game performance (where the audience controls the action) created by German theater collective machina eX. Presented in partnership with the Goethe-Institut Washington. In this live-action twist on the familiar “escape the room” video game, two audience teams must help their human avatars escape from the clutches of an evil mastermind, using only the materials at hand to find the keys, unlock the doors, and beat the clock. 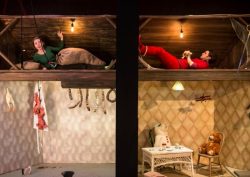 4. War of the Worlds! at Scena Theatre.

“…you really should treat yourself to this brief but energetic sci-fi classic.” – Andrew White.

Synopsis: Relive the infamous radio broadcast that terrified America! On Halloween 1938, the legendary actor/director Orson Welles performed a live radio broadcast depicting giant green Martians invading Earth. A series of “News bulletins” portrayed mass destruction, military battles, and vast chaos. As a result, millions of US citizens panicked and looted storefronts, believing mankind was truly doomed. Scena Theatre’s imaginative stage version returns to DC with an all-new cast for a limited run. Then, it will tour to the renowned Prague Fringe Festival in the Czech Republic. Don’t miss director Robert McNamara’s exciting, rapid-fire stage version of an historic American classic. WAR OF THE WORLDS! is a rich and riveting theatre experience for all ages–don’t miss it.

Synopsis: Hedda Tesman returns from her honeymoon to the brutal banality of domestic life: an antagonizingly bland husband; a living room full of dying flowers; and a house that is too large, too cluttered, too bourgeois for the once unstoppable Hedda Gabler. Both tormented and merciless, she is caught between her appetite for sensation and acute awareness of  public perception. Mark O’Rowe’s stunning contemporary adaptation is a mesmerizing study of power, control, and self-deception and a nuanced portrait of one of the most fascinating figures in modern drama. 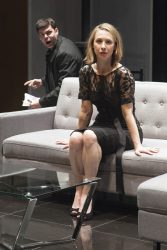