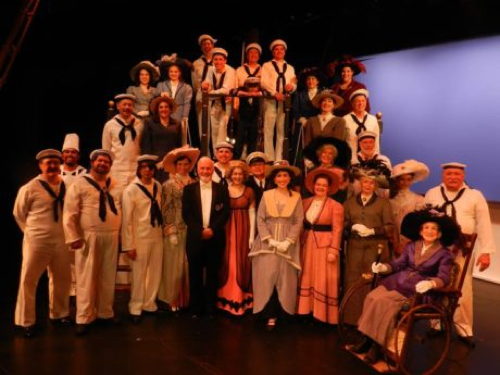 The cast of H.M.S. Piinafore. Photo by Harvey Levine.

The Victorian Lyric Opera Company is committed to bringing the community light operatic works, and has once again delighted us with a Gilbert and Sullivan classic, H.M.S. Pinafore. A much loved operetta, this production was a delight to watch, with its quick wit, playful dances and charming love scenes.

H.M.S Pinafore, a G&S fan favorite, takes place at the Royal Navy Dockyard of Portsmouth, England, on the ship deck with high-spirited sailors and love swooning ladies. The Captain planned for his daughter, Josephine, to marry Sir Joseph Porter, but unbeknownst to him, she has fallen in love with one of his sailors, Ralph Rackstraw. Of course, being of low rank, Ralph would be unsuitable for Josephine. As in the traditional G&S way, we learn of a plot twist that will change things around.

…this production was a delight to watch, with its quick wit, playful dances and charming love scenes.

Directed by Catherine Huntress-Reeve, H.M.S Pinafore was filled with fun and lively dance numbers. Because the Titanic is mentioned in the operetta, setting the show in 1912 was a smart way to suggest the similarities between the two stories. The costumes were colorful and the staging was filled with whimsical moments and well timed humor. The chorus was a well-rehearsed vocal force. The men’s chorus was especially enjoyable in the opening scenes, as they set up the ship deck, and sang their merry numbers.

The patter in Gilbert and Sullivan operettas is nonstop, and the entire cast did a brilliant job in clearly delivering the fast paced English. There was even thought put into the intermission. Out came one of the sailors who tidied up the “ship deck” and mopped the stage floor, getting it ready for the second act.

Amy Broadbent’s lovely soprano voice was perfect for her role as Josephine and blended well with David Merrill who sang the role of Ralph Rackstraw. (Josephine will be sung by Kathleen Alvania on June 19th). Another cute couple was Amanda Jones (Little Buttercup) and G. Stephen Stokes (Captain Corcoran). Jones’ warm voice was a delight to the ears. Gary Sullivan singing the role of Sir Joseph Porter had many funny moments and Carla Rountree was hilarious in the small role of Cousin Hebe. Steven Quintillian (Dick Deadeye) was a convincing mischievous yet pitiful villainous character.

The orchestra was the highlight of the show. Wonderfully conducted by Music Director, Joseph Sorge, they brought the score to life and treated the audience to a Gilbert and Sullivan music feast. (Rebecca Henry, VLOC’s Assistant Music Director will be conducting June 19th).

H.M.S. Pinafore plays through June 19, 2016, at The Victorian Lyric Opera Company performing at The F. Scott Fitzgerald Theatre in Rockville Civic Center Park, 603 Edmonston Drive in Rockville, MD. For tickets, call the box office at (240) 314-8690, buy them at the box office 2 hours before each performance, or purchase them online.