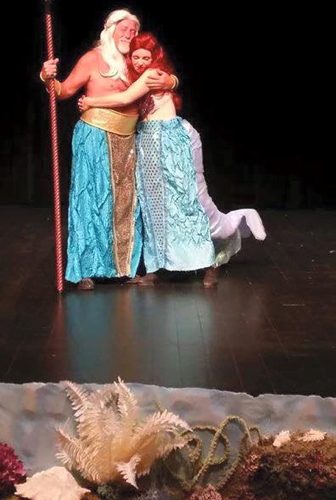 Bring a beloved Disney film to the stage, add some dazzling undersea costumes, and make sure you have all the original songs we love, and it’s a recipe for success. The Little Mermaid, presented by Charm City Players, showcases voices and dancing that will make you glad you voyaged under the sea.

We all know the story… Ariel (Coreen Ayr Hamilton) is a teen mermaid obsessed with the human world. Although her father, King Triton (Joe Mannherz) warns her that contact between merpeople and humans is forbidden, Ariel has a mind of her own (just like any other stubborn teenager). She’s on the surface of the water with her friends Flounder (Logan Dubel) and Scuttle (James Gilbert) when a storm hits and Prince Eric (Chris Fotis) is thrown overboard. What choice does she have? She rescues the Prince and falls in love with him.

Of course, like any dad (on sea or land), King Triton is furious and destroys all of Ariel’s precious human objects. So… Ariel can’t help but be tempted when Ursula (Jennifer Grundy Hollet) presents her with a proposal – she can become human for three days. If Eric kisses her, she stays human. If not, Ursula gets her soul. And she only has to give up her voice. Hmmm… if only Ariel was a better negotiator.

…showcases voices and dancing that will make you glad you voyaged under the sea.

Don’t worry… Eric finds Ariel and even without a voice she can wow the Prince. And like any good Disney film, it all ends happily ever after.

The costumes in this production (Lynn Kellner, Jennifer Grundy Hollet, Mary Hoover, Sandy Rybcyznski) are worth the price of admission alone. Each one was more spectacular than the next. Sebastian (Bradon Shaw) shone in his red suit and top hat. Flounder (Dubel) was adorable in his trademark yellow and aqua fish costume. And Ursula (Grundy Hollet) was the epitome of the evil queen with an elaborate costume featuring tentacles and webbing which made her seem larger than life. Then there were the mersisters decked out in their tails and brightly colored wigs, Scuttle (Gilbert) with his feathers and orange striped tights, and all the sealife – shiny jellyfish, fluorescent fish, and even some sting rays. Flotsam and Jetsam (John Gurtshaw and Charles D. Willett II) had an added surprise – they glowed in the dark, looking just like those evil electric eels. Each and every costume made me say ‘wow’… it was like being inside a technicolor aquarium.

Ariel (Ayr Hamilton) had a gorgeous voice and was totally believable as a young princess in love. And even when she didn’t have a voice, she had no problem communicating her excitement over the new human world – or her love for Eric. Bradon Shaw, as Sebastian, was a standout – complete with the trademark Caribbean accent and the wit and enthusiasm we expect from his character. Gilbert’s Scuttle was the perfect goofy gull – forever mixing up human words and human objects. And King Triton (Mannherz) had depth as a single father mourning his wife and trying to deal with the youngest of his seven daughters. Plus, in this version, Ursula is his sister… and who would want to be related to someone like that?

What’s a musical without dancing? In this version, there are some tap dancing seagulls, and frankly, I didn’t know gulls could tap so well. The mersisters also had their moment – performing in perfect unison in “She’s in Love.” And though Ariel can’t speak, she can express emotion through her feet as she dances with Eric in “One Step Closer.”

Blending the land and sea on stage can be a challenge. Stephen Napp and Annemarie Pallanck used lighting to make the stage floor look like rippled water. Then there was Eric’s ship up above, which was perfectly constructed with wooden planks, a railing, and helm. Ariel’s grotto shone with human objects and stones (until her dad destroyed it, which was actually kind of cool to watch). And there was a fantastic panel of shiny aquas and golds which covered the ship when the mersisters came out to sing. Ursula’s evil underwater lair was complete with a glowing shell and magic seaweed-encrusted crystal ball. That said, there were many times in the show when the set was just the black curtain, which was kind of disappointing. But when the sets came out, they were truly sea-worthy.

I went on opening night so there were some technical issues with sound and the curtain, but I’m sure these will improve in future shows.

Also worth mentioning is the Royal Tea Party, which can be added on to your ticket. With Ariel and her friends as hosts, you can greet the characters, take pictures, and get autographs. Plus, there’s light fare food and drinks. Although I missed the tea party, the lobby had a lot going on – fun life-sized cutouts of the characters, a silent auction, face painting, and even some of the characters from the show.

Charm City Players’ The Little Mermaid will make you glad the Disney film was made into a musical… and that Ariel and Eric let you be ‘part of their world.’