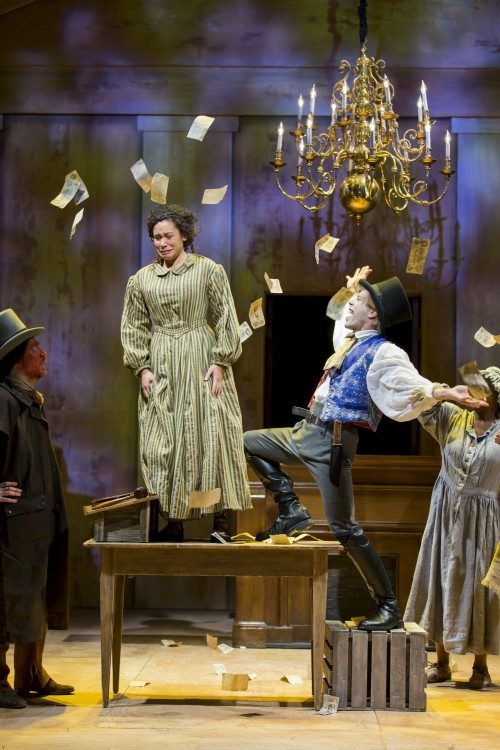 We need to talk about An Octoroon: a razor-sharp, thought-provoking, radical, comical blast from the past. Playwright and DC native (bonus points) Branden Jacobs-Jenkins returns to Woolly Mammoth for the DC premiere of An Octoroon, an adaption of the 1859 melodrama, The Octoroon, by Anglo-Irish playwright Dion Boucicault.

The Octoroon is set at Terrebonne, a Louisiana plantation on the brink of financial ruin. When the new owner, George Peyton (Jon Hudson Odom), takes ownership of Terrebonne, he falls in love with his uncle’s illegitimate, one-eighth black daughter, Zoe (Kathryn Tkel). When the flailing plantation goes up for auction, and Zoe along with it, violence and chaos ensue.

…something to be proud of…

The Octoroon features a large cast as well as the use of black and red face, a common 19th century theatre practice that is taboo today. Intent on challenging his audiences, Jacobs-Jenkins uses facial makeup in An Octoroon to explore racial identity and exploit the critical boundaries of right and wrong on the stage. Jacobs-Jenkins uses facial makeup to ask what roles are you allowed and not allowed to play? Is it permissible for a black actor to wear white face? How far can he push the audience?

Jacob-Jenkins’ adaption intertwines his and Boucicault’s preoccupation with racial identity and stereotypes. An Octoroon‘s prologue features a one-sided conversation with a modern-day black American playwright, BJJ (Jon Hudson Odom), as well as the re-incarnation of Dion Boucicault (James Konicek) and his silent assistant (Joseph Castillo-Midyett). BJJ vents his frustration with the label of “angry black playwright,” a stereotype that Jacobs-Jenkins has faced. Also angry that all his white actors have abandoned his adaption of The Octoroon, BJJ rebels and dons white face to play the roles of M’Closky, an icky Southern plantation owner, and George, a refined romantic (also plantation owner).

Dion dons red face to assume the role of the American Indian Wahnotee and the sun-burned auctioneer Lafouche. Dion’s white assistant dons black face to assume the cringeworthy, heavily controversial roles of a slave named Pete and Paul, a young slave boy. So yes, not only is Castillo-Midgett a white man playing a black man in black face but he also portrays a small child. This is the point for me that An Octoroon became almost unbearably cringeworthy. Knock and Castillo-Midyett’s commitment to their controversial roles are admirable. Hudson Odom is dynamic, charismatic and just so watchable that it is impossible to imagine any other actor in those roles. His command of the stage and his myriad of characters is absolute. Having never before seen Hudson Odom in another role, I am still itching to proclaim An Octoroon his break-out moment.

Boucicault wrote in melodramatic style but Jacobs-Jenkins makes a concession to the 150-year gap the audience has suffered and updates the language of some of his characters his adaption, An Octoroon. Two slave women, Dido (Erika Rose) and Minnie (Shannon Dorsey) speak in contemporary verse and in doing so act as our eyes and ears, our translators, our voice of reason. Dido and Minnie are the comic relief of the production, the voices of the blunt truth, our translators. Rose and Dorsey manage the most unbelievably realistic exchanges onstage with such precise comedic timing.

Maggie Wilder plays Dora, an heiress with her eye on George, is funny, yet powerless as a woman of the era, despite her vast fortune she plays a peripheral role. Zoe retains her melodramatic voice and character. Her woes carry her from one side of the room to the next, envelop her in tears and eventually drop her to the floor. Zoe retains her original function as a melodramatic character, which is to make us emotional. Tekl is lovely and lyrical in her role as Zoe but the character is easily forgettable. An Octoroon is about a collective experience, rather than Zoe’s experience as the octoroon.

The mash-up of past and present dialogue, skin color and satire challenge the audience. Can the audience see beyond the color of skin? Does a person’s skin color tell us their whole story? What is our obligation to see beyond a person’s skin color? The character portrayals are so astounding and diverse that one minute you will be laughing hysterically but the next you will want to cry. Jacobs-Jenkins stretches the boundaries of so-called acceptable good-taste in ways that leave audience members and critics alike scrambling.

An Octoroon is directed by Nataki Garrett with Set Design by Misha Kachman, Costume Design by Ivania Stack, Sound Design by Patrick Calhoun and Lighting Design by Colin K. Bills. Kachman’s set design reflects the original melodramatic style of The Octoroon; a mix of contemporary re-imaginings of plantation life and over the top melodramatic set pieces, including subtle throwback touches like a red curtain with gold tassels. Garrett’s actors’ portrayals are intentionally over-the-top, melodramatic satire of very real standards and stereotypes. Three hours goes by quickly thanks to a cast who has tapped into their funny bone and Jacobs-Jenkin’s super engaging script.

An Octoroon is multi-layered. Woolly Mammoth recognizes the complexity of An Octoroon and has partnered up with DC area change makers, artists, activists and thought leaders for a provocative series of engagement opportunities around every performance of An Octoroon. Their words, not mine.

An Octoroon is the cherry on top of an only so-so season for Woolly Mammoth. Every moment in the almost three-hour long play is important, informative, engaging. Woolly Mammoth knows that they have something to be proud of on their hands.