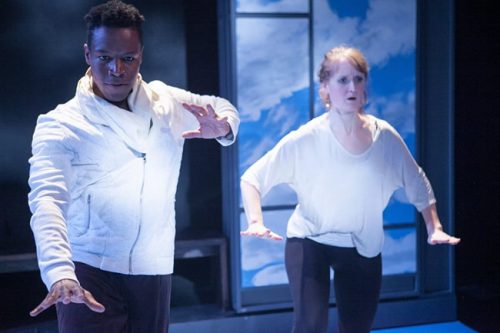 That second-to-last letter in the LGBTQ acronym represents a segment of the community that is probably least visible and least understood. Ballast, written by Georgette Kelly and directed by Margot Manburg is an emotionally turbulent play that follows the dreams and nightmares of transsexual people and the ones they love as they seek legitimacy and acceptance through change—as much from themselves as from those around them.

Ballast tethers the contrasting narratives of two individuals who have little in common beyond their shared gender dysphoria: Xavier, an urban, Jewish teenager of color, and Grace, a waspy, middle-aged, suburbanite pastor. Finding themselves at vastly different stages in the journey of harmonizing the exterior and interior, both yearn for full acceptance from their families and communities, while discovering that a decision to embrace their gender identity will bring inevitable, existential change—not just for them, but for everyone in their orbit.

Good acting doesn’t require an elaborate set, and this production proved it.

There are always risks involved in portraying members of a marginalized, frequently misunderstood minority community, but Manburg and her sensitive cast did not shy away. Perhaps Jen Rabbit Ring (a cisgender woman) faced the steepest challenge in playing Grace, a married trans woman who had recently finished transitioning. If audience reaction during and after the performance offered any clue, it’s safe to say Ring’s portrayal was both respectful of and accurate in displaying the broad range of questions and feelings that a trans woman in her situation could experience. The younger Tyasia Velines brought authority to the role of the troubled Xavier, drawing upon her own life experience as a non-binary person. Confident in his identity, but beleaguered with self-loathing, Tyasia’s Xavier encapsulates a level of the dysphoric complexity that feels authentic for a teen in his situation.

Chelsea Thaler masters the spacey mannerisms and spasmodic, contradictory antics of a cheeky teenager as Savannah, Xavier’s loyal but impish girlfriend. Goading one minute; endearing and profound the next, Thaler captures the mysterious paradox of the American adolescent. Meanwhile, Dallas Milholland castes a counterweight to Savannah in Zoe, Grace’s kind, loving wife who is still grieving the loss of the man she married. These two women’s characters were especially intriguing to watch interact, as Zoe—an otherwise superior in maturity—begs a disinterested Savannah for advice on how to live with and love a trans partner, post-transition. In her airy dream sequences that give the play its name, Milholland reveals Zoe’s flighty alternate persona that longs to fly out of the cage that her marriage has become.

Reginald Richard, Crystal Swann, and Sarah Holt demonstrate dynamic versatility in a colorful rainbow of crucial supporting characters. Richard was haunting as Figment, the deriding personification of the strong, confident man Xavier aches to become, then in a near about face, gets his sassy on as Tilly, Grace’s high-heel clacking gal pal, also a trans woman. He also rises to new heights of poise as Zoe’s aloof flight instructor. Swann and Holt bore the mantle for the great big world outside of the LGBTQ community: characters like Mrs. Grabowski, Maureen and the Bishop—caring and well-meaning family and friends who genuinely struggle to understand, empathize or accept. Swann carried the weight of an emotionally burdened and confused mother, while Holt offered familliar humor as the flabbergasted mother-in-law who keeps mixing up her pronouns.

Good acting doesn’t require an elaborate set, and this production proved it. Strategic use of stage lighting was all that was needed conjure up a wide array of scenes, with the starkest contrast between Zoe’s brightly lit flight lesson scenes, and Grace’s and Xavier’s shadowy nightmares. The stage floor and backdrop were painted to look like a sky full of cumulous clouds, only fully illuminated to great affect during dream sequences.

Ballast offers insight and comfort, as much for those seeking to understand that second-to-last T in the acronym, as for those who know it intimately. In a sky full of change, it’s those who can accept it, adapt and let go that will keep soaring.

Advisory: Adult themes and language. Not recommended for young children.