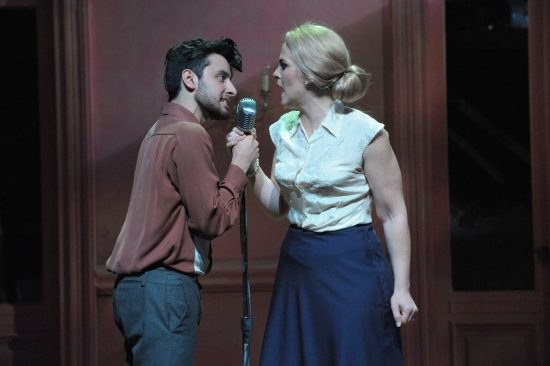 As we get immersed in the political season in the U.S., one should recognize that what we have here—divisive and often angry politics—is quite tame compared to other periods in our world’s history. The political atmosphere during the 1940s to 1950s in Argentina, which was at times tumultuous and deadly, forms the backdrop for the musical Evita that is currently playing at the Olney Theatre Center.

Andrew Lloyd Weber’s music and Tim Rice’s lyrics powered Evita to seven Tony Awards in 1980 with the musical achieving considerable success throughout the world. The lyrics and storyline of the musical are based on Mary Main’s biography, Evita: The Woman with the Whip.

The story, told mostly through song, spans the rise to prominence of Eva Perón from her impoverished beginnings at the age of 15 to her ascent to power by becoming Argentina’s First Lady and concluding with her early death at the age of 33.  Along the way, Eva was a radio actress who had reportedly slept around to gain advantage. She met a military colonel Juan Perón at an earthquake relief concert and eventually became his wife prior to his becoming the country’s president.

The direction is taut and well-paced; the choreography is extremely precise…

Through her position Eva was a champion of the descamisados, the shirtless poor of Argentina.  She started a charitable foundation and connected with Argentina’s women and the powerless.  However, she was reviled by the country’s wealthy elite class and the military.

While historians and authors have debated over the years the historical accuracy of Rice’s portrayal of Eva derived from Main’s work (there have been criticism that her positive attributes have been understated) and questioned the use of the name “Che” as the show’s narrator, the production at Olney will please no matter your political persuasion.

Director Will Davis and Choreographer Christopher d’Amboise who had collaborated on the hit Colossal at Olney in 2014 garnering Helen Hayes Awards for each, teamed up with Musical Director Christopher Youstra and an extraordinary company to present this adroitly performed iteration of Evita.  The direction is taut and well-paced; the choreography is extremely precise while Mr. Youstra’s seven-person orchestra provides the right balance in support of the vocalists.

Lloyd Weber’s splendid score encompasses an eclectic array of music including classical, rhythmic and ballads. “Don’t Cry For Me Argentina” sung by Rachel Zampelli as Eva is the show’s popular signature song with its emotional power.  “And the Money Kept Rolling In” is a favorite of mine not just for the musicality and clever lyrics but also for its snappy choreography.

Ms. Zampelli, who had appeared on the Olney stage in Avenue Q and Godspell, plays her role with passion and nuance.  Patti LuPone, who starred in the original Broadway production of Evita, characterized the vocal demands of the role as “a part that could only have been written by a man who hates women.”

Ms. Zampelli is up to the challenging task showcasing her crystal clear soprano vocals and is especially effective in the duet with Perón (Nick Duckart) in “I’d Be Surprisingly Good For You.”

In my view, however, the best performance is given by Robert Ariza as Che. The name suggests that the character is the revolutionary Che Guevara who happened to have been Argentine.  No customary military attire and no other references to Guevara are in the show.  Instead, Che is generic and performs as the story’s “narrator” who binds the plotline together.

As such, Mr. Ariza is onstage a vast majority of the time and performs in all but a few of the show’s musical numbers though never as a solo. He possesses a flawless baritenor voice that because of the required workload, his vocals must stay strong throughout.  And they do.  When called on to dance, he does so very effectively.  Mr. Ariza with his energy and strength commands the stage throughout the production.

Also on stage during most of the show is the exceptional ensemble who symbolizes the people of Argentina. They, too, perform in a wide variety of vocal numbers and dance routines and do so with remarkable meticulousness.

Mr. Duckart as Perón demonstrates vocal prowess particularly in “She is a Diamond.”

Jonathan Atkinson as Magaldi, Eva’s one-time flame, performs well in “On This Night of a Thousand Stars” and “Goodnight and Thank You.”

Jamie Eacker makes a brief appearance as Perón’s Mistress whom Eva dismisses and sends her on her way. Her rendition of the emotional ballad “Another Suitcase in Another Hall” is rightly tender.

Lighting Designer Colin K. Bills does a wonderful job mixing hues throughout with an emphasis on reds and pinks. Ivania Stack outfitted the company in attractive period costumes with Eva’s dresses especially beautiful.

The set designed by Arnulfo Maldonado is functional but not imaginative. The background consists of five glass arch-shaped doors for the performers to enter and exit.  The stage is empty for good reason so that the ensemble can move fluidly through an uncluttered stage.

For the iconic “Don’t Cry For Me Argentina” number, Eva is supposed to stand on a balcony and address the masses below. Instead, she proceeds to the front of the stage to perform the number.  It’s not quite the same.

Evita spans 18 years; however, the static set does not lend itself to a plot moving along such a timeline. That concept cannot be achieved through song alone.

Regardless, Evita is highly recommended if you want to experience an exceptionally well-performed musical classic.