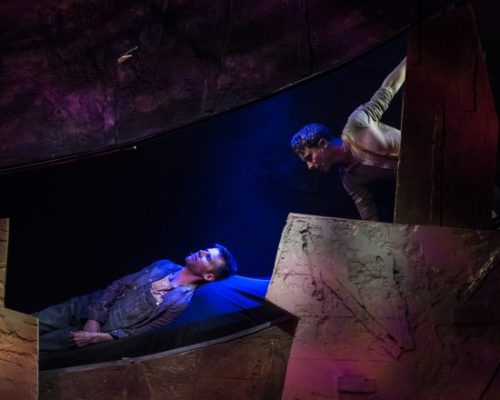 Over the years many musicals have gotten the short end of the stick in terms of having widespread notoriety. What makes a musical click with audiences and producers is anybody’s guess so the fact that 1st Stage is currently presenting the hardly produced off-Broadway musical Floyd Collins should make you stand up and take notice. With Evan Casey in the title role and a stellar cast of performers under the direction of Nick Olcott, 1st Stage must get some kudos for going outside of the musical theatre box.

However, having said that and after seeing it, I understand why this show didn’t get a commercial transfer after its 25 performance engagement at Playwrights Horizons back in 1996. The last time it was seen in this area was back in 2000 at Signature Theatre.

Based on a true story, it is 1925 in Barren County, Kentucky and Floyd Collins (Evan Casey) is a caver with some entrepreneurial ideas. He likes to venture into narrow caves with the idea that one day he can open them up as tourist attractions. He has gotten stuck in the caves twice prior to us meeting him but has always been pulled out safely. The third time he makes the trek into Sand Cave he isn’t so fortunate. He becomes trapped in a narrow passage after heavy rock falls on his legs.

The rescue effort gained national attention with reporters including Skeets Miller (Edward C. Nagel) being sent from all over to cover the story. This in effect became the first media circus with all kinds of people looking to cash in on Floyd’s misfortune. One of these slime buckets is H.T. Carmichael (Joshua Simon) whose engineering company swears he can get Floyd out and employs local cavers to help him in his effort. What he doesn’t say is that he is up for a promotion with his company. The only two people small enough to fit into the cave are Miller and Floyd’s brother Homer (John Sygar), who for good reason doesn’t trust Carmichael. There are several failed attempts to rescue Collins but the circus continues as Cliff Roney (Benjamin Lurye) arrives to make a film about the proceedings and offers to feature Homer as the film’s lead subject.

In the middle of all of this we have Floyd’s stepmom and dad Nellie and Lee (Jennifer Lyons Pagnard and Scott Sedar) who reluctantly open their farm up to the masses in hopes the attention will rescue their son. There is also Floyd’s sister Nellie (Maggie Donnelly) who has just been released from an institution and wants to rescue Floyd herself but is refused all the time because she is a woman and of her supposed mental status.

The issue I have with Tina Landau’s book is that the story feels a little bit heavy on the media side of things and not focused enough on Floyd’s survival in the cave. By the end he is talking to crickets to keep his own sanity for goodness sake. Every time Floyd’s story gets interesting the plot involving the press breaks the heart wrenching ride, so what we are left with is a book that lacks the emotional punch it needs to fully care about the characters. This is probably why despite winning several awards the show never got a commercial producer.

I always enjoy musicals where the score is nothing like I’ve heard before, so to say that Adam Guettel’s music and lyrics (additional lyrics by Landau) make up for what the book lacks is an understatement. Guettel as you might know is the grandson of Richard Rodgers but his musical style is as far away from his grandfather’s as you can get. It’s a very rustic feel but unlike Oklahoma which is big and lush in its orchestrations, Floyd Collins is brilliantly scored for only five musicians by Bruce Coughlin. Under the direction of musical dynamo William Yanesh, who also plays keyboard in the band, the rest of the fine musicianship is comprised of  Jeff Thurston (Violin 1), Cathy Amoury (Viola/Violin 2), Aron Rider (Cello) and Zach Konick on Percussion. There is also onstage guitar for a few of the numbers by one of the ensemble members. Even though it’s only five players, the ensemble gives the score plenty of emotional resonance particularly on such numbers as “How Glory Goes” and “Through the Mountain.”

I am so pleased to see Evan Casey front and center in the lead role of Floyd Collins. Many of us know the from his many supporting roles in such productions at Signature Theatre, Ford’s Theatre and Imagination Stage plus his many years with the Capitol Steps. Here he gets the chance to carry the show and the fact that it’s in a dramatic role so there is that much more reason for you to go see his performance. By the time we hit Casey’s final song “How Glory Goes,” which is the character’s epiphany, you have to say to yourself, “That was something else and how will another performance top it this season?”

Other standout performances include Maggie Donnelly as Nellie Collins. Her vocal performance of “Through the Mountain” is quite remarkable, as is her tenacious acting as she fights for her brother only to have it fall on deaf ears.

If sleaze were an Olympic sport than Joshua Simon definitely would win the gold for his excellent portrayal of H.T. Carmichael. Here’s a character with so much ego he actually makes some of the presidential candidates look like choir boys.

Edward C. Nagel and John Sygar as Skeets Miller and Homer Collins bring welcome human elements as they both try to make Floyd as comfortable as possible while trying to keep his and their own sanity intact.

I very much enjoyed Benjamin Lurye as the sleazy filmmaker Cliff Roney and a special shout out to Frank “chai latte brotha” Britton who can sing quite well and holds his own against the more seasoned vocalists.

Director Nick Olcott does everything possible to make Landau’s book land as it should emotionally but through no fault of Olcott, he ultimately doesn’t succeed. The way Landau’s book is written you can’t win.

I was very impressed by Jos. B Musumeci Jr’s set for this production. He’s got a slightly raked stage with multiple levels and how he handles the cave itself is a testament to his creativity as a designer.

The same can be said for Brian S. Allred’s moody and impressive lighting design.

Overall the chance to see Floyd Collins at all is worth the trip out to Tysons Corner. The fact that you might not come out as moved as you should is made up by the impressive performances and production that 1st Stage puts forth.

Running Time: Two hours and 35 minutes with one intermission.