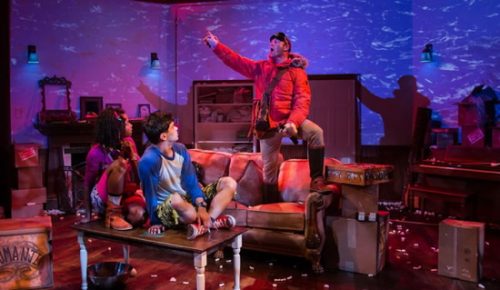 Billie Krishawn as Judy, Ryan Carlo as Peter, and Elan Zafir as The Guide in Jumanji at Adventure Theatre/MTC . Photo by Michael Horan.

Adventure roars in Jumanji! Directed by Serge Seiden, based on the 1982 Caldecott Medal winning book by Chris Van Allsbur and adapted by Sandra Eskin and Adventure Theatre, MTC’s own Michael Bobbitt, Jumanji stampedes its way to Adventure Theatre, MTC as the final production of their full 64th season.

Adventure Theatre’s Jumanji follows closely to the original story about Peter and Judy, who find the mysterious board game in a closet, apparently left by the previous owners of their new house. Their parents are away for the evening, and when Peter finds the old board game and wants to play, Judy relents because of boredom. They find quickly that Jumanji is a jungle adventure contest that is far more real than a game.

This production is completely absorbing. It entices the audience into all of the adventures…

The first roll of the dice blur the line between reality and fantasy as the adventures in the game come to life and hilariously vex Peter and Judy. I don’t want to give away too many visits from the jungle, but let me say there are a lion, a snake, and a few monkeys, who are both very cute and very mischievous. With help from a jungle guide, Peter and Judy realize they must finish the game to get everything back to normal before their parents arrive home.

This production is completely absorbing. It entices the audience into all of the adventures – a complete “4-D jungle experience” as stated by Adventure Theatre. There are fabulous puppets (Andrea “Dre” Moore), eye-catching projections (Patrick Lord) and lighting (Andrew Griffin), gripping sound (Kenny Neal) and special effects (Andrew Berry) and a thrilling and wet monsoon. I’m trying to remember when I had so much fun at the theatre, and I’m having a hard time coming up with one.

Billie Krishawn as Judy is great as a typical teen who has to watch her little brother, but she also shows fear and worry over her situation with ease. Ryan Carlo as Peter perfectly portrays a slightly spoiled pre-teen with too much energy and a lower than average instinct for self-preservation. And every time Elan Zafir, as the Guide, opens his mouth and says his lines, the audience laughs. It’s a given. He’s that good.

We don’t see much of the parents, Julia Klavans as the Mom and Jacob Yeh as the Dad, but as puppeteers they do a great job bringing the numerous and various puppets to life.

Jumanji is the 4th original production done by Adventure Theatre, MTC this season, and I know I have said this before, but cherish how lucky are we that we are able to see this caliber of theatre each and every year. Please don’t miss this one!

Advisory: Recommended for ages 4 and up due to jungle suspense.