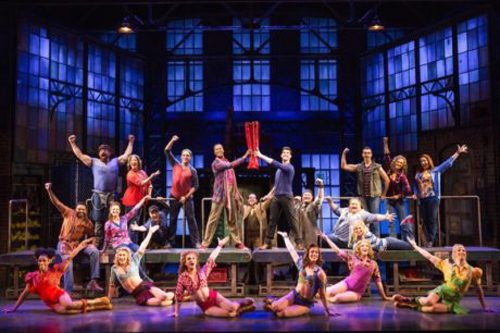 The touring company of ‘Kinky Boots.” Photo by Matthew Murphy.

The musical Kinky Boots was inspired by the 2005 indie British film that was based on the BBC documentary of a true story. It is a tale of the unlikely partnership of a young, straight-laced man who inherits the family men’s shoe factory in Northampton, England, and a smart-talking, statuesque drag queen. Together they devise a scheme to the save the company and the jobs of its long-time employees while on a journey of self-discovery that reveals they are not so different as they seem. The two men share the disappointments and high expectations of their fathers and redefine what makes a man.

…worth seeing for the big, splashy production numbers, a supremely gifted leading “lady” in Ghee and the comic brilliance of Tiffany Engen.

With a book by theater legend Harvey Fierstein and music and lyrics by the 80s pop icon Cyndi Lauper, the musical garnered numerous nominations and awards here and in England, among them six 2013 Tony Awards including Best Musical and a Grammy for Best Musical Theater Album in 2014. The touring company has come to DC’s Kennedy Center Opera House with high expectations. Since it arrived on Broadway, audiences have embraced this joyful show, full of lessons about acceptance – for others as well as of one’s self. There is so much to love – the gorgeous production values by the creative team including David Rockwell’s sets and Gregg Barnes gorgeous costumes to the exuberant choreography and direction by Jerry Mitchell. But this iteration stumbles a bit and the musical just misses the mark.

Though hardworking and earnest, Adam Kaplan as Charlie seemed like a colt just getting steady on his legs. He was clearly having some difficulties in the role, especially in his big musical numbers, and with timing issues. Often singing too much from his nose, Kaplan was also not aided by the uneven sound mixing that sometimes garbled the lyrics. This blunted the impact of some of the character’s most poignant moments. Hopefully as he gains more experience on the tour, it will smooth out the rough edges.

Charlie is off for London to live with his fiancée, Nicola (a talented and under-utilized Charissa Hogeland) and to escape the expectation of his father to eventually take over the Price & Sons shoe factory. When his father unexpectedly dies, he is drawn back in. Charlie discovers the business is outdated and on the verge of bankruptcy as orders are being returned by the vendors. He sees no other option than to close down the factory and lay off its workers.

While back in London to sell the returned stock to his friend Harry (Josh Tolle) who owns a discount shoe business, Charlie comes to the aid of a woman who is being attacked. The “woman” inadvertently knocks him out and Charlie wakes up in the backstage dressing room of Lola, a drag queen played beautifully by the stunning J. Harrison Ghee. Lola is supported by his gorgeous and talented posse of “Angels” – Joe Beauregard, Joseph Anthony Byrd, Sam Dowling, JP Qualters, Xavier Reyes, and Sam Rohloff – all a joy to watch whenever they are on stage.

Lola complains about the lack of quality and strength in the women’s high-heeled boots that he and his “girls” wear while performing. When one of Charlie’s employees, Lauren (the brilliantly funny scene-stealer with a big voice, Tiffany Engen) who also has a huge crush on her boss (“The History of Wrong Guys”), suggests retooling and finding a new niche market, the light bulb finally goes off and he promotes her. Another standout is Jim J. Bullock as Charlie’s efficient and loyal factory manager.

After an initial visit by Lola and the Angels to see Charlie’s first sturdy, but unfashionable attempt, Lola explains that “The Sex is in the Heel.” Charlie convinces Lola to come to Northampton to help design a line of quality boots for drag queens that will debut at a high-end design show in Milan, Italy.

When Lola shows up to work dressed in man’s clothes to fit in, he is mocked by several of the workmen and hides in the bathroom. When Charlie seeks him out, Lola reveals his true name, Simon, and in a touching ballad, “Not My Father’s Son,” they discover how much they have in common.

While Lola/Simon wins over the women in “What a Woman Wants,” the clash with the male factory employees comes to a head, represented by Don (an excellent Aaron Walpole) a stocky, working-class bloke with prejudices and cliché ideas of what makes a real man. Each makes a challenge to the other which results in cleverly choreographed boxing match between Lola and Don, unaware that Lola was trained by his boxer father as a young man. Don, in turn, must endeavor to accept someone for who they are and the result is not what you would think.

Charlie buckles under the pressure of running out of money and time for the Milan show. Full of insecurity and fear, he lashes out at his workers and Lola, alienating them all. Humiliated, Ghee leaves and gives another knock out performance in “Hold Me in Your Heart” while doing his act in a nursing home.

Charlie and the fate of his new line are, of course, brought from the brink of disaster and redemption. In the tradition of a grand Broadway finale, “Raise You Up/Just Be,” offers up hope with a message.

As a fan of the film, I found the book going too fast – the transitions in the relationships not as fully realizes at in the movie version. Feirstein’s Torch Song Trilogy and La Cage aux Folles were much more developed. Also as a fan of the amazingly talented Cyndi Lauper, the songs were solid but perhaps covered too many different styles of music, making the score not as cohesive as it might have been. But in these challenging times, the message couldn’t resonate more.

Kinky Boots is a fun musical and who doesn’t love a fairy-tale success story, especially if it’s based in fact. It is a show worth seeing for the big, splashy production numbers, a supremely gifted leading “lady” in Ghee and the comic brilliance of Tiffany Engen.