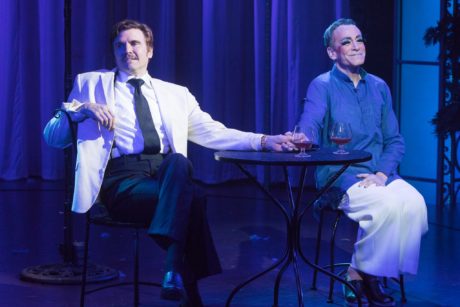 Put yourself back in 1983 for a moment my fellow readers. It was the beginning of the AIDS crisis and Broadway was starting to feel the effects. Many great talents such as choreographer Ron Field and vocal arranger James Raitt would succumb to this dreaded disease in the coming years.

On August 21st 1983 a Broadway musical opened that was revolutionary in the way gays were portrayed onstage. It treated them as humans as opposed to freaks and was a call for acceptance. That musical was La Cage aux Folles and it went on to win seven Tony Awards including best musical.

Almost 33 years later after its Broadway opening, Signature Theatre is presenting this still very important Jerry Herman/Harvey Fierstein classic. With LGBT issues such as marriage equality being a hot topic in this country and the unthinkable mass shooting in Orlando, Florida, the messages in La Cage aux Folles of acceptance and we are all one are still very potent.

…Bobby Smith’s portrayal is not only one of the best performances you’ll see anywhere this season but he makes Albin/Zaza human again.

We are in St. Tropez on the French Riviera at a small club run by Georges (Brent Barrett) who invites his audiences to “Open their eyes” and witness the notorious Les Cagelles. This is no ordinary kickline and La Cage aux Folles is no ordinary nightclub. The Cagelles are men dressed as women portraying such scintillating characters as Hanna from Hamburg (Jay Westin) who works with a bullwhip and manages to seduce Francis the stage manager (Michael Bunce). Francis ends up in a neck brace as his relationship develops with Hanna. That’s what I call an occupational hazard.

The star attraction at La Cage is the high maintenance Zaza whose real name is Albin (Bobby Smith.) Albin and Georges have been in a relationship for many years and have been raising Georges’ son Jean-Michel (Paul Scanlan.) If you’re confused, Geroges has a one night fling with Jean-Michel’s mother Cybil. Jean-Michel is engaged to Anne Dindon (Jessica Lauren Ball) whose father Edouard Dindon (Mitchell Hébert) is the head of an organization that wants to close down all gay nightclubs. When Anne’s parents want to meet Jean Michel’s parents before giving the couple permission to wed, things get hairy. Jean- Michel wants his mother Cybil to be there even though he was raised by Albin. He feels Albin’s flamboyant style and personality will not bode well with Anne’s parents. Thus begins the charade of making Albin more masculine in the person of Uncle Al, making the house over the club more “presentable” and even cleaning up the over the top butler Frances’s (DJ Petrosino) act. This set up and what happens after is one of the many reasons this show still resonates.

When La Cage aux Folles came back to Broadway in 2010 the casting of Douglas Hodge as Albin/Zaza was touted as a tour de force performance. I personally thought he did a total disservice to the character by playing him way over the top. I am happy to say that Bobby Smith’s portrayal is not only one of the best performances you’ll see anywhere this season but he makes Albin/Zaza human again. His performance matches what George Hearn did in the original production. He makes his character someone we all can identify with no matter what our sexual orientation. His act one closer “I Am What I Am” will rip your heart out and leave you unable to move after the house lights have come on.

Brent Barrett’s performance as Georges took me a little while to warm up to. Barrett is a fabulous singer and that is precisely what I’m not use to hearing with this character. If you think about it, “Song on the Sand” has a very minimal vocal range. This is partially because Gene Barry originally wasn’t a singer and Kelsey Grammar in 2010 didn’t have much of a range vocally either. In other words, the role is usually cast with a non singer. Barrett’s acting is quite wonderful throughout and his “Look Over There” in Act 2 is still my favorite song in the show. Barrett’s ringing tenor on that song works perfectly and might be one of the best performances I’ve ever heard performed of that composition.

Other standouts include Mitchell Hébert as the bigot Edouard Dindon. As in Signature’s Gypsy a few years back, Hébert proves he can sing as well as act. This is proven in “Cocktail Counterpoint” which also features the delightful Sherri L. Edelen as Jean Micheal’s mom Marie Dindon. You will also laugh your head off at DJ Petrosino’s Jacob, which is complete with a Jose Jimenez lisp.

Paul Scanlan as Jean-Michael lights up the stage with his big vocal/dance feature “With Anne on My Arm.” His acting matches his singing as Scanlan’s scenes with Smith and Barrett prove how strong Fierstein’s book really is.

The 2010 production of La Cage started in London at a venue that couldn’t house a large orchestra. Jason Carr took Jim Tyler’s brilliant original 1983 charts written for 27  players and reduced it to a measly eight. This unfortunately is the set of orchestration Signature’s production utilizes and, in my opinion, it doesn’t do Jerry’s Herman’s score justice. Herman writes very big and songs such as “I Am What I Am” and of course “The Best of Times” build as they go along so only two reeds as opposed to five and two brass instead of  seven just doesn’t have the same effect. Darius Smith’s ensemble sound good but Carr’s chintzy set of charts don’t give them much to work with.

Matthew Gardiner serves as both director and choreographer and fills this tall order as I expected he would. The material is treated very honestly which is not always the case with this show. He brings out the dignity in Albin/Zaza and even makes Mr. Dindon human by the end of the show. Gardiner brings out all that was already there while making the show still relevant to today’s sensibilities.

Lee Savage’s unit set makes full use of Signature Theatre’s Max space by putting the dressing rooms at the night club in full view of the audience. Frank Labovitz’s costumes are as the song goes perfectly “bawdy, bizarre and also grand.”

Overall this La Cage aux Folles is one to see. Bobby Smith’s performance will leave you spellbound and the work of Herman and Fierstein is as good as ever. Sing “Laaaa DA DA Daaaa” and get yourself some tickets before the show becomes a forgotten yesterday.

Note: Jerry Herman always knows how to express our feelings. In memory of the victims in Orlando and their families, I want to end this piece with a lyric from Jerry Herman’s The Grand Tour. We stand with Orlando!!

So when you are lost in the dark, have the conviction to say.

We’ll be here tomorrow, alive and well and thriving.

If before the dawn this fragile world might crack, someone’s got to try to put the pieces back.

So from beneath the rubble, you’ll hear a little voice say, life is worth the trouble, have you a better choice.

So let the skeptics say, tonight we’re dead and gone.