Theatre Review: ‘Next to Normal’ at Keegan Theatre 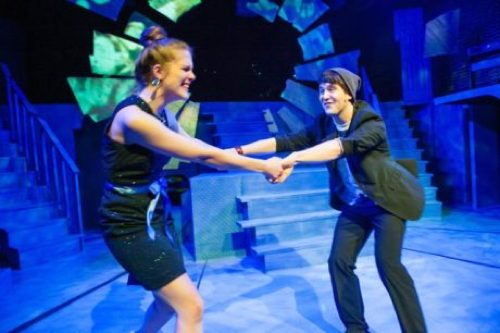 Even in 2016, far beyond the days of Charlotte Perkins Gilman, mental Illness is a topic that is rarely brought up until it is absolutely necessary, such in instances of unspeakable destruction. Enter Next to Normal, a rock musical that exploded on Broadway in 2009 with a powerhouse cast and a driving score, garnering it a whopping eleven Tony nominations.

Co-directed by Mark Rhea and Colin Smith, it’s the story of a family in retrograde. Diana Goodman, played by the remarkable Kari Ginsberg, is trying to maintain her relationships with her estranged family along with the tumult of her own mental disorder. Her husband Dan, Chad Wheeler, has to pull her together when she breaks down, taking her to doctor after doctor, leaving their teenaged daughter Natalie further and further behind.

Keegan Theatre takes the human mind, unravels it and sews it into a quilt of song and spectacle.

Ginsberg brings fragments of the “wife so alive” that Diana used to be, even so much as capitalizing on the brief glimpses of humor that we get into the character. Diana Goodman is set to be this generation’s Hedda Gabler or Mary Cavan Tyrone, and Ginsberg brings a worthy truthfulness to the character. She is heartbreaking in “I Miss the Mountains” and “How Could I ever Forget?”, but the show stopping “You Don’t Know/I am the One” is her brightest moment.

As Dan Goodman, Diana’s loving but emotionally exhausted husband, Wheeler, wrings the audience’s hearts out to dry. He brings out Dan’s own mania in “It’s Going to be Good” and then tempers it with his false security in “A Light in the Dark.”  By the “I Am the One reprise,” Wheeler has drawn us into his shell shocked mind and soul.

Caroline Dubberly plays Natalie – Diana’s headstrong and high-strung daughter, at times the Thea to Diana’s Hedda, and at other times, a Hedda in her own right. She trips around the stage in a triumphant haze in “Wish I were Here” and her vocals on “Superboy and the Invisible Girl” and “Maybe (Next to Normal)” are gorgeous.

David Landstrom plays Gabe, Diana and Dan’s son, and excels in the darkness of the character, especially in the songs “I’m Alive” and “There’s a World.”

Christian Montgomery, last seen as St. Jimmy in Keegan Theatre’s production of American Idiot, plays Henry, Natalie’s stoner boyfriend, who adds comic relief and heart. He especially excels in “Perfect for You” and the “Hey” trilogy.

Dr. Fine and Doctor Madden are played by Scott Ward Abernathy, who has the voice of an angel. “Make up your Mind” and “Better than Before” are two highlights of his performance.

Keegan not only has a reputation for its remarkable company of actors, the technical aspects of the show were equally magnificent. The Set, designed by Matthew Keenan, was static, all blue with levels that the actors moved through and against. It perfectly embodied the fragmentation of the interior spaces of the characters.

The solid color of the stage gave lighting designer Allan Sean Weeks a smooth blank canvas to work with. In “Didn’t I see this Movie” he turns the stage to a sickly green. In “Superboy and the Invisible Girl,” he followed Dubberly with a translucent ice blue wash, that makes her look ephemeral, as if she is in fact not there.  One wonders if his perspicacious daughter would approve. Projection Designer G. Ryan Smith took full advantage in the best way of his room to play.

Alison Johnson subtly references the relationship between the characters in her costume design. Natalie emerges in pink, a reference to Diana’s red. Gabe returns in red to Dan, also in red. In “Song of Forgetting” Diana and Dan mirror each other’s outfits, showing an attempt at connection.

In Next to Normal, the Keegan Theatre takes the human mind, unravels it and sews it into a quilt of song and spectacle.  If Breaking Bad or Weeds were musicals they would feel and sound a lot like Next to Normal. In a word: Alive.