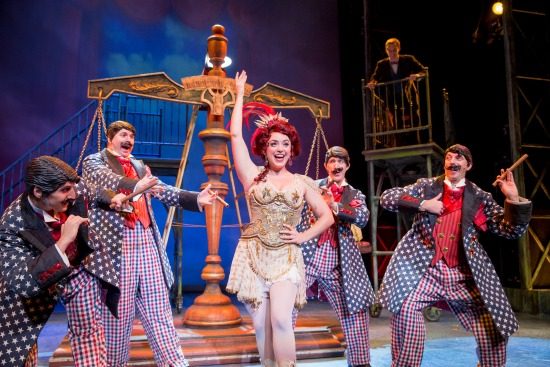 The cast of Ragtime. Photo by Scott Suchman.

Ahrens and Flaherty, the songwriting team behind Ragtime the musical, are probably best known outside of the theatre for their Academy Award and Golden Globe nominated work on the animated feature Anastasia, but they are also widely known inside the theatre for daring and innovative shows including Once on this Island and Seussical the musical. Ragtime was nominated for 13 Tony awards in its first broadway run in 1998, has already been regularly revived, and it is easy to see why. With a book by Terrence McNally, based on the celebrated novel of historical fiction by E.L.Doctorow, it is a show full of big ideas and fascinating stories, which is moving and ambitious. It is a perfect piece for performance at the semi-open-air Wolf Trap National Park for the Performing Arts, the big ideas vividly painted across a big canvas, in a big space. The movement from night to day guides the show from its optimistic start into the more emotionally harrowing details and realities of its delicately interwoven stories, in this exciting touring production.

Ragtime’s main character is the United States of America itself, and ragtime music is its perfect expression at the turn of last century. The musical focuses on the ambitions, fortunes and misfortunes of three groups of Americans, each partially understood by their location, and relationship to ragtime; The African-American community in Harlem, the well-to-do suburbanites of New Rochelle, and immigrants coming from the harbor to the tenements. The score has a traditional modern broadway sound, inflected with ‘Joplin-esque’ gestures and harmony. To say the musical is timely – early on we hear our characters need to “make” America “great”  – ignores the fact that Ragtime is at least as timeless as it will always be timely for societies where racism, the mass movement of displaced people, and the excessive accumulation of wealth – “you can never have enough money” – are pressing issues.

…a powerful and engaging show, wonderfully rendered in this touring production.

The ensemble is outstanding, and Kate Turner, as ‘Mother’, is a standout in the named cast, kind and passionate in every gesture, and song, with vocal strength and assurance. Chris Sams is compelling, and likeable as ‘Coalhouse Walker Jr’ in a demanding vocal performance that felt slightly tired at moments, while Leslie Jackson is captivating as the haunting and tragic ‘Sarah’. Matthew Curiano, the immigrant ‘Tateh,’ evokes our sympathy and forces us to hope too, in spite of his circumstances.

The flow of story, music, and dance in this production is seamless in the capable hands of director and choreographer Marcia Milgrom Dodge. The production is a delight to watch from its well-integrated spectacle, to the more intimate and emotional moments, handled even in such a vast performance space.  Mike Tutaj’s trees in the projection design may have been, unfortunately, overshadowed by the green surrounds of the National Park, but his clouds, and colours are detailed and enlivening, across Kevin Depinet’s elegant scenic design. Gail Baldoni’s costumes are flawless.  On opening night there were a few sound problems in the second half, with voice amplification dropping out, and some EQ imbalances, which were quickly solved.

At the start of Ragtime, a hollow piano sits on stage. It is a recurrent image throughout. It’s hollowness is repeated in Tateh’s silhouettes, which he attempts to sell in order to make his new life in America. Both suggest a gap between how things appear, and how their substance. The stories of nationhood are invariably formed from a tangle of stories, some uplifting, and others unthinkable. Ragtime doesn’t shy away from its silhouettes, and hollow pianos, and while it makes them sing, we are left as distraught by some of those songs, as we are uplifted by others. It is a powerful and engaging show, wonderfully rendered in this touring production. We are, of course, never meant to believe a claim in the very beginning of that show that “nothing much happens in a year,” but it is amazing to think how much can happen in just a few years, under the spell of that “distant music,” ragtime.