Theatre Review: ‘Static’ by Tom Horan at the Source Festival 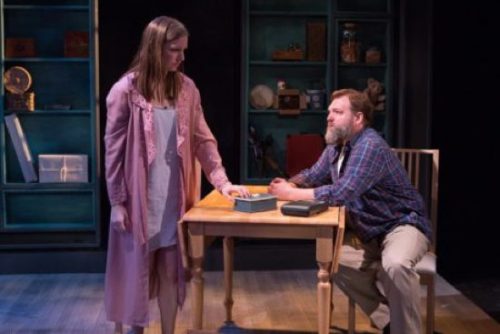 Sound waves travel through the air around us, molecule by molecule until finally, they reach our ears. There are people that touch our lives in this same most fundamental way, and more than any other person in our lives they serve as a glass through which we experience the world around us. Tom Horan’s Static examines the relationship between sound and who we are as human beings.

The plot is simple, a young woman Emma finds herself saddled with the task of cleaning out the house of Walter and Millie Burke, a couple that she has heard stories about ever since she was a little girl. Skillfully directed by Bridget Grace Sheaff, the play unravels like a mystery.

Amy Horan plays Emma, a tightly woven young woman who takes up this mystery at a turning point in her own life. In a masterfully crafted scene, Horan, with only a tape recorder to play off, enthralls with her childhood legend of the Burkes.

Megan Reichelt plays Millie Burke, Walter’s estranged and mute wife, a difficult role that Reichelt performs with graceful ease. In one of her many compelling scenes, she confronts her husband and fills the stage with the magnitude of her presence and the wealth of her pain.

Dylan Jackson adds some comic relief as Emma’s unaffected fiancé, Owen, who later becomes embroiled in this impossible mystery along with Emma.  Charlotte “Lottie” Doughty is a delight as the Girl.

Klyph Stanford’s set is gorgeous, indicative of a house in discord and decay without any superfluous details. Also, loosely indicative of a doll house. Deb Crerie and Kay Rzasa bring a lot of beautiful props into the space that perfectly fit with Walter’s collector of extraordinary ordinary objects. Not least of which is the toy piano, which had to match up with the dialogue and the sound of the music box.

Sound designer Gordon Nimmo-Smith had a lot to play with in this show, with the tape recordings and the creaks and bumps of an old house. It was obvious that Nimmo-Smith put a lot of time into each separate recording and keeping the timing and the levels consistent.

Kara Walla’s design was subtle and simple, with soft innocent pinks for Millie, and more realistic plaids for her husband Walter. The colors and textures often drew parallels between the two couples.

This play is at times spooky, at other times quirky, but always heart wrenching and truthful. I wasn’t kidding when I said there wasn’t a dry eye in my seat. It is a beautiful kind of sadness, one that allows you to look into yourself, and the world around you and discover what the connection is. Like sound waves travel through a thousand molecules in mere seconds, so can we come to realize the world’s secrets and our connection to them.