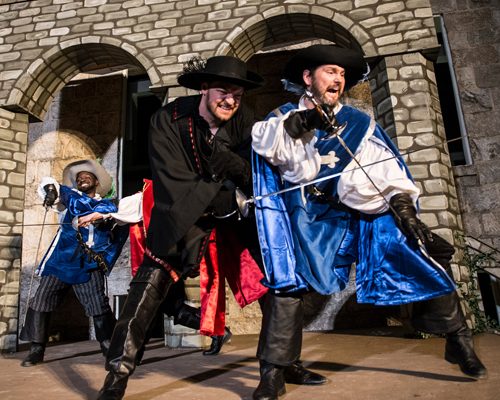 All for one and one for all! The classic, historical romance, The Three Musketeers by Alexandre Dumas, opens CSC’s summer season at the Patapsco Female Institute Historic Park in Ellicott City. This beloved story has been adapted for stage and film countless times, notably in the magnificent 1973 film version, directed by Richard Lester (who also helmed The Beatles’ brilliant film debut, A Hard Days Night.)

The play tells the tale of a naive but brave young man, D’Artagnan (an earnest Brendan Edward Kennedy), trained by his father (Frank B. Moorman) to be a skilled swordsman. The impoverished young nobleman journeys from the countryside of France to Paris during the rule of King Louis XIII (a great turn by Javier del Pilar) and seeks to join the King’s legendary Musketeers with an introduction to its captain, De Treville (Stephen Lopez). The story is narrated by Planchet, gamely portrayed by Keegan Cassady, who performs all the roles of each of the four Musketeer’s servants, sometimes simultaneously, with a change in his voice and utilizing costume devices such as a hat or wing to distinguish between the characters.

The Three Musketeers is a fine summer evening experience for the whole family, especially the kids.

D’Artagnan is accosted and teased by Rochefort (William Krumich) and his men upon his arrival (his “horse” is an interesting twist). The young man then manages to offend the titular characters – a haunted, heart-broken Athos (Kevin Alan Brown), the hard-drinking, hard-fighting Porthos (Daniel Flint, who steals the show) and the pious Aramis (Gerrad Alex Taylor) who often threatens to leave and take up the Church, despite his eye for the ladies. They all challenge D’Artagnan to a duel. The comic scene is interrupted when Cardinal Richelieu’s men confront them and the four join forces. A fast friendship is formed when the Musketeers are impressed with the young man’s courage and skill.

The Cardinal is an ambitious man who seeks to undermine the power of the King to broaden his own. With the aid of his evil cohorts – his right hand man, Rochefort and the treacherous Milday de Winter (Molly Moores), a supposed noble woman with a secret past – the Cardinal (Frank B. Moorman) has uncovered a romance between Queen Anne of France (Lida Maria Benson) and England’s Duke of Buckingham (Michael Reid). He seeks to expose her by having Milady steal two diamond tags from a brooch that Louis had given Anne who, in turn, gives to Buckingham as a token of her affection.

D’Artagnan has fallen immediately and hopelessly in love with Constance (Courtney Feiman), the Queen’s confidant and wife of his flamboyant landlord, Bonacieux (an over the top Eric Poch, also effective in multiple roles). When Constance entreats D’Artagnan to help the Queen, he and the three musketeers embark on an adventure to England to retrieve the brooch before the masked ball where Anne is expected to wear the piece.

The play is full of adventure, romance, swash and buckle – all of which the cast attacks with energy and enthusiasm under the direction of Ian Gallanar, Patrick Kilpatrick and fight choreographer James Jager. Unfortunately the pacing and timing was off overall, possibly due to recent weather challenges, and there were projection issues with a few of the actors.

The biggest problem lies with the simplistic script by John Chambers. It lacked in the emotional depth and sophistication that could (and has, in other iterations) embrace the sensibilities of both children and adults, while still retaining the comic, slapstick elements. The characters were two-dimensional and the antagonists (The Cardinal, Rochefort and Milday) were just shy of that delicious, intimidating villainy found in so many adaptations.

The productions is visually appealing with the multilevel set and lighting design by Daniel O’Brien that blended so well with the historic structure of the site and the gorgeous, detailed costumes by Kristina Lambdin and Heather C. Jackson. High praise goes to the hardworking stagehands but clothing them in simple costumes would help with the necessary intrusion of prop and set changes on the outdoor stage.

There is plenty of audience interaction as well as entertainment before the show and during intermission. The Three Musketeers is a fine summer evening experience for the whole family, especially the kids. Hopefully that last-minute Brexit joke will remain and the pacing will get up to speed throughout the run.