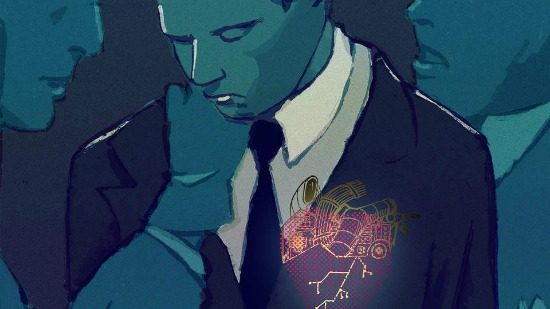 There is much to love in Dial R for Robot, billed variously as “a sci-fi Hitchcock rock opera” and a “multimedia rock opera re-boot.” At its (beating, digital) heart is the eclectic local band Djesben, who play throughout, and establish a suitably intriguing and tantalising mood through their playing, make-up, and physicality from the very opening of the show. Their sound is unique, and catchy, and their melodic lines inventive. Their songwriter and Electric Dulcimer player, Christian Crowley, is also the writer of Dial R for Robot. Incidentally, we all need more Electric Dulcimer in our lives.

There is much to love here…

There is a small and effective amount of audience participation in the piece, with a twitter poll to decide who will play which characters and a fun play-along interlude for the audience and the “Android Band.”  The video elements (by Rob Parrish), and projection (Charlotte Houghton) are probably the best part of the production, admirably integrated into the rest of the piece. They seem to open up a world of possibilities, blending smoothly into the more traditional aspects of the storytelling. The projections are impressively synced to the music at the very opening.

There is much to love here, and so some of the problems are forgiven, however, there are some problems too. The program contains a synopsis, which begins “Dial R for Robot follows the plot of Hitchcock’s Rope,” which might be the case in a general sense but could be confusing to anyone who knows the film. Elsewhere in the program Bladerunner is also mentioned as source material. There is also a healthy dose of robotic history and philosophy included. In the words of the director, “there’s a lot going on here,” and it is all very interesting.

It is not, however, easily followed in performance alone. Some of the problems are technical. There was a large amount of feedback from the mics, even though the difficult balance between band and singers was well handled. Some of the problems are in the writing. There are parts where the vocal writing is too low in the actors’ range for their words to be understood. The entire company also often finds itself directed to simply stand motionless on the stage, looking at the person singing, with little else to do. Though there are plenty of positives in the music, the songs do become a little homogenous, and even new licks which seem promising, turn into very similarly shaped melodies and song structures.

Having read the synopsis after the performance everything was much clearer, but during the performance it was often difficult to understand what was happening and why. It is a credit to the other elements of the production that this wasn’t more of a problem. “How to Vanish in 39 Steps,” a song which introduces a crucial plot point – I later discovered – was an interesting change of pace in the light and pleasant singing tones of Buster Britches, the humanoid robot CJ.

Despite some troubles, Dial R for Robot is enjoyable, and enjoyably offbeat. The costumes, by Yiwen Feng, are great. The lighting (Charlotte Houghton) is effectively used, with glowing ice cubes at the bottom of glasses a beautiful texture next to the set’s Christmas lights.

In the writer’s notes it says the show is the result of three years of research, writing, composing and arranging. Hopefully this first incarnation of the show in performance will lead to a similarly in depth approach to developing the show, allowing that hard work to speak more clearly, and building on the many delightful and interesting aspects already present in Dial R for Robot.

Advisory : Recommended for ages 13 and up.