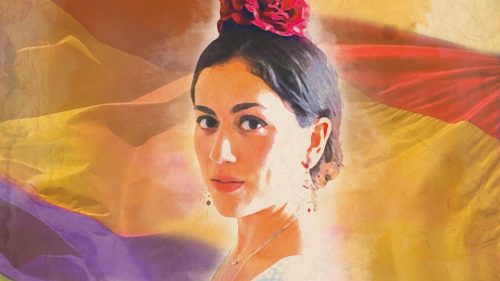 Love in Ruins, written by Paul Handy and directed by Clare Shaffer.

Family can often provide us with some great stories; but with Love in Ruins, Paul Handy took his in-laws story and turned it into a wonderfully engaging play, performed under the direction of Clare Shaffer. All about love in a time of war, in the midst of suffering, against all the odds, this poignant piece has the power to draw you in and make time fly by far too fast.

Mayte, played by the excellently expressive Thais Menendez, is a young woman living in a Valencia on the cusp of war, navigating her way through university, living away from family, and the perils of falling in love. Calvin McCullough plays the character of Guillermo, to whom she turns for comfort.

Although the chemistry between Menendez and Santiago, who plays a love interest of Mayte, felt a bit stilted at times, the cast did well embodying the heightened emotions of love and despair in times of war and loss. Not only that, but the interplay between the characters themselves was absolutely brilliant, and the endearing embodiment of the culture had great integrity as well as a perfect dash of levity, right down to the last painful bite of flan.

The set, made up of only a few pieces of furniture, was simple but sufficient, and the use of imagination and flags was spot on. Costumes were absolutely terrific, especially in the case of the brilliantly cantankerous, proud matron mother (played by the dexterous Sheila Blanc). Background noise in scenes like the library was a bit distracting, but did not take away too much from the performance.

Although the plot of the play itself is incredibly local, the story it portrays has universal resonance and emotional appeal. War stories in the pocket or not, any audience who has ever known love or loss, who has experienced the joy (and pain) of family, and who has navigated a difficult path to hope will fall in love with this play. Hopefully we will see it again!

Advisory: Stand with the bull.

Love in Ruins plays at the Upstairs Theatre at the Logan Fringe Arts Space. 1358 Florida Ave NE through Saturday, 7/23. Tickets are available here.