Theatre Review: ‘The Bridges of Madison County’ at The Kennedy Center 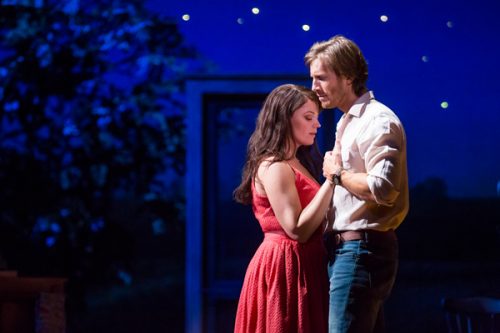 Written by Robert James Walter in 1992, The Bridges of Madison County was first turned into a movie in 1995 starring Clint Eastwood and Meryl Streep. The Tony Award-winning musical The Bridges of Madison County, with Book by Marsha Norman and Music and Lyrics by Jason Robert Brown, made it to the stage in 2013. Francesca (Elizabeth Stanley) is an Italian housewife wasting away in the doldrums of life in 1965 Iowa. The opening number “To Build a Home” tells the years-long story of Francesca’s unlikely journey from the war-torn shores of Naples to the Iowa farmstead. The last 18 years of Francesca’s life is built up around her onstage as she sings, until she is swept back into her present.

…an unrequited love story that will endure a lifetime.

Francesca is looking down the barrel of three peaceful days without her farmer husband Bud (Cullen R. Titmas), daughter Carolyn (a frenetic Caitlin Houlahan) and son Michael (a wide-eyed Brian Welnicki) when a beat-up truck pulls into her driveway. National Geographic photographer Robert (Andrew Samonsky) emerges from that truck a well-crafted caricature straight out of your mother’s romance paperbacks. It’s a bit of an eye roll situation: a tad “corny.” Photographer is one of those mythical, sexy jobs. Handsome and brooding, Robert is an existentialist; he is temporarily lost, the victim of wanderlust. All of Francesca’s stifled urges awaken in the face of Robert’s stories of travel, his tenderness, his individuality and yes, the fact that he is a hunk. Francesca dubs him the “patron saint of bored housewives.” A trip to take photos of a covered bridge turns into an unrequited love story that will endure a lifetime.

Francesca’s family is ever-present. Bud calls Francesca to check-in from the road. Carolyn dreams of marriage and a blue-ribbon prize for Stevie (her cow) at the State Fair, and Michael is an idealist, he just wants to be anything but a farmer. The juxtaposition of two worlds, encapsulated in the plaintive “Who We Are and Who We Want to Be” resonates throughout the musical.

Happily, humor is plentiful throughout The Bridges of Madison County. Humor plays a big role in rounding out Francesca and Robert’s characters and Stanley and Samonsky demonstrate impeccable comedic timing. Francesca’s neighbor Marge (Mary Callanan), having caught on to “situation photographer,” demands to know what her husband Charlie (David Hess) would do if a handsome photographer tried to run away with her. Their loving back and forth is as funny as it is touching.

Director Bartlett Sher, Tour Director Tyne Rafaeli and Scenic Director Michael Yeargan mobilize the chorus to move the set pieces. The dramatic whirling of the set pieces contributes to the feeling that the set is an active member of every scene. After all, the musical revolves around the juxtaposition of Francesca’s in life Naples and her life in Iowa.

The music is what makes The Bridges of Madison County so watchable. Composer Jason Robert Brown was the hero of the night: the surprise Conductor. As a composer, Brown has a distinctive style featuring tight harmonies and dynamic rhythms, which call for a wide vocal range. The Bridges of Madison County features an eclectic range of musical styles from Folk to Honky-Tonk to Blues to Gospel. Brown’s score here also manages to pay tribute to the stylistically accessible and beloved musicals produced in the heyday of the American musical.

Stanley has an alluring come-hither quality reminiscent of Meryl Streep and her voice is expansive and emotive. Her presence fills the stage with warmth and wistfulness. She is well-balanced alongside Samonsky, whose Robert is sincere enough that we believe him when he says (eyeroll), “I have never done this before” before he kisses Francesca. Samonsky has an admirable vocal range and he belts his way through one love song after another, most notably the pre-finale “It All Fades Away.” Callanan’s moment in the sun is memorable. Marge’s “Get Closer” brought my dad back to the days when he and my mom used to dance to on the radio on their farm. Titmas’ Bud is a jovial powerhouse, juggling a plaintive wife and a hectic house of teens before the blowing the roof off the opera house during the Gospel-infused “When I’m Gone.” So there you go, pretty magical.

The musical theatre version (I haven’t read the book) of The Bridges of Madison County leaves gaping holes that are screaming out to be filled with emotional revelations. In their absence, the swift (very swift) approach of the end of a musical that seemed towards the end to drag, smacked me in the face and left me a bit baffled. Powerful and moving, the final scenes encompassed decades of loving decisions left unexplained.

Go for the music and the standout performances. Indulge in the “corny.” Here, the pluses outweigh the minuses.