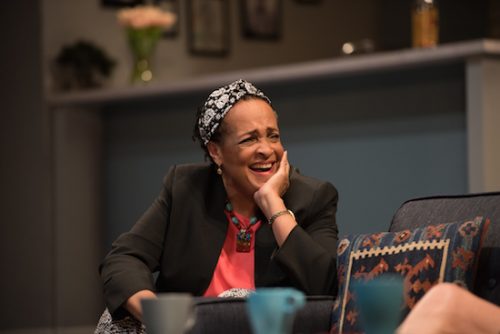 We’re in a nicely-appointed New York flat, the kind with stairs down to the couch that you never see in real life apartments but I swear I saw everywhere on TV in the 80’s.  There is a reunion of four women, Boomer-age radicals who bonded over a protest rally and a spell in jail some 40 years before (which cause?  It was the 70’s, take your pick).  As with any reunion you have old issues, new issues, arguments and reconciliations breaking out every few minutes.

Then the hostess puts on a Motown classic, Marvin Gaye and Tammi Terrell’s “You’re All I Need to Get By,” and everyone rises—some with alacrity, some with time—to dance.  One or two “shake it down” on their own, another pair off to dance arm-in-arm, and they know the song by heart.  It’s a joyful moment; but of course when the music stops each woman retreats slowly to her seat, each visibly reminding us in her own way that they’re not undergrads anymore.

Such is the gentle humor that punctuates Susan Miller’s paean to her generation, 20th Century Blues, a somewhat unfinished but touching meditation on the aging of a generation.  Miller’s subject seems, at first, to be a touch narcissistic—the 60s and 70s crowd telling their kids one more time how great they were—but once you peel back the contemporary references you see the heart of the play, which is its greatest strength.  The growing sense of time slipping by, the inevitable self-consciousness that comes with age, the fear of no longer being needed—let alone underappreciated—and then the even greater fear that at some point they could lose their own memory, lose everything they are.

Director Ed Herendeen has assembled a brilliant cast headed by Betsy Aidam as Danny, the successful photographer about to have her first retrospective at the Metropolitan Museum of Art.  Because of her long friendship with these three other women—her fellow radicals—and their tradition of posing before her camera each year, Danny announces she wants to put their personal, annual portraits on display.  This creates some tension and understandably so, as her old comrades chafe at being asked to sign a release form, and sign away their youth.

Miller’s characters are finely drawn, each with her own history, and the talent assembled here is positively electric; there’s Franchelle Stewart Dorn, who graced the stages of Washington, DC for so many years, as the investigative journalist Mac, whose relationship with Danny was once more than platonic.  There’s Gabby—played with quiet grace by Kathryn Grody—who is the pot-smoking peacemaker of the group.  Grody’s sense of timing, as Gabby subtly defuses the arguments breaking out all around her, is one of the great pleasures of the production.  And Alexandra Neil shines as Sil, the (seemingly) successful, platinum-blonde real estate agent who, like Danny, has taken steps to avoid looking her age.

Some of the frankest dialogue here centers on the question of age—whether and when to show it—and the pressures that a new generation’s own youth cult have imposed on them all.  The Boomer generation that once proclaimed “Never trust anyone over 30!” and had no patience for their own elders now find the tables are turned.  Elders themselves now, they are losing their grip as the technologies they relied on become antiquated; the prospect of transitioning from print to online journalism – Mac’s great dilemma—is one taken with great regret, and more than a little fear for her relevance.

The most compelling moments here, however, center around Danny’s mother Bess, played here with great affection and charm by Mary Suib.  Bess, like so many of a certain age, has begun to lose her memory and with it her mature personality; Miller handles her status with dignity and wit, reminding us that what we are seeing is a mature person’s return to their younger selves.  Bess is once again a child, and the acceptance of that child-like mind renders her decline much easier for all around her to handle.

David M. Barber has created a clever set, and his evocation of sitcoms past with Danny’s 2-level apartment helps to ease you into the action.  Hannah Marsh’s projections are spot-on, beginning with the evocation of a TED-Talk stage where Danny opens and closes the play with a monologue about her work (Shades of Seinfeld here).  Therese Bruck has created costumes that speak to each character’s professionalism and history and D. M. Wood’s lights are equally evocative.

There is a charm to 20th Century Blues, and it deserves a wide audience for its important contemporary message.  But there are also moments when the language becomes either diffuse or too idiosyncratic for the audience to follow.  Miller’s ear for dialogue is sharp, and the bulk of the play flows easily; the challenge is to distinguish between lines that make perfect sense between two old friends—who have developed their own ‘private vocabulary’ over the years—and what makes sense for mere onlookers like us.  Because Miller has created such indelible, likeable characters, it is a shame to lose their train of thought because the language has become too personal to follow.  A problem easily solved, given the talent of the writer engaged here.

Running Time:  2+ hours, with one intermission.