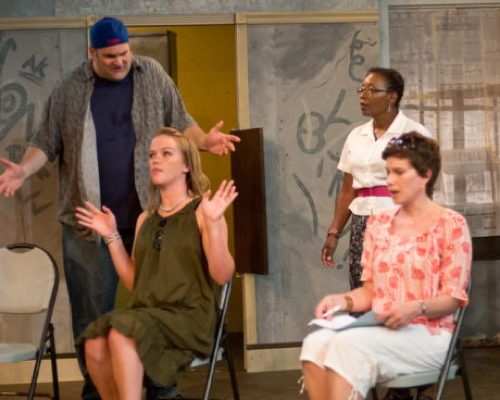 Not much time left to catch one of the theatrical hits of the decade at Silver Spring Stage.

The play uses a clever device, drawing on the American classic Raisin in the Sun (by Lorraine Hansberry) as a backdrop. In the first act, the (offstage) Youngers—Hansberry’s African-American family–have bought a house in an all-white neighborhood from a couple initially unaware of their racial identity. Some of their would-be neighbors vociferously object.

Director Seth Ghitelman has been true to both the frenetic humor and the underlying seriousness of the play.

In the second act, taking place 50 years later, a white family wants to repurchase the house, tear it down, and rebuild it on a bigger scale. Here the opposition comes from the housing board in what has become an all-black neighborhood.

Though the emphasis of what many call a “comedy” (I’m not sure why) is on the relationship between race and property, clearly the play has wider implications. Using a fast pace, overlapping dialogue, word play, and even offensive racial (and sexual) jokes, Norris does make us laugh. The audience on July 10th certainly did, but the play also leaves us with much to think about and perhaps a sense of pessimism.

Even within the comic elements, there is a tragic subtext—relating to the son of the sellers in the first act. A Korean War veteran, he committed suicide after being accused of atrocities against civilians.

What should draw people of good will together—this tragedy–is merely cause for more bickering among the highly emotional characters.

Director Seth Ghitelman has been true to both the frenetic humor and the underlying seriousness of the play.

Norris has set up the play so that each actor in the first part—which takes place in 1959—is likewise cast in the second, in 2009. The actors get to show their versatility, in most case playing two totally different characters.

By and large, they are up to the task, and it’s fun to watch the switch.

In Act I, Michael Kharfen plays the overwrought seller of the house, furious at the intervention of neighbors he feels shunned his son and therefore helped drive him to suicide. In Act II, he is the loud, tattooed workman who interrupts the meeting.

Julie Zito is Russ’s wife, Bev, in Act I—a woman in touch with her grief but also clueless about her African-American maid’s thinking. In the second act, she is the sophisticated lawyer of the couple trying to buy the house.

Gayle Carney portrays the smart but outwardly subservient maid, Francine, in Act I and the more confrontational member of the housing board in the second.

David Corsline plays the clergyman Jim in Act I, then the gay lawyer in Act II. But both characters share a certain ineffectuality.

Brad Eaton is the polite Albert, Francine’s husband, who is really seething with anger in Act I, and the more rational of the board members in Act II.

Matthew Gallant has similar (and memorable) roles—as the threatening neighbor Karl in Act obsessed with “property values” and the vulgar bigot Steve in Act II.

Paige Fridell is free from the ruckus in Act I by virtue of being the deaf Betsy, but is in the fray as Lindsey, part of the couple trying to buy the house.

Win Britt appears briefly as Kenneth, the late son of Russ and Bev.

Fighting, both verbal and physical, is key. Kyle MccGruther choreographed it.

Maggie Modig designed the set; Bill Strein did the lighting; and Roger, the sound.

Harlene Leahy designed the costumes for both time periods, while Sally Cusenza is in charge of makeup and hair, including wigs.